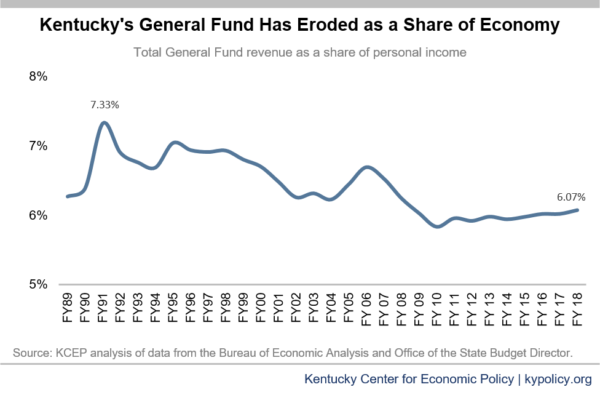 As a share of the economy, Kentucky’s General Fund is worse off now than before the last positive effort to clean up the tax code and raise substantial new revenue under the Kentucky Education Reform Act (KERA) took effect in 1991 – 6.07 percent in 2018 compared to 6.39 percent in 1990 (see graph below). Due to the growing number and size of tax breaks in Kentucky’s tax code, General Fund revenue has eroded relative to the economy for the two-and-a-half decades since KERA.

Though the difference between the General Fund as a share of the economy in 1991 after the passage of KERA and in 2018 is just 1.26 percentage points, that represents huge revenue losses. If the General Fund in 2018 was 7.33 percent of the economy instead of 6.07 percent, we would have had $2.24 billion more to restore funding for K-12 schools and make college more affordable, address our addiction and child protection crises and shore up pension systems, among other needs.

Changes made to the tax code by the 2018 General Assembly will result in a very small uptick in revenues for the short term, amounting to only 0.1 percent of the economy. Over time, the new law’s shift in reliance from the income tax, our strongest major revenue source, to slower growing sales taxes and declining cigarette taxes will further compromise our ability to collect adequate funds.

Good changes to the tax code would have meant improving our ability to invest by asking more from those at the very top of the income scale who are taking home the lion’s share of economic growth, and tightening loopholes that allow large corporations to avoid taxation. But the 2018 General Assembly did the exact opposite. The 2018 changes will likely result in the need for additional tax increases in the future simply to tread water.