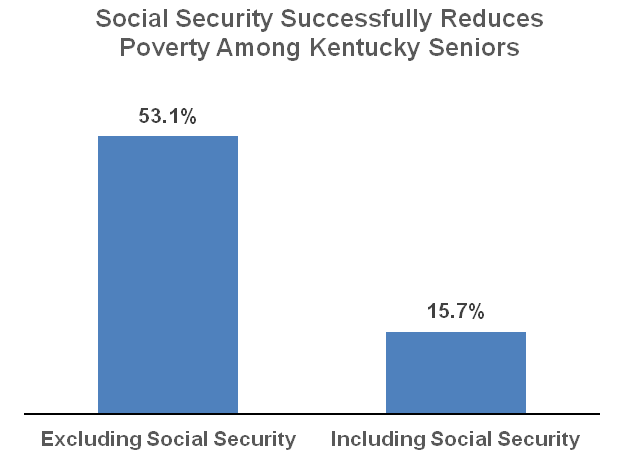 Social Security helps nearly a million Kentuckians make ends meet, cuts senior poverty dramatically and supports local economies by ensuring more people have money in their pockets to spend, as outlined in a a new report by the Center on Budget and Policy Priorities.

The report shows a total of 936,497 Kentuckians received Social Security benefits last year, 263,000 of whom would have otherwise been in poverty. Social Security doesn’t just benefit seniors, but children dependents as well; in Kentucky 63,882 children benefited from Social Security.

Still, if it weren’t for these benefits, 53.1 percent of Kentucky seniors would live under the poverty line, causing great hardship for them and economic stress in their communities (a 2013 AARP study found that every dollar spent through Social Security generates two dollars in the economy).

Social Security is a vital part of retirement security. Alarmists often claim Social Security won’t be around in the future, but the program can be protected with relatively modest revenue adjustments in the future. A trust fund was created to protect Social Security in 1983 as the baby boomers retire, and even when it is used up in 2034, incoming revenue will still be enough to cover three-fourths of the cost of benefits.  Simple changes can be made to protect the program  without reducing benefits or creating short-term disruptions, such as:

Social Security is not just a pension, it’s an anti-poverty tool that protects our most vulnerable – seniors, children and the disabled — and it’s an economic engine that boosts local economies when those dollars are spent. Decision makers in Washington should build on this program, and choose policies that ensure its long-term success.