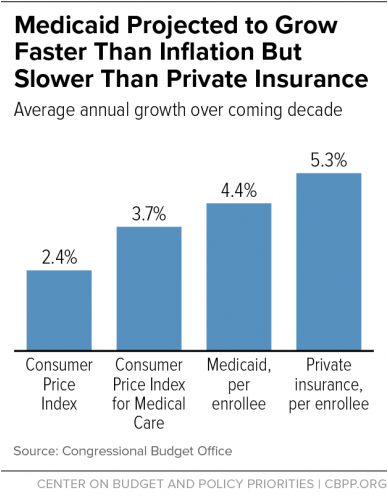 The Senate released the discussion draft of their bill yesterday to repeal the Affordable Care Act (ACA). If passed, the Senate proposal would be a terrible setback for the 1.4 million Kentuckians covered by Medicaid as well as all Kentuckians who benefit from the patient protections and assistance buying coverage contained in the ACA.

Nationally, the Congressional Budget Office (CBO) estimates that it would end coverage for 22 million Americans and drive up health care costs for nearly everyone else.

Over 473,000 low-income Kentuckians have gained Medicaid coverage because the state chose to expand eligibility through the ACA – a choice that resulted in more low-income people getting access to care and on a path toward better health, as well as improvements in Kentucky’s economy. The Senate bill would eliminate Medicaid expansion through a three-year phase-out of extra federal funding for expansion-eligible enrollees starting in 2021. While the House ACA repeal bill only applied the lower federal funding rate for new enrollees, the Senate phase-out would apply the lower match rate to current and new enrollees. One estimate indicates Kentucky would have to pay $853.8 million more a year in 2024 to maintain coverage for this group of low-income Kentuckians. States have always had the option of covering people who have a higher income than what the traditional Medicaid program allows, but very few states chose to pay the extra cost to do so in the past.

One of the most damaging parts of the Senate bill has nothing to do with the ACA at all, but would change the way the original Medicaid program was structured over 50 years ago. Under the Senate plan, the federal government would pay a set amount per enrollee, called a per capita cap, rather than simply pay a share of all Medicaid health care costs. That amount would then be increased at the same pace as general inflation (starting in 2025), known as the consumer price index (CPI). CPI grows more slowly than the cost of medical inflation, private insurance per-enrollee or Medicaid coverage per-enrollee (most importantly) as seen below. The end result is Kentucky will have less and less funding to pay for the care of the children, pregnant women, seniors and people with disabilities who rely on Medicaid coverage.

Additionally, the bill no longer requires states to provide the 10 Essential Health Benefits for Medicaid enrollees. These benefits include a basic set of services like hospitalization, lab work, preventive care, behavioral health care, addiction treatment and prescription drugs. The bill then further erodes Medicaid coverage by writing into law the option for states to require work from those covered by Medicaid, a radical change that has never been allowed before. It also gives states the option to receive funding through a block grant, which makes it even less responsive to a state’s health care needs. States would then be able to alter their programs much more than has ever been allowed and severely limit coverage for vulnerable and low-income people.

Combined, the senate bill cuts $772 billion from expanded and traditional Medicaid over ten years, with those cuts accelerating in the tenth year.

A prior estimate based on the House version of repeal said, combined with the cuts to the expansion, a total of $16 billion in cost would be shifted to the Kentucky state budget over 10 years. With such a large funding gap, lawmakers in Frankfort would almost certainly end Medicaid expansion and scale back traditional Medicaid. This would leave as many as 535,600 previously covered Kentuckians without Medicaid coverage according to an estimate based on the House bill. The CBO predicts that of the 22 million losing coverage, 15 million would be people no longer covered by Medicaid.

Rolls Back Premium Assistance for People Purchasing Insurance on the Exchanges

The Senate bill keeps the basic structure of the ACA marketplace subsidies, but dramatically scales back the financial help older and low-income Kentuckians would receive for purchasing insurance. At the same time, it increases what older people can be charged for insurance from three times more than younger people under the ACA to five times more. For a 60 year old in Kentucky with an income at 300 percent of the Federal Poverty Level, that means premiums after tax credits for the same coverage they have now would be an estimated $4,281 a year higher.

Additionally, the bill cuts off income eligibility for help paying premiums at 350 percent of the Federal Poverty Level (FPL), or $42,280 for an individual, rather than 400 percent FPL under the ACA. In Kentucky, there are more than 32,000 people who are in this income range, under 65 years old and didn’t get coverage from work or other government programs like Medicare or military coverage. A 60 year old Kentuckian with income just above 350 percent of poverty would lose an estimated $5,110 a year in assistance buying insurance.

At the same time premiums rise under the Senate bill, out-of-pocket health care costs like deductibles, co-pays and co-insurance will rise too. First, the Cost Sharing Reductions (CSRs) that help reduce out of pocket health care spending for marketplace enrollees will be paid through 2019, but will end after that. This means the 41,209 Kentuckians receiving CSRs will have to pay more up-front for care starting in 2020.

The other cost increase comes from lowering the share of health costs an insurance company must pay for an enrollee’s care. Right now, a silver plan on the health insurance marketplace – which the government considers the average plan that provides adequate benefits – covers 70 percent of costs. The Senate plan lowers that standard to 58 percent, which would increase out of pocket spending by 40 percent on average for those plans.

The Senate bill rolls back patient protections in several ways. First, the bill requires states to set the limit on how much profit an insurance company can keep relative to what they pay in claims starting in 2019. It is this cap that protects people in counties with only one insurer from the effects of a monopoly since the companies can’t run up their profit margins. In fact, since this limit was put in place, insurance companies have refunded Kentucky insurance customers over $33 million. It is likely that when this control is handed back to the states that there will be pressure on lawmakers to allow insurance companies to charge more in premiums so they can pocket more in profits– which the CBO expects to happen under the proposed legislation.

Another protection set in place to ensure lower premiums for quality insurance are the individual and employer mandates in favor of a 6-month lockout period for people who don’t maintain continuous coverage. It is through the requirement that everyone have health coverage that insurance companies can offer policies to less healthy Kentuckians at the same rate as healthy ones. By repealing this provision and threatening a lockout for people with coverage gaps, it is possible that healthy people will take the risk of going without coverage, which will force insurers to increase premiums for everyone else or decide not to participate. in fact, the CBO estimates that the primary reason for the initial drop in coverage is healthy people will choose to go without insurance, even under a lockout provision. An insurer in Pennsylvania recently stated that if the government did not enforce an individual mandate then their premiums would be 14.5 percentage points higher. The risk of an insurance “death spiral” is very high with this provision of the Senate bill.

The bill also makes significant changes to the 1332 State Innovation Waivers to allow states to opt-out of several patient protections. While it is not immediately clear what all the implications of this change would be, it appears that the waivers would be broadened so states could choose not to require the Essential Health Benefits or to no longer ban annual or lifetime spending caps. It also allows states to make changes that could reduce the number of people covered or the level of benefits offered, which they are not allowed to do under current law. If states can waive requirements that plans cover Essential Heath Benefits, people with pre-existing conditions in the individual market will have difficulty finding affordable plans that cover care for their conditions. The CBO expects about half of the population to live in states that request such waivers, though the details of each state’s changes would differ widely.

The billions cut from Medicaid and insurance subsidies are used to pay for $541 billion in tax breaks, which will almost exclusively benefit the wealthy. According to one estimate, 91 percent of the tax cuts in the House version of the bill  would benefit the top 1 percent of earners in Kentucky, who would receive an average tax break of $11,060. Only 29,406 Kentuckians would see any tax cut at all.

Kentucky’s rate of uninsured has dropped by 55 percent since 2014. Since then newly insured Medicaid enrollees have gotten needed care, hospitals have seen their uncompensated care plummet and our economy has seen a boom of health care jobs. Sick, old and low-income Kentuckians who were once uninsurable or could not afford insurance have been able to get care without fear of seeing coverage cut off when it is needed most or facing bankruptcy from unpayable medical bills. The changes outlined in the Senate bill would be devastating and take our health care system even further back than before the ACA.