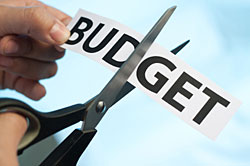 Both the House and Senate versions of House Bill 305 close a sizeable hole in the state’s Medicaid budget for 2011. The House version claims potential savings through use of managed care and efficiencies in the Medicaid program in 2012, while the Senate plan pays for closing the hole with $148 million in cuts in 2011 and 2012. The Senate cuts reduce funding for K-12 education by $47 million, higher education by $28 million, health by $18 million and other programs by $55 million.

Kentucky’s budget for 2011-12 made two key assumptions about Medicaid. First, it assumed that the state could find General Fund cost savings of $209 million over the biennium. Second, it assumed that the federal government would extend the higher Federal Medical Assistance Percentage (FMAP) that had been part of the Recovery Act over the second half of fiscal year 2011. The higher FMAP was intended to provide fiscal assistance to the states at a time of higher Medicaid enrollment, and simply provides more federal dollars for every state dollar that is spent.

However, the state has so far only identified $167 million of the needed $209 million in two year cost savings. And in August Congress extended the enhanced FMAP but at a lower rate than the state had assumed, creating an additional $100 million deficit in state funds. The combination of these factors creates a $139 million hole in the General Fund budget in 2011 and a $3.4 million hole in 2012.

Governor Beshear proposed and the House passed House Bill 305, a plan to move $139 million in General Fund money from 2012 to 2011 to plug the hole along with an additional $27.5 million to allow Medicaid to process payments in 2011 at the highest possible federal match rates. Beshear’s proposal is to close the resulting 2012 gap through increased use of managed care and ongoing efficiency measures to control Medicaid costs.

The Senate passed a version of HB 305 that fills the 2011 gap in state Medicaid money, but does not count on the administration being able to achieve the additional savings in Medicaid through managed care and efficiencies. Instead, it makes $148 million in cuts in 2011 and 2012 to balance the budget in addition to making other changes outlined below.

Failure to come to some agreement and put more state money into Medicaid this year would result in $600 million in cuts to Medicaid before June 30, 2011. The state is not allowed to reduce eligibility so cuts will have to come from an estimated 30 percent reduction in provider reimbursement rates or from eliminating optional services to Medicaid beneficiaries. The State Budget Director reports that benefit reductions would be difficult to implement by June 30.1 In addition, a 30 percent reduction in provider reimbursement rates would impact thousands of healthcare employees and the economic well-being of the communities in which they live.2

The Senate’s version of HB 305 includes reductions in several areas at an average rate of 0.525 percent for the remainder of FY 2011 (reductions are not made in education in 2011). With only about four months left in the fiscal year, these reductions are equivalent to more than 1.5 percent cuts for a full budget year. The FY 2012 reductions are a higher 2.26 percent for most agencies, and 1.33 percent to the SEEK education formula. Total cuts for the two years are $148 million. Table 1 includes cuts by major Cabinet, branch or function; Table 3 includes detailed cuts.

The Senate version of HB 305 reduces funding for the Department of Education, including $38.6 million in cuts to the state’s Support Education Excellence in Kentucky (SEEK) funds. The eight state universities and the community and technical college system receive additional funds for this fiscal year (to meet the maintenance of effort requirement described in endnote 2), but will make up for that with cuts of roughly four percent next year. The net cuts to these institutions total $22 million. Other postsecondary education programs including financial aid programs receive cuts of $5.8 million over the two years.

The Cabinet for Health and Family Services will receive the needed Medicaid Benefits funds this year, but will be cut in all other areas in the remaining months of the fiscal year and in 2012 for a total of $18 million. Large cuts include $8.7 million to Community Based Services and $5 million in funding for Behavioral Health and Intellectual Disabilities. Other cuts include $17 million to the Justice and Public Safety Cabinet and $8.5 million to the Judicial Branch of government.

Proposed Reductions are on Top of Years of Cuts

The Senate’s proposed reductions are on top of several years of budget cuts that the state has made since the recession forced severe revenue declines. While the $3.4 billion in federal Recovery Act money has gone a long way in shielding even deeper cuts, the state has made reductions to a range of programs and services, and the end of the Recovery Act assistance this summer could mean even deeper cuts down the road.3 Table 2 compares the originally enacted 2008 General Fund dollars for a selected set of programs with the proposed 2012 General Fund appropriations for those programs in the Senate Committee Substitute to House Bill 305. These estimates are in nominal dollars, and therefore do not reflect changes in the cost of services over this four year period. A range of state programs and services have experienced this level of decline in General Fund support.

The Senate Committee Substitute to HB 305 finds additional dollars through fund transfers totaling $6.2 million and by assuming a revenue surplus in FY 2011 to the tune of $22.4 million that is not part of the estimates provided by the state’s Consensus Forecasting Group. The revenue surplus is assumed from the Office of the State Budget Director’s interim forecast, which is based on the first six months of the fiscal year. That report estimates that the General Fund will have $53 million above projections at the end of the year, but is an unofficial estimate.4 State law requires that official estimates come from the Consensus Forecasting Group, but revisions can only be requested by the Legislative Research Commission as a whole or the state budget director.5

The Senate version of the bill requires that the state avoid additional debt restructuring to fill remaining budget gaps beyond what was originally budgeted for the biennium. In addition, the Senate reinstates language proposed during the 2010 Extraordinary Session that requires the Governor to make reductions to non-merit employee expenditures and government contract expenditures. The Senate requires that the Governor demonstrate implementation of all cost cutting measures outlined by the bill and certify achieved savings from those measures before utilizing state employee furloughs for any additional budget reductions.

The Senate plan reinstates the requirement that all new and renewal applications for the Kentucky Children’s Health Insurance Program (KCHIP) include face-to-face interviews, and the plan requires continuation of face-to-face interviews for new and renewal applications to Medicaid (excluding institutionalized Medicaid recipients). In addition, any Medicaid savings achieved through efficiencies or managed care may not be used to “increase or expand optional services, optional beneficiaries, or Medicaid reimbursement rates, unless the expansion of existing services by a managed care provider can be demonstrated to provide an overall cost savings and improved outcome.”

The budget bill also loosens rules related to class size, use of kindergarten aides, and preschool certification standards in association with the education budget cuts.

Frankfort Should Be Having a Revenue Discussion

Missing from the alternatives in front of the legislature is consideration of revenue options as part of a balanced approach to addressing the budget challenge. Whether or not the governor’s proposed savings from Medicaid materialize, Kentucky is likely to continue facing ongoing budget problems in the coming years, and the state has already deeply cut many services. If the legislature passes the Governor’s budget and the Medicaid savings do not materialize, the state has an even more serious imperative to consider revenue. Necessary reforms to the state’s tax system could both provide revenue to help ease budget woes and better align the system to future needs.

The Kentucky Center for Economic Policy (KCEP) conducts research, analysis and education on important state fiscal and economic policy issues. KCEP seeks to create economic opportunity and improve the quality of life for all Kentuckians. Launched in 2011, the center receives support from foundation grants and individual donors and is an initiative of the Mountain Association for Community Economic Development (MACED).