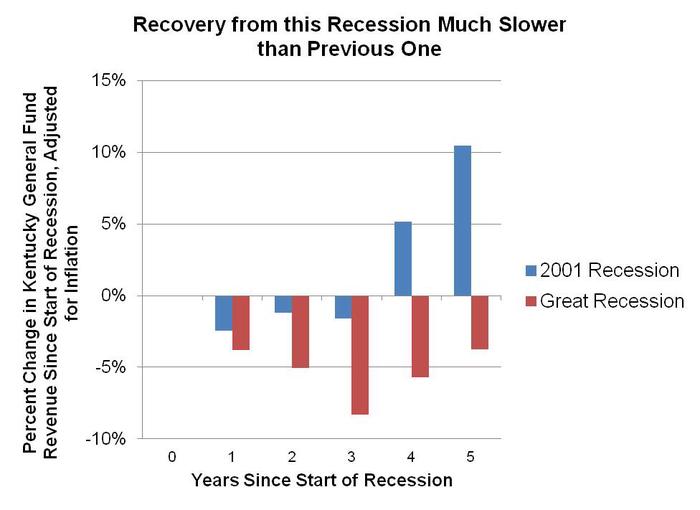 The debate over pensions in Frankfort hinges in part on whether the state should raise additional revenue to help make the pension payment or dig into the rest of the budget to find the funds. The weakness of the current economic recovery is one reason more revenues simply must be generated.

Revenues recovered more quickly in 2001 both because the recession was less severe and because the state passed a tax modernization package in 2005 (year 4 after the 2001 recession) that at least temporarily raised additional dollars. Unfortunately, that revenue bump was designed to phase out and become revenue neutral, and the legislature then held a special session in 2006 to roll back some business tax increases that had been included.

This time around, the only revenue boost was a small alcohol and tobacco tax increase in 2009. And the recovery continues to be too weak to get the state back on track—revenues are expected to grow only 2.4 percent in 2013 and 2.3 percent in 2014, years 6 and 7 after the start of the recession. Inflation is currently expected to be 1.5 to 2 percent in those years, meaning real revenues will continue to be below 2007 levels.

The legislature will meet again in January to craft a new budget with extraordinary pressures on the limited dollars that will be available. The current budget was balanced only after $1.6 billion in painful cuts, and was patched together using one-time money that won’t be available next time. The weak economy will mean continued higher need for services, while health care inflation, demands on the education system, federal budget cuts and the aging of the population will add more strain. And without reform, the tax system doesn’t generate enough revenue to keep up with even modest economic growth.

Kentucky needs additional revenue for a budget that comes anywhere close to moving the state forward.

Note: Blog uses the consumer price index as the inflation measure, which is an underestimate of inflation for state services in part because health care makes up a substantial portion of state costs and typically grows at a faster rate.