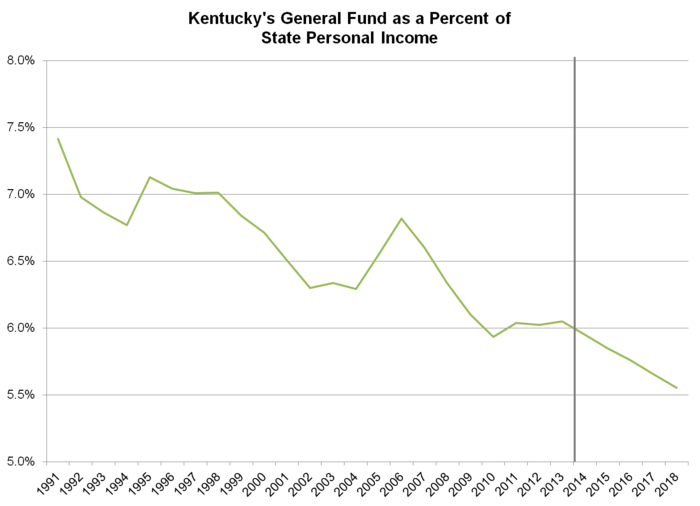 The new long-term revenue forecast of the state’s Consensus Forecasting Group (CFG) suggests that Kentucky’s tax system will continue to deteriorate over the next four years, meaning tight funding for education, health care and other vital services.

In its first in a series of projections that will culminate in January with an official revenue estimate on which Kentucky’s 2014-16 budget will be based, the CFG chose a modest forecast for General Fund revenue growth. But as a share of the state’s economy, General Fund revenue is expected to decline.

Source: KCEP analysis of Bureau of Economic Analysis, Global Insight and Office of the State Budget Director data; 2014-2018 data is from the control forecast adopted at the August 15, 2013 Consensus Forecasting Group meeting.

As the figure shows, the trend is not new. In 1990, state lawmakers passed new revenue measures as a part of the Kentucky Education Reform Act (KERA) to generate and sustain adequate funding for equitable, quality K-12 education—the largest portion of General Fund expenditures—that did not come at the cost of other essential public services. But because additional necessary reforms have not been made to the state’s inelastic tax code, the level of funding KERA achieved has eroded over time. Experts have predicted that if the state’s tax system is not reformed, the gap between revenues and expenditures could grow to $1 billion by 2020.

The poor performance of Kentucky’s sales tax, for example, can be partly attributed to its outdated, narrow base that does not tax most services. Sales tax revenue has actually declined three of the last five years. The income tax, corporate taxes, property tax and other taxes don’t perform as well as they should because they have too many exemptions, exclusions or other structural problems.

Slow growth in employment and wages and weak economic growth overall are also driving the revenue forecast. The General Fund estimate for FY 2014 is still below its prerecession level once you adjust for inflation.

The modest revenue growth the CFG predicts for FY 2015 ($259 million) is less than what the state budget director says is needed ($400-420 million) to replace $157 million in one-time funds used on recurring expenses, make full payments towards Kentucky’s pension system ($128-$148 million) and pay for inflation in health care prices ($115 million). That would mean no new money for education, health, human services and other areas that have been cut by $1.6 billion over the last 7 years, and no money for employee raises.

On top of a weak economy, years of funding cuts and freezes, a still-short pension fund and a deepening structural deficit, the next state budget will also be squeezed by decreased federal funding through sequestration and other cuts. Our leaders in Frankfort and Washington must find the will to fund the public services that are so critical to our economic future.