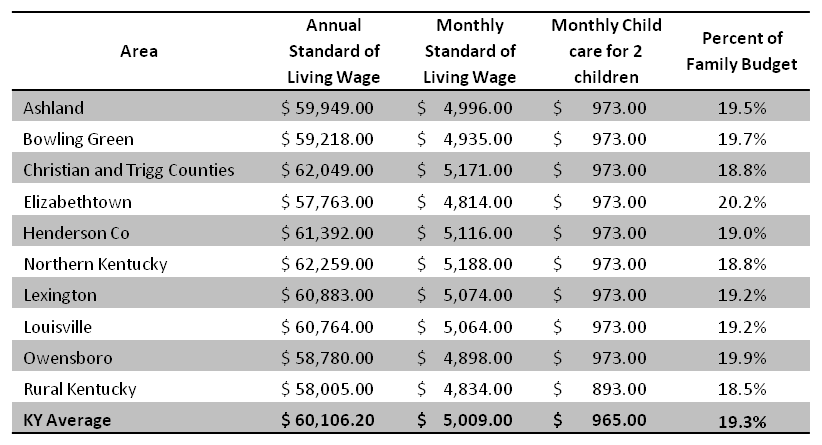 A new report by the Economic Policy Institute (EPI) shows child care is a heavy burden on Kentucky families’ pocketbooks, reiterating the need for more child care assistance in the state.

In almost every community in the country, families spend more than 10 percent of their budget on child care, the benchmark for affordability established by the Department of Health and Human Services (HHS). In Kentucky, the median income for a family of four in 2014 was $54,000, with families spending an average of 22.5 percent of their income on child care for two children.

Kentucky’s Child Care Assistance Program (CCAP) provides subsidies to help with the cost of care, but eligibility is limited and payments to child care centers are low. While some of the cuts that have been made to this program have been rightfully restored, this study illustrates just how deep the problem of child care affordability is and how much more assistance is truly needed.

Affording child care is an even more serious problem for those in low-wage jobs. According to the report, a full-time, year-round minimum wage earner in Kentucky spends 40.4 percent of his or her salary to pay for child care for a four-year-old. Because infant care requires more staff and licensing, it’s even more costly, so that the same minimum-wage earner with a newborn would need to spend 41.9 percent of his or her income on care.

Higher-education state budget cuts and tuition increases have put greater burdens on students and their families, so comparing the cost of a year of child care to a year of in-state public college tuition is a telling benchmark. Child care for a four-year-old is 70 percent as expensive as in-state tuition in Kentucky ($8,196). When you make the same comparison for an infant it rises to 72.9 percent.

According to EPI, a two-parent, two-child household in Kentucky needs to earn $60,106 annually in order to secure a modest, but adequate standard of living. Even if a family were to achieve this standard, they would still pay close to 20 percent of their monthly income on child care, twice the HHS threshold.

The study underlines the need for state lawmakers to increase the eligibility limits and payments for child care assistance to bring Kentucky back toward the established benchmark for affordable child care. As the table above shows, there is plenty of work to be accomplished to get there.