Expanding expungement in Kentucky is good for health, according to new research published by the Louisville Metro Department of Public Health and Wellness. The report details the findings from a Health Impact Assessment conducted to inform lawmakers about the potential health implications of changes to the state’s existing expungement policy. Among the report’s recommendations are changes proposed in House Bill (HB) 327 sponsored by Rep. Kevin Bratcher, which would result in the automatic expungement of charges that are dismissed or result in an acquittal.

The Health Impact Assessment highlights the many ways a criminal record takes a toll on health by making it harder to earn income, secure stable housing, meet nutritional needs and attain higher education (which is associated with improved opportunities for economic security and health).

For these reasons, the report states that “Expunged records help people provide for themselves, support their children, live healthier lives, and grow the economy.”

Kentucky has moved forward with important policies in recent years that enable expungement for some nonviolent felony charges after a waiting period, with a new law reducing the cost of the expungement process somewhat for applicants. However, the Health Impact Assessment’s survey of individuals previously seeking expungement found significant barriers remain: 72% of those surveyed reported that a primary barrier is cost, and other barriers include not knowing what to do (50% of respondents) and being unable to find a lawyer to assist (12% of respondents). The survey data was gathered from 215 individuals attending 4 separate expungement clinics in Fayette, Shelby and Jefferson Counties.

The charts below, which were published in the report, show the many ways a change in expungement policy can have important impacts on health, including decreasing chronic disease and injuries, improving recovery from substance use disorders, and benefiting mental health. 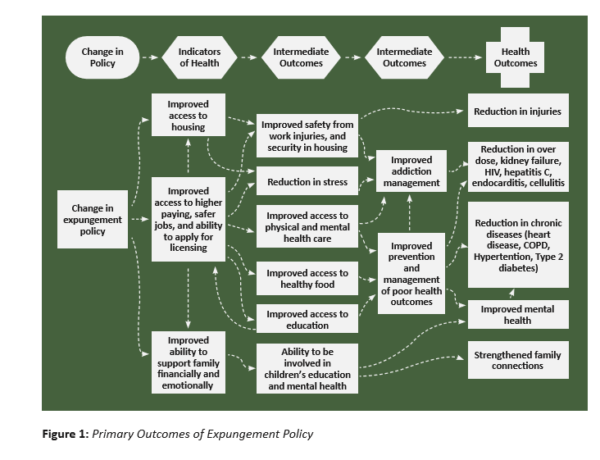 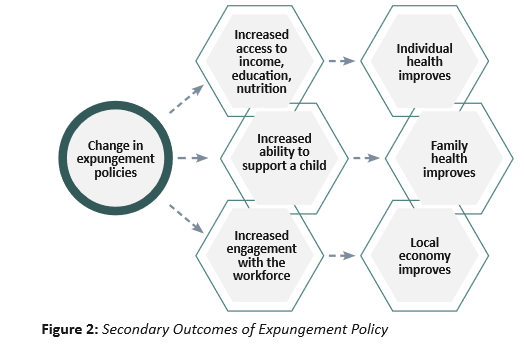 Another recommendation in the report is proposed in HB 327 this legislative session, which would automatically expunge charges acquitted and dismissed with prejudice. One study found that 25% of all felony cases ended with a dismissal. Though this means those individuals were not convicted, the charges may still show up on their record. It’s estimated that 9 in 10 employers, 4 in 5 landlords and 3 in 5 colleges use background checks, so such incorrect records can create barriers in numerous aspects of a person’s life.

HB 327 has already passed the House and is expected to be heard in committee in the Senate as soon as this week. Passing this legislation would be an important incremental step forward.