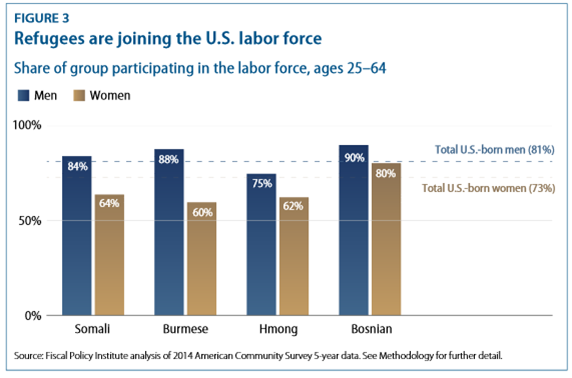 A recent report from the Center for American Progress (CAP) shows  Kentucky is home to refugee populations that rank our state and some metro areas among those with the largest identified refugee communities across the U.S. Using Census data to look at four groups in particular — Bosnian, Burmese, Hmong, and Somali, who together make up about one in every five refugees resettled in the U.S. since 1982 — the report explores their success at integrating into and contributing to their new communities.

As CAP discusses, Kentucky has the 13th largest Bosnian population, the 14th largest Burmese population, and is tied with South Dakota for the 9th largest number of Bosnians as a share of total population — 8 refugees per 10,000 residents. Louisville ranks 14th among metropolitan areas for its Somali refugee community and 31st for the 4 refugee groups combined. In Bowling Green, Bosnians and Burmese combine to make up 24 percent of the total immigrant population, giving it the 7th largest community in the nation of the 4 refugee groups as a share of the total immigrant population. More generally, Kentucky is one of the most welcoming states to all refugees (top 20 percent), with 68 refugees per 100,000 residents in 2013 and 2014.

By definition, refugees are people who are outside of their countries and cannot return because of a well-founded fear of being persecuted for reasons of race, religion, nationality, membership of a particular social group or political opinion. Because there is a lengthy application and screening process which can take up to 18 months before refugee status is granted, all refugees are well-documented and are of legal status in the U.S.

In addition to starting businesses at a slightly higher rate than their native-born neighbors, refugees contribute economically to Kentucky by joining the labor force, paying taxes and supporting local businesses. And while refugees are not economic migrants who primarily seek job opportunities, they quickly become a vital part of the workforce. CAP finds that over the long term:

The UN’s announcement that the world now has more displaced people than after World War 2 calls for a renewed awareness of the plight of refugees. In 2015 alone, 12.4 million people were designated as refugees, and the severity of the crisis was made vivid through the images of refugees arriving on the shores of Europe by the thousands. In the current political climate, opponents to immigration have denounced longstanding policies for resettlement, sometimes by characterizing refugees as a threat to our nation’s security. But immigration has been a foundational part of U.S. history and we continue to benefit from refugees’ commitment and successes, their participation in our local economies and communities, and their additions to our cultural diversity and vibrancy.