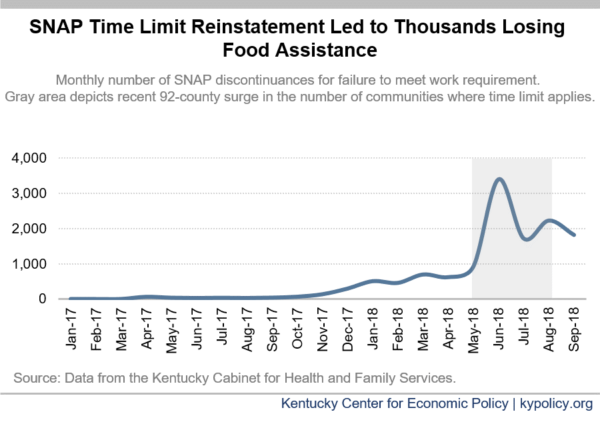 Since May, 10,097 Kentucky adults have lost food assistance as a result of new barriers to Supplemental Nutrition Assistance Program (SNAP) participation erected by the state. Beginning in February, the state started reinstating, on a county-by-county basis, a three-month time limit on how long adults without a disability or dependents can receive SNAP benefits without working an average of 20 hours per week. Over 54,000 adults in 112 counties (including the 20 counties where time limits were in place before February) are now subject to this requirement.

New data shows almost one in five Kentucky adults who could lose food assistance due to the three-month time limit have done so.

As a result of the increase in the number of counties with the three-month time limit starting in February, Kentuckians began losing food assistance in large numbers in May. Since May, very few adults who lost food assistance for this reason have regained their SNAP benefits, with only 34 people re-entering the program through September.

The total number of SNAP participants is now as low as it has been since 2005, in large part due to a sustained economic recovery, but also because of the new time limit. Enrollment changes have been relatively small during the past 12 years, with the notable exceptions of the glitch-filled launch of Kentucky’s online public assistance enrollment platform called “Benefind,” and the recent reinstatement of the SNAP time limit. 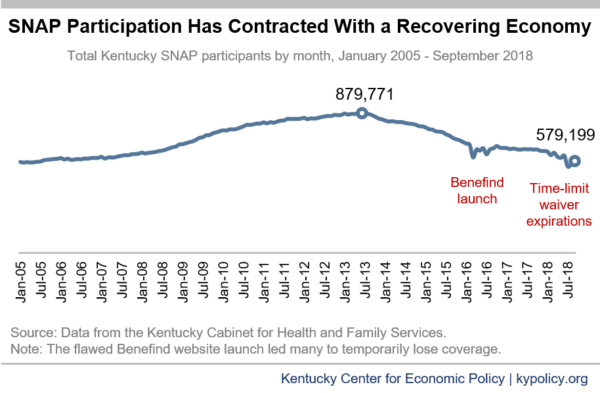 Across Kentucky, between May and September, participation in SNAP dropped by anywhere between 4.7 percent in Owsley County to 46.9 percent in Marion County (measured as a share of those for whom a time limit applied). Only eight counties in southeastern Kentucky remain exempt from the time limit, and only because they are part of a SNAP Employment and Training pilot program that does not allow for the time limit while the program is being run.

Many subject to the work requirement are employed in low-wage industries offering unsteady hours, and many live in communities with a lack of employment options. Enforcing a requirement to work a certain number of hours per week or else lose food assistance is deeply problematic, especially in parts of the state that have not fully recovered from the Great Recession, or have a long history of economic hardship. The U.S. Department of Labor refers to these areas as Labor Surplus Areas, and the federal government makes it easier for states to waive the SNAP time limit for such counties.

There are 55 Labor Surplus Areas in Kentucky (indicated in the map above), and the number of such areas increased this year even while the state was installing the time limits. For some of those areas, this year was the first time the time limit barriers were in effect in the history of the food assistance program.

Past research shows denying vital food and other assistance doesn’t improve work outcomes, and certainly does nothing to create good job opportunities accessible to those who need them. But such barriers do make it harder for people to meet their essential needs.