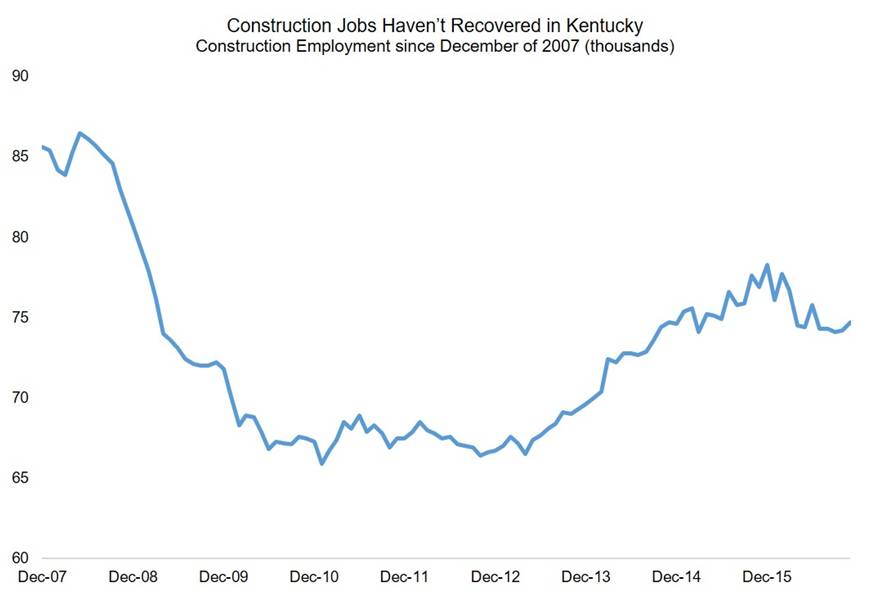 Good-paying jobs like those in construction are the foundation of a healthy middle class and growing economy, and a skilled construction workforce builds the high-quality physical infrastructure necessary for  growth. According to a new research report, Kentucky’s prevailing wage law strengthens this important industry, and its repeal would have negative repercussions for job quality, workforce development and local economies in the Commonwealth.

Kentucky’s prevailing wage law requires construction workers on state and local public projects costing more than $250,000 to be compensated, in terms of both pay and benefits, according to local industry standards measured by the state Labor Cabinet or the U.S. Department of Labor. The law therefore puts a floor on how low a contractor can bid labor on schools, highways and other public jobs, and also helps maintain wage standards for the entire industry in Kentucky.

A repeal or significant weakening of Kentucky’s prevailing wage law (for instance, exempting schools) would lower wages and benefits for workers and increase poverty and reliance on public assistance. The study’s authors estimate:

Because people who have previously served in the military are more likely to work in construction than non-veterans, a repeal would disproportionately impact this group, draining an estimated $80 million in total wages and salaries from veterans in Kentucky.

Work would also become more dangerous for construction workers under a repeal of prevailing wages. That’s because the law creates an incentive for contractors to train workers in formal apprenticeships. More training leads to less accidents, preventing both injuries and fatalities. Research shows states without strong prevailing wage laws have higher injury and fatality rates.

And when construction workers lose employment due to out-of-state competition, local economies suffer too. That’s because workers spend their paychecks patronizing local businesses, buying groceries and improving the value of their homes, for instance, creating an economic multiplier effect. Kentucky would lose an additional 1,100 jobs in other industries due to the loss of construction worker spending, according to the report, and an associated $12.5 million in state and local tax revenue. These figures do not include the additional economic consequences of a repeal caused by erosion in construction wage standards.

Repeal Not Associated with Savings for State and Local Governments

Despite lowering wages for construction workers, a prevailing wage repeal is unlikely to save governments and school boards money. The report notes that 13 out of 17 (76 percent) peer-reviewed studies since 2000 suggest prevailing wages are not associated with higher public construction costs. The research shows increased wages are offset by other factors such as higher productivity due to a more skilled workforce. Because labor is a small and decreasing share of total construction costs (23 percent, nationally), small increases in productivity or decreases in other costs offset higher wages. In states with prevailing wage laws, contractors spend less on materials, fuel, and equipment, take home smaller profits, and find other efficiencies to remain competitive while still paying good wages.

A summary of the report is available here.