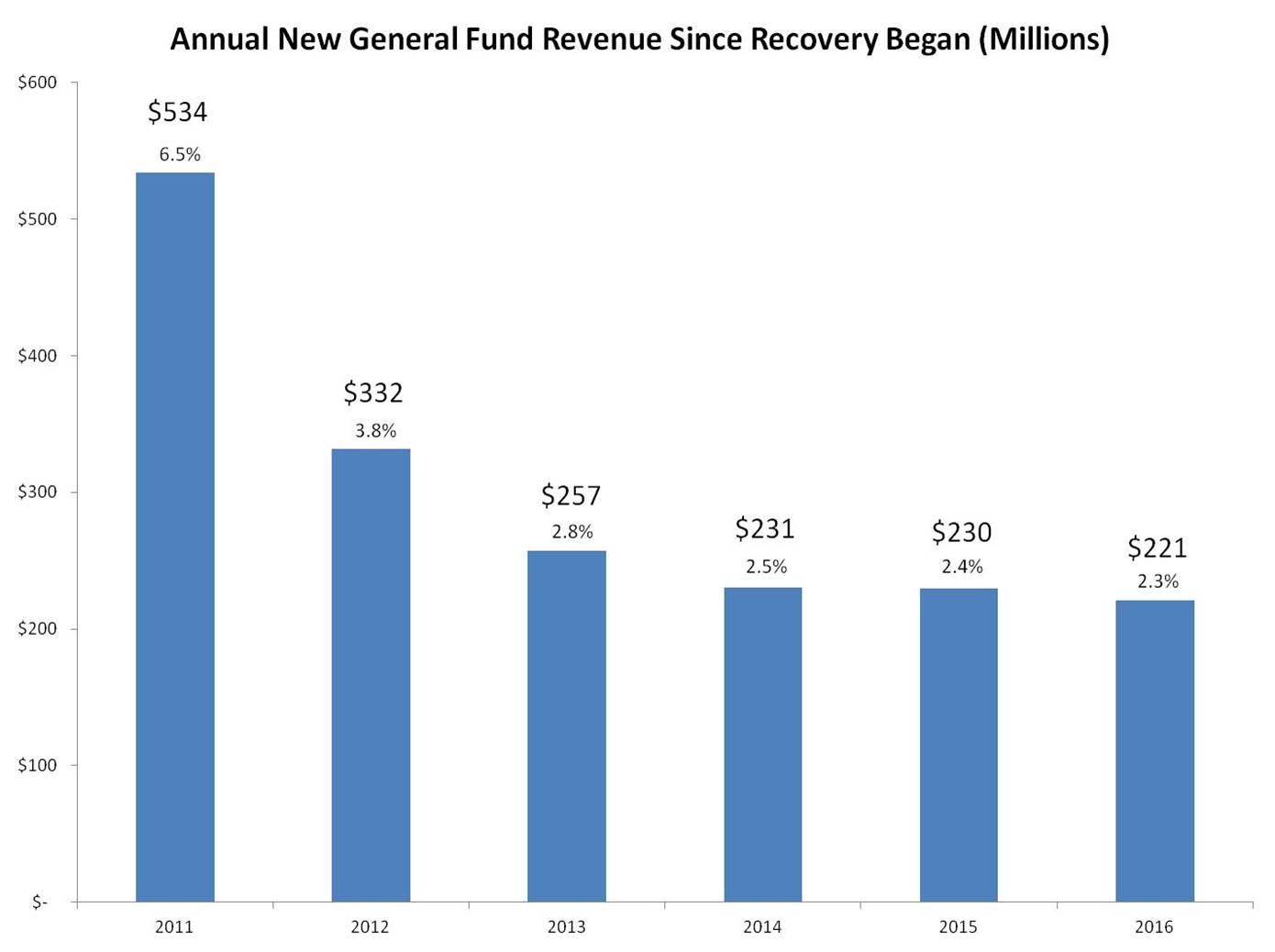 Kentucky currently expects to craft its next two-year budget with the least amount of new General Fund revenue it has had since the recovery began. This bad news comes despite passing a revenue bill in the 2013 session intended to allow Kentucky to pay its full annual obligation to the pension system while protecting other parts of the budget.

The October estimates of the state’s Consensus Forecasting Group (CFG) project growth of $230 million in 2015 (the first year of the budget) and $221 million in 2016, increases of 2.4 percent and 2.3 percent respectively. Growth was stronger in each of the four prior years of the recovery (see graph below). The CFG will decide on a final forecast for the new budget by January.

The individual income tax–by far the state’s strongest revenue source–is also expecting somewhat slower growth over the next two years than it had at the beginning of the recovery. Higher growth is typical in early periods of recovery, when income taxes tend to rise more rapidly than other sources like sales taxes. It’s particularly true in this recovery, where the incomes of wealthy individuals have grown dramatically while the wages and spending of low- and middle-income people have stagnated.

The weakness of the economy overall contributes to the state’s revenue problem. At current rates of job growth, Kentucky would not get back to pre-recession unemployment rates until the last half of the decade. Kentucky’s revenue is heavily dependent on growth in income from wages and salaries, which is hampered by too few jobs and sagging wages.

And as has been well-documented, Kentucky’s tax system doesn’t keep up with growth in the economy because it has too many exemptions and exclusions in its major tax sources. Sales tax revenue, for example, is projected to grow at rates of only 1. 3 percent and 2.2 percent over the next two years (compared to growth of more than 5 percent a year throughout the 1990s), and failing to extend the sales tax to services plays a role in this slow growth.

As part of the deal over legislation that made changes to Kentucky’s pension system in the 2013 regular session, the General Assembly passed a revenue bill that proponents said would allow Kentucky to begin making full annual contributions to pay down its pension liability. However, the new revenue from the bill was small to begin with, and is easily overwhelmed by other forces depressing state revenue growth.

The law, House Bill 440, was projected to raise $65.7 million in new General Fund money the first year of the new budget and $69.9 million the second. Its major provisions were a cut in the small personal credit for individual income taxes, an end to a corporate loophole that allowed large multi-state corporations to reduce tax liability by deducting fees paid between subsidiaries, and a reduction in the compensation vendors can claim from remitting sales taxes. Also, the state said at the time it expected to gain $30 million a year in additional revenue because of federal tax law changes associated with the “fiscal cliff” deal Congress made in January 2013.

Other revenue trends like the continued decline in coal severance and cigarette tax receipts negate the impact of House Bill 440 in the latest revenue forecast. And the state does not have the benefit of the tax amnesty program in the next budget, which provided $58.4 million in one-time tax revenue in 2013.

A Terrible Budget without More Revenues

The only good news is that the preliminary forecast projects revenues for this year will be $59.5 million more than originally expected, which could mean a small boost going into the new budget. However, the next budget must replace $157 million in one-time monies used to balance the current budget (including $49 million taken out of the rainy day fund), and make $128-$148 million in additional state employee pension payments per year (not to mention the amount owed to teachers’ pensions) before it can begin to address other budget needs.

Come January, the conversation in Frankfort will be about a budget with unprecedented austerity unless additional revenues are considered.