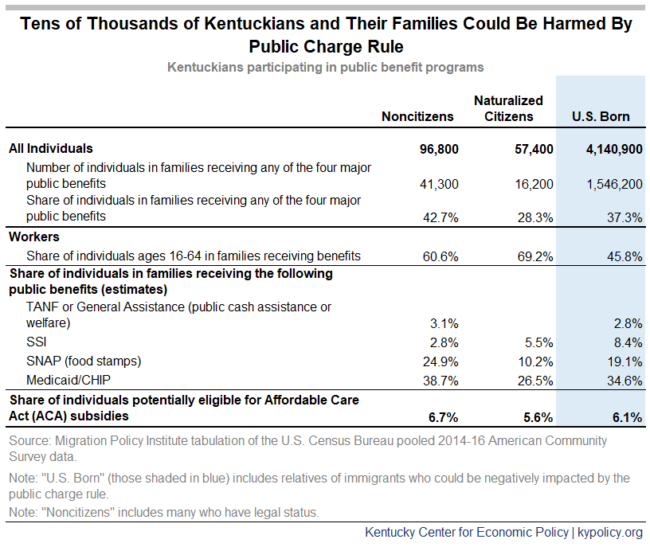 The President’s administration is planning a radical change in immigration policy that would keep many individuals and families from participating in a wide range of public programs for which they are legally eligible. Such a change would have very harmful effects on immigrant families in Kentucky and across the country, including children who are American citizens.

When a person requests to enter the U.S., or when immigrants already in the country apply to have their status changed (such as those seeking Lawful Permanent Resident status) or extended, federal authorities take certain factors into consideration to determine whether they are a “public charge,” a status that often results in a denial of immigration requests. The longstanding federal policy has been to deem a person a public charge if more than half of their income is from cash assistance (such as Temporary Assistance for Needy Families (TANF) and Supplemental Security Income (SSI)) or long-term institutional care funded by the government. The draft of proposed changes to this determination would lead to many more people – specifically, immigrants with legal status, as undocumented immigrants are already ineligible for nearly all of these programs – being classified as public charges. The changes would:

The two main effects of the proposed rule would be to prevent some immigrants who are in the U.S. lawfully — who receive or whose close family members receive any of these benefits — from becoming residents and to prevent prospective immigrants who want to reunite with their families from entering the U.S.; and to create new barriers to economic security and well-being. In order to protect their families from having immigration requests denied, a large number of immigrants in the U.S. lawfully and their children — many of whom are U.S. citizens — would be likely to forgo benefits or tax credits for which they’re legally eligible. Given that such rules and the determination process are so technical, the number of low-income immigrant families that would choose not to receive benefits would be considerably larger than the number that would actually be subject to a public charge determination.

The latter impact is often called a “chilling effect”— and it has happened before, such as in the late 1990s at a time when widespread confusion and fear about public charge rules led to fewer people utilizing programs for which they were eligible. Some immigrants, in response to the current proposed changes, are already starting to abandon public nutrition services out of fear of what is to come.

The Center for American Progress has pointed out that these changes would essentially restrict immigration to the wealthiest and most privileged applicants as people would generally fail the public charge test if they had income and resources of less than 250 percent of the federal poverty guidelines or a medical condition and no unsubsidized source of health insurance. In fact, it is estimated that the new criteria is so restrictive that more than 100 million people would fail if they had to take it today, including many working Americans who would be treated as public charges.

The inclusion of the EITC is particularly problematic. This tax credit is designed to offset federal payroll and excise taxes that disproportionately impact people who work low-wage jobs. The draft rule would put immigrants working lawfully for low pay at serious risk if they receive the EITC for which they are eligible. The Center on Budget and Policy Priorities has noted that as a result, the proposed rule “would effectively tax those immigrants — and their families, including citizen spouses and children — more harshly than other workers and their families.” Without the EITC or Child Tax Credit, children will be less likely to do well in school, finish high school and go on to college (as indicated by research). At the same time, the rule does not apply to tax subsidies that benefit the wealthy and corporations, which affluent immigrants may receive.

The proposed changes would prove particularly harsh for pregnant women and children. Immigrants might forgo health coverage or nutrition assistance for themselves or for infants, preschoolers and school-age children for instance. Pregnant women may decline to enroll in Medicaid and WIC, resulting in little to no prenatal care and poor nutrition. Some are already making these difficult choices now out of fear the proposed changes will go into effect in the near future.

The rule would also have negative economic impacts. The EITC, SNAP and other benefits circulate resources in our local economies and have important positive effects on children and their ability to contribute to the economy as adults. And a likely significant increase in people who lack health insurance — and therefore who come to emergency rooms for their medical care — could harm the financial health and viability of some hospitals.

As we’ve noted before, new Americans in Kentucky — of which more than one in three are naturalized citizens and the rest are legal residents and undocumented immigrants — make important economic contributions to our state. They are well-represented across our workforce, particularly among small business owners. Their children, often born in Kentucky and citizens of the U.S., go to school across the commonwealth and grow up to make important economic contributions. And whether native-born or foreign-born, when we remove barriers to Kentuckians’ economic security, our communities and local economies are better off.

Yet tens of thousands of Kentuckians – U.S. born, naturalized and non-citizens – could be impacted by the proposed public charge rule change. The table below shows the number of Kentuckians who could be impacted by the change as a result of participating in or being related to others who participate in public programs. A couple of things stand out: While just 3.1 percent of noncitizen Kentuckians receive cash assistance , 42.7 percent participate in at least 1 of the 4 main public benefits programs; and 60.6 percent of noncitizen Kentuckians ages 16 to 64 receiving benefits are workers.