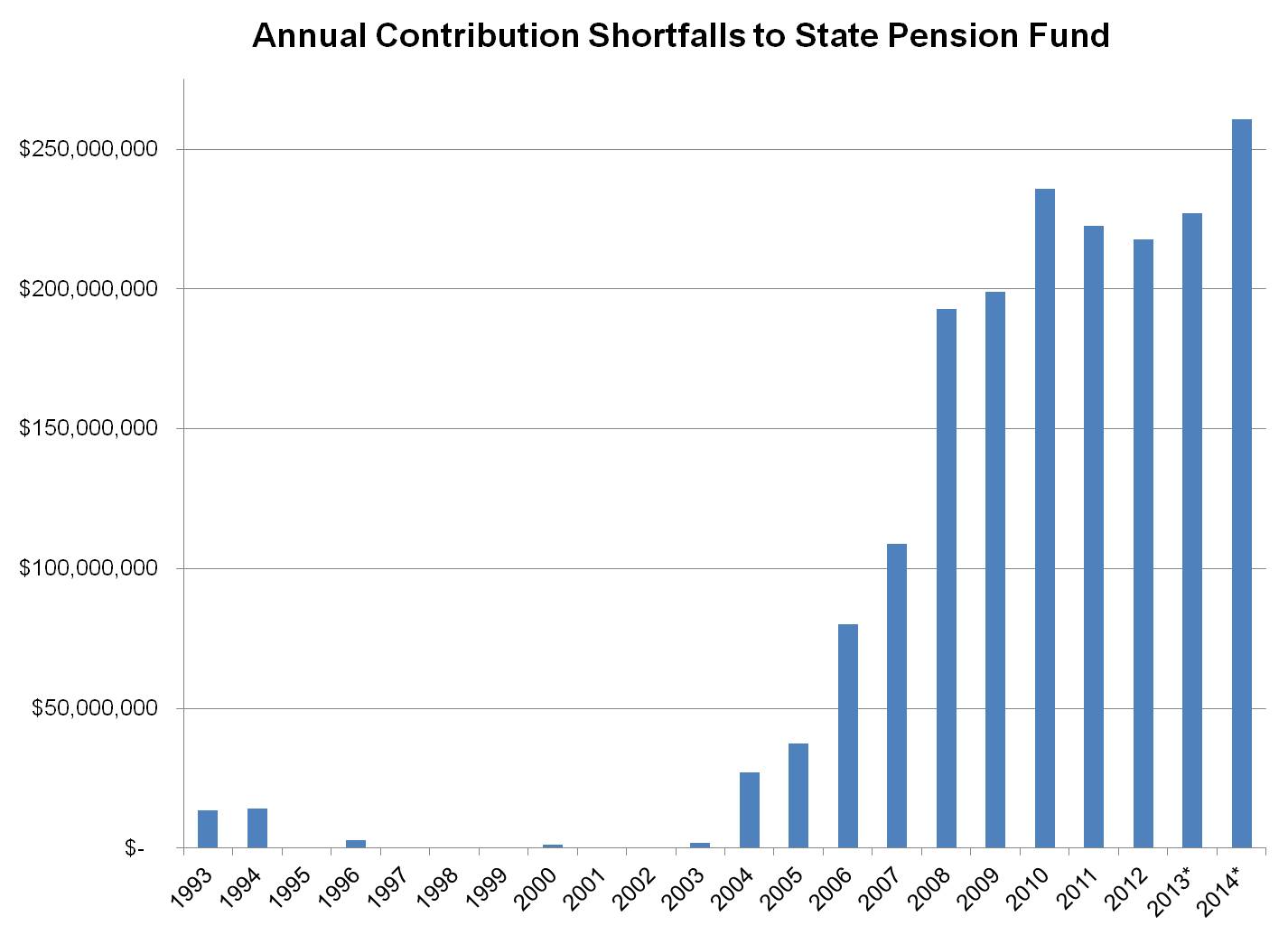 A major contributor to Kentucky’s pension funding problem is the legislature’s failure to make the full required contribution to the retirement system in recent years.

Shortfalls in payments started as early as 1993, but began in earnest in 2004. As the first figure below shows, the state has shortchanged the pension system by at least $100 million a year since 2007.

Added up, the shortfalls total $1.8 billion, as shown in the next figure. And that’s not including the shortfalls in funding for retiree health benefits, which also amount to billions of dollars.

Since the contributions were not in the system to earn investment returns, the full impact of underfunding is even worse. Taking those lost returns into account brings the total shortfall for the pension fund alone up to an estimated $2.4 billion by the end of 2014.

How big a number is $2.4 billion? At the end of 2012, the Kentucky Employees Retirement System pension fund had $3.8 billion in assets. So without the shortfalls the system would have around 63 percent more assets.

Failing to pay the full required contribution is one of two ways the state has underfunded promised benefits. The second way is by not paying for cost-of-living adjustments and changes to benefits. These items should have been pre-funded, but instead were added to the long-term liability. Some of the benefit changes were made to encourage experienced employees to retire in order to save money in the already-lean budget—but the changes just shifted new costs over to the retirement system.

Poor investment returns resulting from two recessions in the 2000s also worsened the problem, but Kentucky’s pension system wouldn’t be a subject of such scrutiny if it were for investment results alone. Kentucky’s losses were on par with other states, but most of those states will return to adequate funding levels in the next few years because they did not underfund promised benefits.

Failing to make adequate and timely payments to the retirement system has set Kentucky back. Funding the benefits that are promised is the essential element of any viable solution to Kentucky’s pension challenge. Without more money to make the full required contribution—and without attaching resources to any cost-of-living adjustments in the future—Kentucky’s problem will only continue to accumulate.

We must talk about revenue, because without it there just won’t be enough money in the budget (see here and here) to make the full annual payment while also doing justice to Kentucky’s other needs.

*Funding shortfalls for 2013 and 2014 are estimates using the budgeted contributions for those years, the system’s assumed investment rate of return of 7.75 percent and the same covered payroll as 2012. Actual rate of return for the 2013 fiscal year through the end of January is 9.51 percent: https://kyret.ky.gov/images/uploads/news/January_2013_Performance_Update.pdf