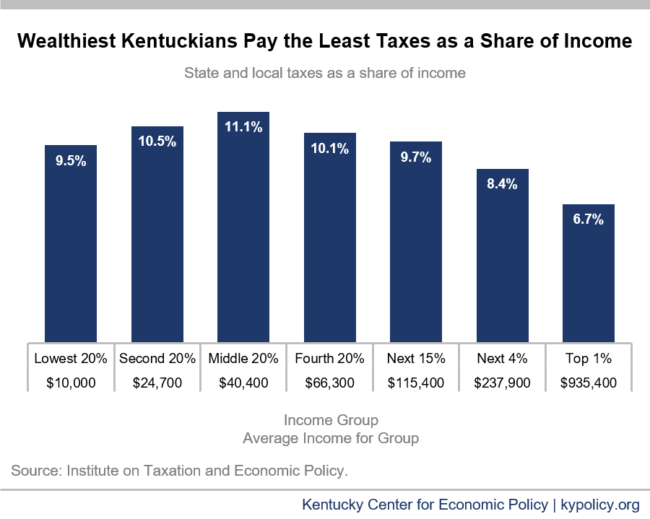 The study, Who Pays? A Distributional Analysis of the Tax Systems in All 50 States, evaluates the major components of state and local tax systems – including personal and corporate income taxes, property taxes, sales taxes and other excise taxes – for their overall distributional impact across income groups. For example, Kentucky’s low income tax credit means that people in poverty do not pay state income taxes. However, because the state fails to provide refundable tax credits to offset sales, excise and property taxes paid by low-income people, and because the state has a flat as opposed to graduated income tax rate structure, the poorest 20 percent of Kentuckians pay an effective tax rate 1.42 times higher than that paid by the top 1 percent.

“The wealthiest Kentuckians benefit the most from our growing economy, and by a widening margin,” Kentucky Center for Economic Policy Senior Policy Analyst Anna Baumann said. “It would be reasonable for them to pay a little more in taxes, according to their ability, for the investments that benefit us all. But instead, we have been cutting their taxes, cutting investments in our schools and community based services, and leaning more heavily on middle- and low-income Kentuckians.”

As a result of asking more of low-income Americans and less of the wealthy as a share of income, almost all states’ tax systems, including Kentucky’s, exacerbate income inequality. Before state and local taxes, the wealthiest 1 percent of Kentuckians make 94 times more in income on average than the bottom 20 percent, but after taxes, they make 96 times more. Because poverty and wealth are concentrated in certain regions of Kentucky, and because long-term systemic barriers to education, housing, jobs and more prevent Kentuckians of color from economic advancement, our tax system also widens geographic and racial income divides.

Tax changes passed by the 2018 General Assembly – overall, a shift in reliance from progressive income taxes to regressive sales taxes – made Kentucky’s tax system even more upside-down than it already was. Because of these changes, Kentucky now ranks 25th worst among states on ITEP’s inequality index which measures the effect of state tax systems on income inequality. Without those changes, Kentucky would have ranked 34th. 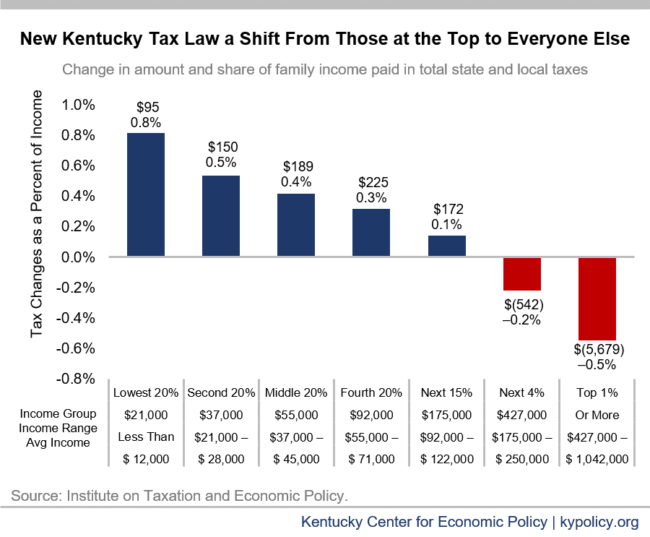 “To ensure the wealthy chip in, state lawmakers should restore a graduated income tax, clean up corporate tax breaks and reinstate the estate tax. Unfortunately, some political leaders have indicated they would like to see Kentucky’s income taxes cut further and an even greater reliance on sales taxes,” said Baumann. “But that would mean additional tax cuts for the wealthy, a shift in paying taxes over to everyday Kentuckians, and less reliable revenue growth for our investments over time.”

“Rising income inequality is unconscionable, and it is certainly a problem that local, state and federal lawmakers should address,” deputy director of ITEP and an author of the study Meg Wiehe said. “Regressive state tax systems didn’t cause the growing income divide, but they certainly exacerbate the problem. State lawmakers have control over how their tax systems are structured. They can and should enact more equitable tax policies that raise adequate revenue in a fair, sustainable way.”