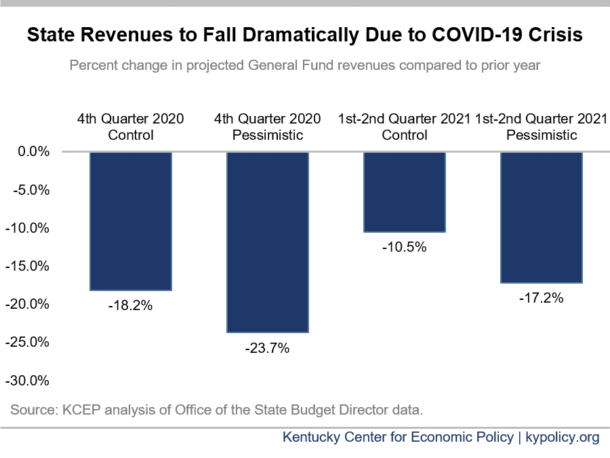 Kentucky’s General Fund tax revenues will crater in the coming months due to the COVID-19 downturn, according to a new unofficial forecast released today by the Office of the State Budget Director (OSBD). The forecast offers both a “control” and “pessimistic” scenario, and estimates that General Fund revenues in the fourth quarter of the current fiscal year will be 18.2% to 23.7% less than the same period last year. For the first two quarters of the next fiscal year, revenues are expected to fall between 10.5% and 17.2%.

The numbers suggest a shortfall in the current fiscal year, which ends on June 30, 2020, of between $319 and $495 million, and another major shortfall in 2021 that could easily exceed $1 billion.

To provide some context, the anticipated shortfall for the current fiscal year will likely be more than the total General Fund appropriations for this year for made for commonwealth’s attorneys, county attorneys, public defenders, the offices of the Attorney General, the Secretary of State, the State Auditor, the Department of Agriculture, Family and Youth Resources Centers, Property Valuation Administrators, the Department of Juvenile Justice, and Environmental Protection added together. Kentucky’s schools, colleges, public health departments, social services and more are already hurting from more than a decade of cuts set in motion by the Great Recession and additional cuts of the magnitude suggested by the forecast would be devastating.

The OSBD also projects that Kentucky’s Road Fund revenues will crater, resulting in a projected shortfall of between $116.4 to $194.6 million in the current fiscal year – an amount that is 7.5% to 12.5% less than the official estimate. The shortfall in the current quarter is predicted to be between 36.8% and 55.2% less than the same period last year, leveling out to reductions of between 5% and 7% for the first two quarters of the 2021 fiscal year. It should be noted that there are some timing issues with receipt of fees for renewal of various licenses and permits as renewal dates were extended by 90 days, which will move some revenue normally received in 2020 to 2021. The significant reduction in motor fuels tax revenues will also harm counties and cities, as the revenue sharing program that provides support to local governments is based on motor fuels tax receipts. Kentucky came into the most recent budget session with over a $1 billion maintenance backlogs in the state highway plan along with many other needs. The pandemic will set even further back the state’s ability to repair and update roads and bridges.

Some federal relief has been provided, but significantly more is needed

Given the projected magnitude of Kentucky’s revenue shortfalls and significant increase in costs related to the crisis, the limited and targeted federal assistance provided thus far is inadequate. Much more is needed to prevent significant and painful cuts to critical government services and programs and to avoid lengthening and deepening the economic downturn. Unlike the assistance provided during the Great Recession, which was not scaled to the depth of the crisis and ended too early, federal assistance to help address the impacts of COVID-19 should be robust, and should continue until there is a full recovery.