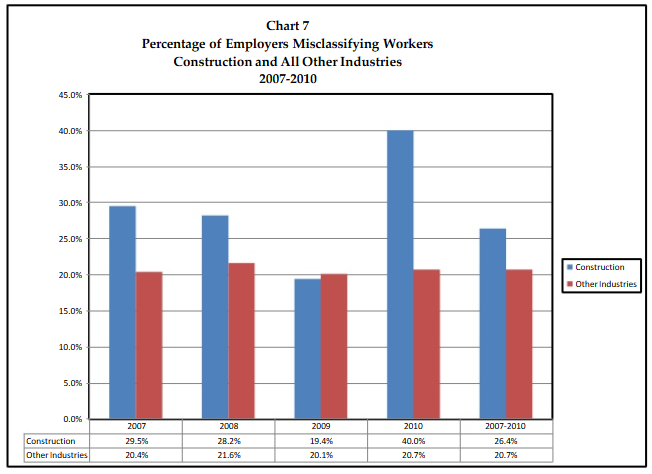 House Bill 256 would help Kentucky workers as well as the state’s budget by cracking down on the growing problem of misclassification of workers as independent contractors, with a focus on Kentucky’s construction industry.

A recent survey of research indicates that 10 to 30 percent of employers—possibly more—misclassify their employees as independent contractors. Some employment sectors are more likely than others to misclassify—for instance, the construction industry has a high rate of misclassification. According to a 2011 study of Kentucky’s unemployment insurance audits for 2007-2010, on average 26.4 percent of construction employers misclassified workers as independent contractors.

Source: Michael Kelsay and James Sturgeon, “The Economic Costs of Employee Misclassification in the Construction Sector in the Commonwealth of Kentucky,” September 14, 2011.

Being misclassified as an independent contractor is harmful to Kentucky’s workers who lose protections designed to help employees—including minimum wage provisions, overtime pay, worker health and safety laws, medical and family leave requirements, workers’ compensation insurance for injuries suffered on the job and unemployment benefits if laid off. Independent contractors also pay more in taxes as they are required to pay both the employee and employer share of Medicare and Social Security taxes—double what regular employees pay.

The misclassification of workers is also harmful to the state. According to the 2011 study of Kentucky’s construction sector the total revenue loss from that industry alone was approximately $11.28 million a year:

The total amount of state revenue lost from worker misclassification across all industries is potentially much larger. A study of Indiana put the annual income tax revenue loss at $147.5 million, and an Ohio study estimated a range from $21 million to $248 million.

In addition, the misclassification of workers damages the fairness and legitimacy of the bidding process by putting employers who play by the rules at a competitive disadvantage. Those who misclassify employees as independent contractors can reduce their payroll costs by approximately 30 percent.

House Bill 256 would address the problem of the misclassification of workers in the construction industry in Kentucky by:

House Bill 256’s proposed efforts to decrease misclassification would make life better for Kentucky’s construction workers, level the playing field for employers who treat their workers fairly and generate revenue to help with the state’s many needs.