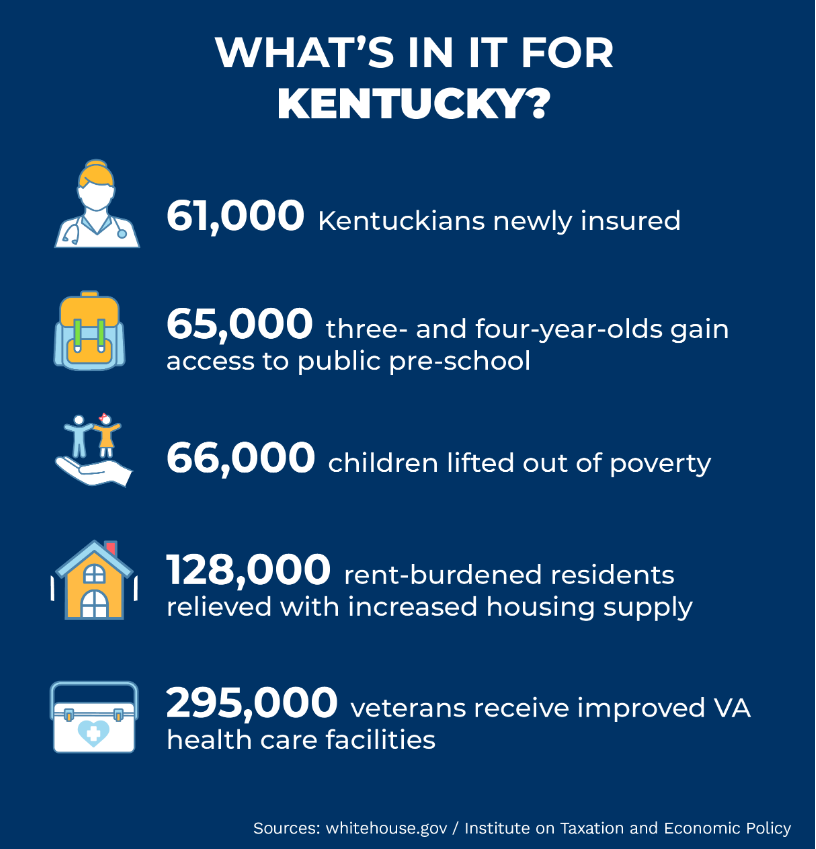 Kentucky has an opportunity to tackle its infrastructure challenges head on through proposed investments in President Biden’s American Jobs Plan and American Families Plan. From the lack of clean water and reliable bridges to high-speed internet and high-quality childcare, these challenges hold back our communities and our economy. The Families and Jobs Plans would provide the resources necessary to unleash our potential.

The need to invest in the physical and human needs of Kentucky is urgent. Kentucky’s infrastructure, including its bridges, dams, drinking water, roads and wastewater, has received a C- grade from the American Society of Civil Engineers, and 12% of Kentuckians live in a “broadband desert” without reliable internet access. Half of Kentuckians live in areas with insufficient childcare resources, and more than one in five children live in poverty.

The Jobs and Families Plans would also provide funding to improve health care facilities for 295,000 veterans in Kentucky, expand health insurance to 61,000 Kentuckians who lack coverage, lift 66,000 children out of poverty with expanded Child Tax Credits, and provide pre-school for 65,000 three- and four-year-olds, among numerous other investments.

To offset the costs, the plans would claw back several tax breaks passed in 2017 that created windfalls for profitable corporations and people who make more than $400,000 per year. These provisions include restoring the corporate tax rate to 28%, still lower than the 35% rate in effect before the 2017 tax law slashed it; and returning the top personal income tax rate on “ordinary” income to 39.6%, where it stood before being reduced to 37% under the 2017 tax law.

The plans would also curtail an older and very expensive tax break for wealthy investors: the 20% top tax rate on capital gains (profits from selling assets) and stock dividends, which is much lower than the tax rates for “ordinary” income like wages. This tax break has long allowed people who live off their wealth to pay lower tax rates than people who work for a living. The proposal would repeal this break for millionaires. Any taxable income beyond $1 million would be taxed at the same rate of 39.6%, regardless of whether it is capital gains or dividends or ordinary income.

A recent study from the Institute on Taxation and Economic Policy (ITEP) found that only around 5,300 tax filers, about 0.2% of all Kentucky filers, would be affected by the proposed rate increase on capital gains and dividends next year. Rapidly-accumulating wealth at the top from allowing this loophole isn’t doing Kentuckians any good as it adds to offshore bank accounts, funds extravagant luxuries and creates new dynasties in one of the poorest states in America.

Taxing millionaires’ income from wealth just like we tax everyone else’s income from work would pay for investments that benefit our entire commonwealth – from young children and aging veterans to business owners and working families – and pave the way for shared economic prosperity.

These revenue proposals, including the change for capital gains and dividends, are commonsense reforms that would make our tax code fairer and would help create the conditions for all Kentuckians, not merely a small population of millionaires, to thrive.

Pam Thomas is Senior Fellow at the Kentucky Center for Economic Policy.