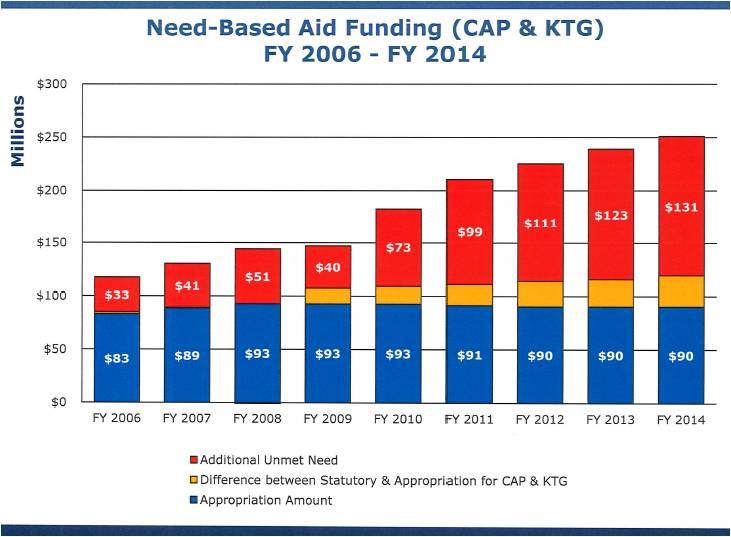 The House has recently identified new lottery funds as a potential source of revenue to help pay down Kentucky’s pension liability. Whatever happens with that proposal, it’s important to understand that the student financial aid programs that currently receive almost all of the lottery revenue are already substantially underfunded.

Capping the monies for college scholarships, even while allowing up to 2 percent annual growth as proposed by the House, would mean that our neediest students would continue to be turned away for financial aid. More dollars are needed both to pay back the pension debt to workers and to help more Kentuckians afford college.

According to a recent Kentucky Higher Education Assistance Authority (KHEAA) presentation, current lottery revenues do not come close to funding all of the students eligible for the state’s financial aid programs. It’s true that the merit-based Kentucky Educational Excellence Scholarship (KEES) is fully funded meaning all eligible students receive scholarships—although the individual scholarship base amounts have been frozen since KEES was established in 1998. But the critically important need-based programs—the College Access Program (CAP) and the Kentucky Tuition Grant (KTG)—turn away more and more students each year due to a lack of funds.1

CAP and KTG funds are distributed on a first come, first served basis, and the number of students denied assistance more than doubled between 2008 and 2011—increasing from close to 40,000 students in 2008 to more than 80,000 in 2011. Each year the date that CAP funding is exhausted is earlier than the previous year. While in 2011 it was in early March for CAP, in 2012 the cut-off date was mid-February.2

As illustrated in the chart below, since 2011 more eligible students are denied need-based aid than receive it. In 2012 the state appropriated $90 million for CAP and KTG, leaving more than $111 million in unmet need for these programs.

These state scholarship programs—especially for need-based aid—have never been more important than they are now. Tuition at Kentucky’s public colleges and universities has skyrocketed—increasing more than 200 percent since 1998. Even tuition at the state’s community colleges is unaffordable for many. Meanwhile, Kentucky has set an ambitious goal for increasing the share of adults with college degrees from the current rate of 32 percent to 43 percent by 2020.3

In order to adequately fund the state’s scholarship programs and its pension system—not to mention its many other important underfunded programs and services—Kentucky needs much more revenue than an expanded lottery and other gambling can provide. When it comes to the state’s staggering revenue needs, a lottery strategy is no replacement for tax reform.