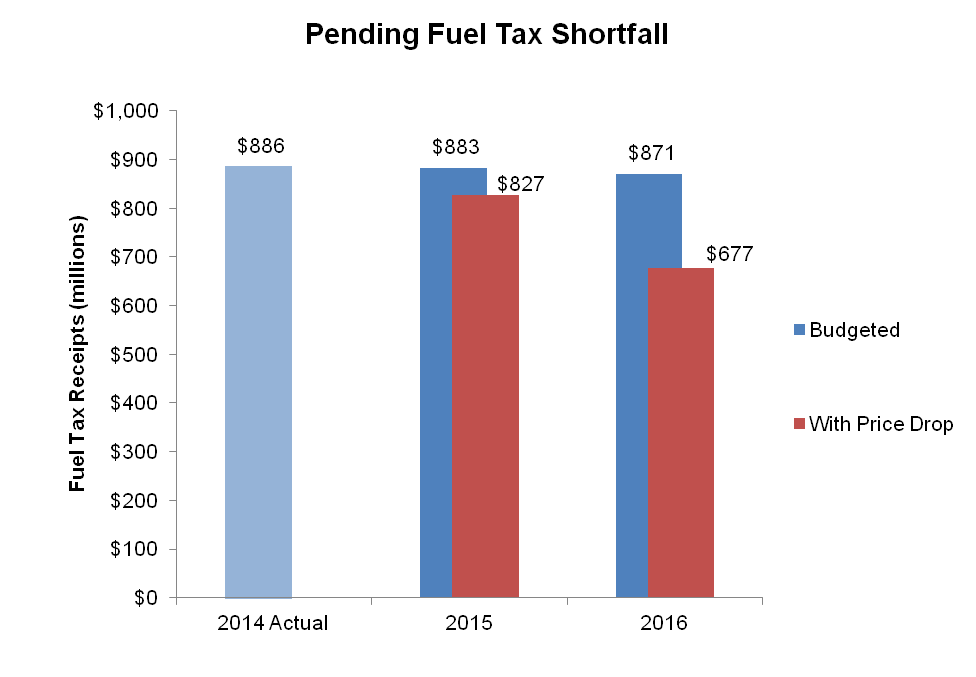 With just two days left in the 2015 General Assembly, legislators are running out of time to protect the Road Fund from another decrease in the motor fuels tax. On April 1, Kentucky’s gas tax is scheduled to drop from its current rate of 21.2 cents to its statutory floor of 16.1 cents, leaving the state, and especially county, rural and municipal governments, with less revenue to maintain, build and improve Kentucky’s roads and bridges.

Because the gas tax is Kentucky’s primary source of Road Fund revenue, accounting for more than half of total state collections, the estimated gas tax shortfall is a big share of the Road Fund itself — 4 percent in budget year 2015 and 12 percent in budget year 2016. The harm is even more acute at the local level, where state aid to local governments will receive the full brunt of the gas tax reduction. Nearly half of state gas tax revenue goes back to road aid funds for Kentucky’s cities (7.7 percent, $62 million in 2014 ), counties (18.3 percent, $148 million) and rural areas (22.2 percent, $179 million).

Gas taxes pay for the construction and maintenance of the roads and bridges that get Kentuckians to work and school each day, transport materials used in production and convey goods to consumers. The pending shortfall will undermine these functions by lengthening an existing backlog of needed repairs. According to a report card from the American Society of Civil Engineers, Kentucky’s infrastructure needs are extensive: 7 percent of major roads are considered to be in poor condition and 1,234 bridges are considered structurally deficient. ASCE estimates vehicle repair costs and operating expenses associated with driving on roads in poor repair cost Kentucky motorists $940 million each year — $315 per motorist. Two straight bad winters have also added to potholes and other repair needs.

Good roads also support Kentucky jobs both directly and indirectly: in 2010, roughly 43,000 full-time jobs were supported by the transportation construction industry, with $1.7 billion in payroll to workers. An additional 1.1 million jobs came out of industries highly dependent on the state’s transportation network such as tourism, retail sales, agriculture and manufacturing. Kentucky’s economy especially depends on roads: manufacturing makes up 18 percent of state GDP compared to 12 percent nationally, while transportation and warehousing make up 5 percent compared to 3 percent for the U. S. as a whole.

Problems with the gas tax are old and compounding

At 9 percent of the average wholesale price of gasoline (AWP), Kentucky’s gas tax is vulnerable to economic trends outside the control of lawmakers. To somewhat lessen the impact of changes in the AWP, Kentucky law sets a floor below which the gas tax cannot fall — $1.786, the price that will go into effect on April 1. But the floor has not been lifted in six years and is too low to allow needed investments in infrastructure, especially given Congress’s unwillingness to act to raise the federal gas tax. Furthermore, while the 5.1 cent drop from 21.2 to 16.1 cents amounts to a 24 percent loss in just one quarter, growth in the gas tax rate, once prices finally go back up, is capped at 10 percent per year.

A year ago during the 2014 General Assembly, Governor Beshear recommended and the House passed a bill that would have frozen the gas tax at 25.9 cents, its rate at the end of 2013. However, the session ended without any action on the gas tax. Comparing what would have happened if the floor had been lifted last year to what will happen if the tax falls to its current floor — even if it begins to increase by the maximum 10 percent each year starting in budget year 2017 — illustrates the cost of inaction: by the time the gas tax climbs back to 25.9 cents in budget year 2021, the state will have lost more than $1 billion in revenue for roads.

Two bills in the 2015 General Assembly propose to stop the full decline, HB 513 and SB 29. The graph below compares those proposals to what will happen if legislators don’t act, the forecasted rate around which the current budget was built, and the rate we would have had if the Senate had passed the House-passed increase last year. 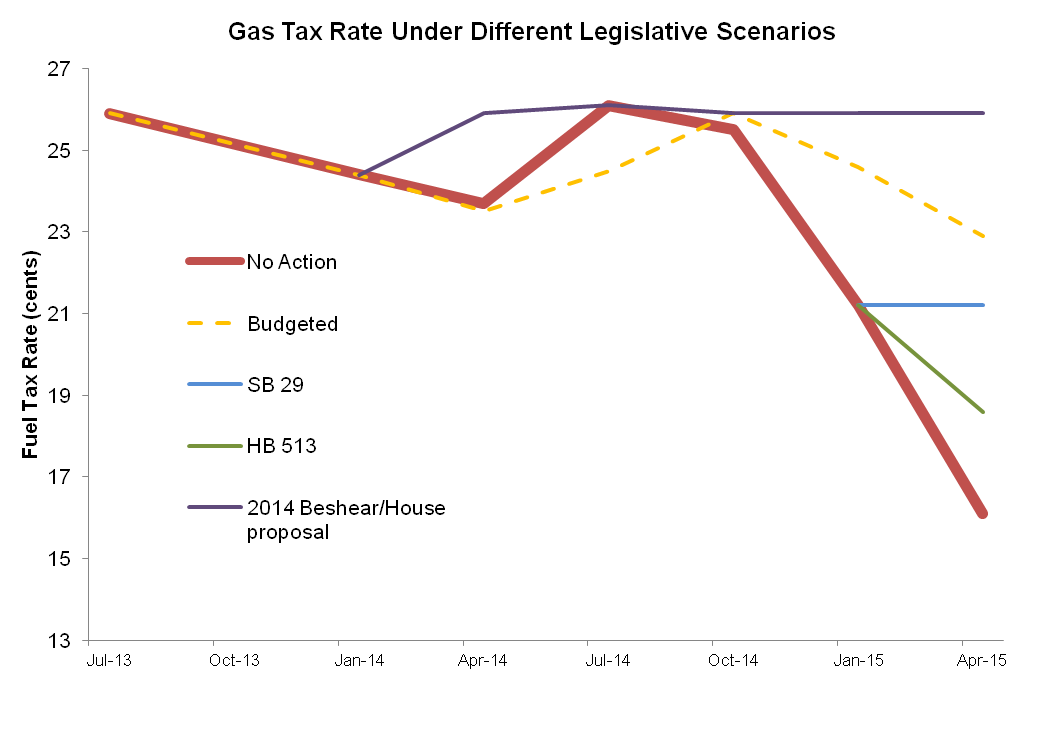 Note: Gas tax rates shown include only the variable portion based on the AWP. They do not include the 5 cent supplemental user fee or 1.4 cent underground storage tank cleanup fee.