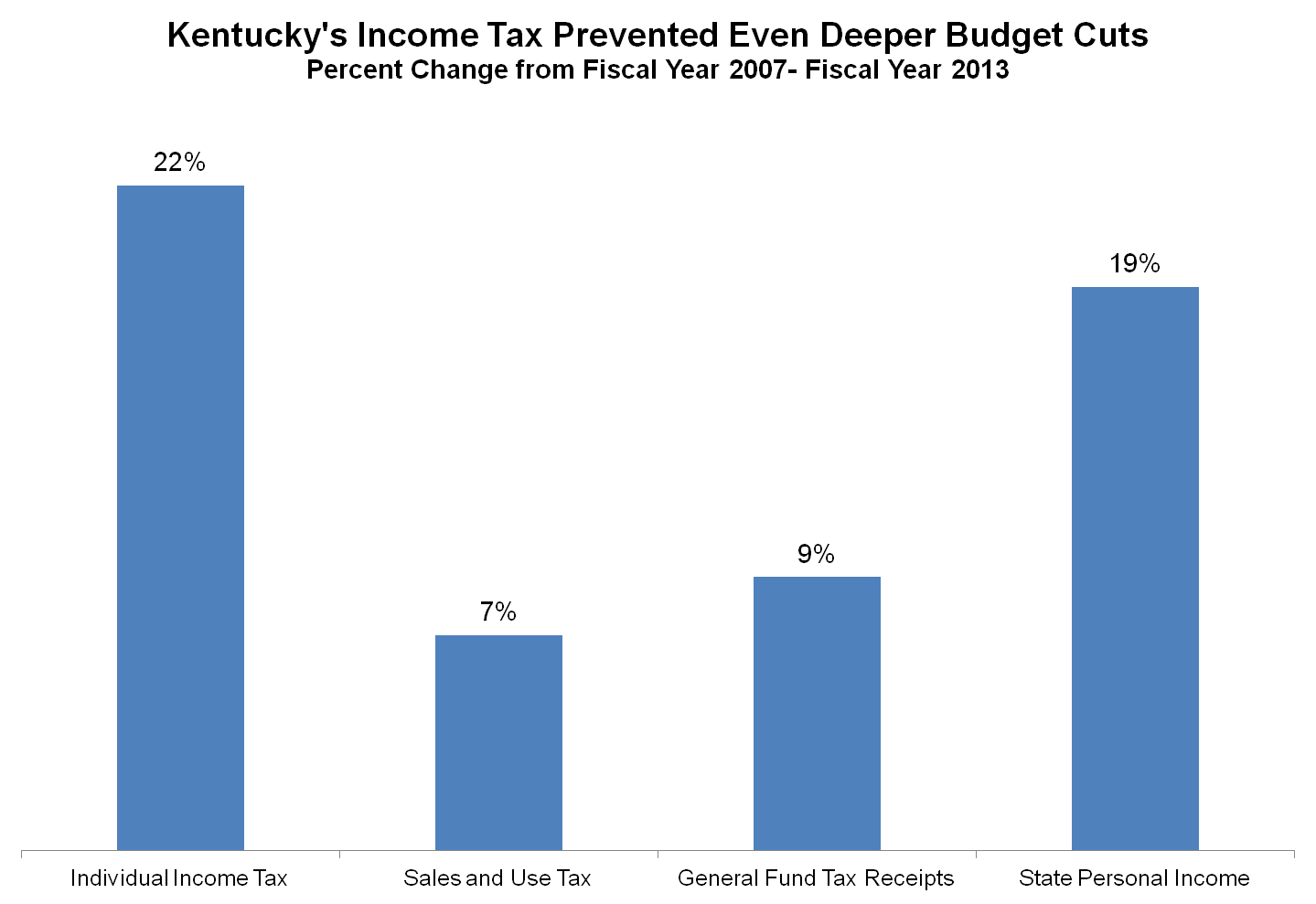 The recession and weak recovery combined with an inadequate state tax system have led to $1.6 billion in state budget cuts over the last few years. But the situation would’ve been much worse if it weren’t for Kentucky’s individual income tax and the essential role it plays in fairly generating needed revenue.

As the graph below shows, Kentucky’s economy (measured by state personal income without adjusting for inflation) has grown 19 percent since 2007. To keep government services from shrinking, revenue should more or less keep up with economic growth. But General Fund tax receipts as a whole grew only 9 percent over that period, and revenue from the sales and use tax (Kentucky’s second-biggest revenue source) grew only 7 percent. Individual income tax receipts, in contrast, grew 22 percent.

Overall, the individual income tax generated 89 percent of all of the General Fund tax revenue growth over that period. If it weren’t for the revenue recovery in the income tax, the state would’ve had to implement even more devastating cuts to education, health and human services.

Income taxes tend to rise more rapidly than sales taxes during periods of economic recovery. That is particularly true in the current recovery, where the incomes of wealthy individuals have grown substantially while low- and middle-income individuals’ incomes are stagnant.

Despite the individual income tax’s importance to a state’s tax mix, some argue for eliminating the tax—as in Tennessee or Florida—or reducing it, as North Carolina did recently. Either option would further weaken Kentucky’s ability to generate adequate revenue—already a major challenge because our tax system has too many exemptions and exclusions. In addition, it would shift tax responsibility away from the wealthy and towards low- and middle-income Kentuckians. Unlike the sales tax, Kentucky’s individual income tax is progressive, meaning those of greater means pay a higher share of their income in taxes than those less able to pay.

Those reasons are why the Governor’s Blue Ribbon Commission on Tax Reform proposed to strengthen Kentucky’s income tax, rather than shift away from it. The recommendations of the commission limit higher-income people’s ability to claim itemized deductions and the exclusion for retirement income, while also making the tax fairer by including a state earned income tax credit. In all, the proposals would increase revenue from the individual income tax by $475 million.

It’s crucial that the upcoming General Assembly address Kentucky’s need for tax reform. It’s even more important that it do tax reform right—including by protecting and strengthening the income tax’s role as the cornerstone of a fair and adequate state tax system.