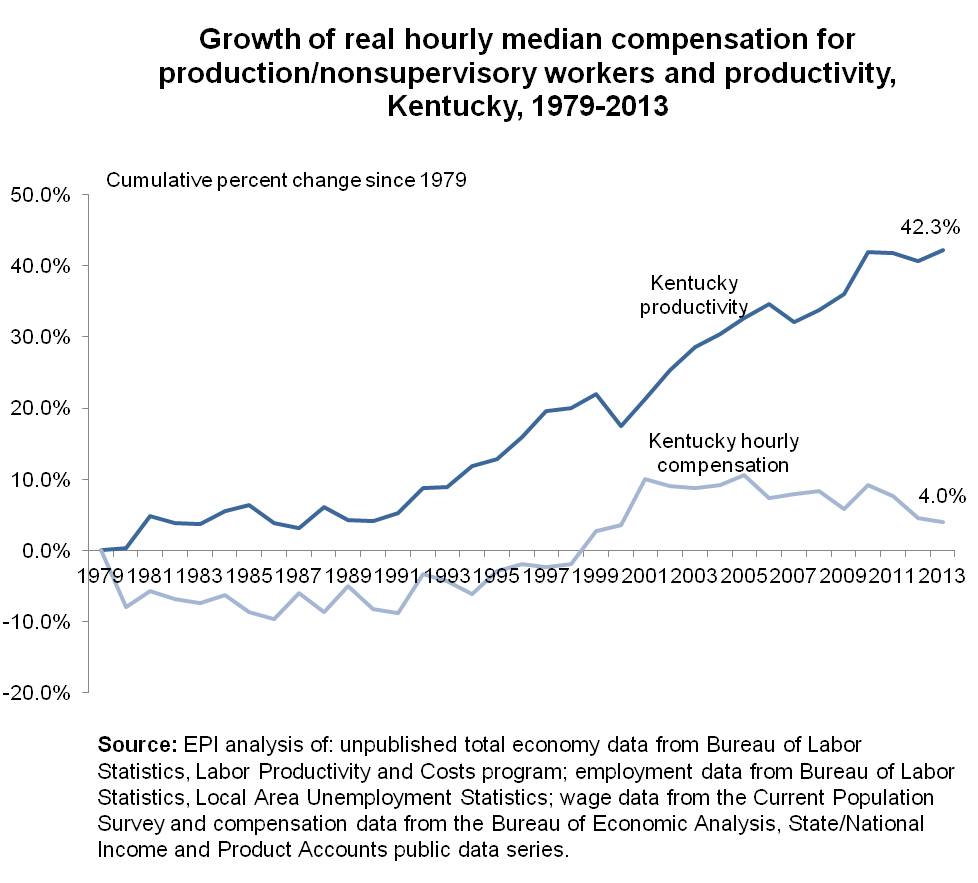 A big reason many Kentucky workers’ wages are stuck is that they’ve been left out of the gains from economic growth, which have been going in large part to those at the top.

This trend can be seen in the relationship between productivity—the value of the economic output produced per hour worked—and worker compensation.

Increases in productivity provide the basis for increases in workers’ living standards because it means the economy is generating growing wealth. In the United States from the late 1940s to the early 1970s, worker productivity and hourly wages grew together. But that link has been broken since then, with productivity rising even while workers’ wages stall.

The graph below (provided by the Economic Policy Institute) shows the trend in Kentucky worker productivity and compensation over the last 35 years. While productivity remained relatively flat through the 1980s, it began growing in the 1990s. In 2013, it was 42.3 percent higher than it was in 1979 (in real dollars).

At the same time, Kentucky workers’ real median hourly compensation fell slightly after 1979 and was flat until the mid-to-late 1990s, when it began climbing in large part because the economy was near full employment at that time, meaning a scarcity of available workers pushed wages up. Since the early 2000s, however, compensation has been flat or declining. In 2013, it was only 4 percent higher than it was in 1979 in real dollars.

That means Kentucky workers’ productivity has grown over 10 times faster than workers’ wages over the last few decades. A similar pattern appears at a national level. Over the period 1979 to 2013, U.S. worker productivity grew 76 percent while median compensation grew only 11 percent.

The bottom line is that despite periodic setbacks in the form of painful recessions, our economy has been growing over the last few decades. But the gains from that growth aren’t being shared with workers, leading to stagnant wages and soaring inequality. The resulting income gap can be seen in other data as well, including the fact that the top one percent of Kentucky earners took home nearly half of the state’s income gains over the last few decades.

Actions that will raise wages are increasingly important, including a much-needed hike in the minimum wage—which will help a significant number of Kentucky workers—and fiscal and monetary policies in Washington that can get us back toward full employment.