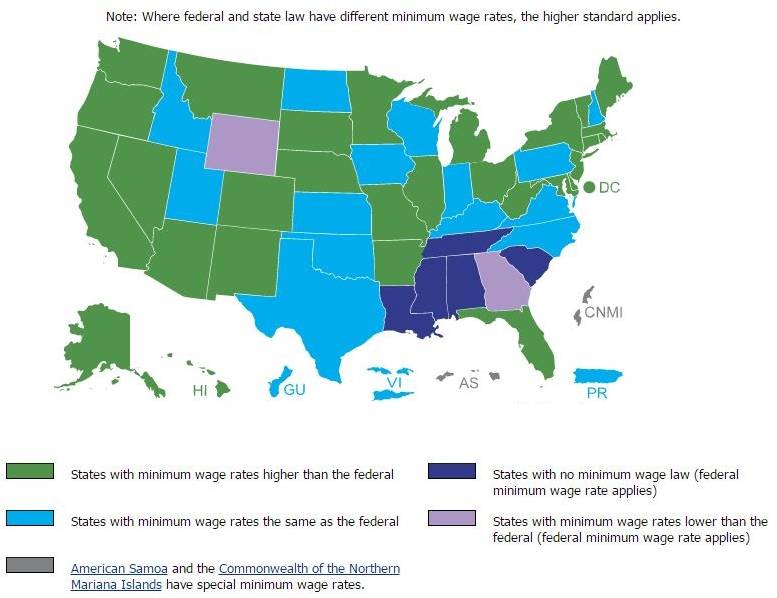 As momentum to increase the minimum wage grows around the country, Kentucky’s $7.25 minimum puts the Commonwealth in the unfortunate minority of states that haven’t boosted workers’ pay above the outdated level of the federal minimum wage. Sixty percent of American workers now live in a state that has lifted its minimum wage above the federal floor.

The current federal minimum wage of $7.25 was set in 2009 and has not been increased since to keep up with the cost of living. But erosion goes back farther: if the minimum wage had kept up with growth in productivity since the late 1960s—when it was enough to keep a family of three with one full-time worker out of poverty—it would be over $18 today.

To varying degrees, 29 states have addressed the need for a higher wage floor by legislating their own increases. These states include Kentucky’s neighbors Ohio, Illinois, Missouri and West Virginia. Twenty states raised their wages on January 1, 2015 by amounts ranging from 12 cents to $1.25 per hour for wage rates that start at $7.50 in Arkansas and rise to $9.47 in Washington State. The Economic Policy institute estimates that these increases will put an additional $1.3 billion in 3.2 million workers pockets in 2015.

Some of these changes were the result of legislation that incrementally lifts states’ wage floors over the next couple years; by 2017, for instance, Arkansas will have an $8.50 minimum wage, and beginning December 31, 2015, workers in West Virginia will make $8.75 per hour. Other increases were automatic in nine states where the minimum wage is tied to inflation, including Florida, Missouri and Ohio. Nevada, the 10th state with an indexed minimum wage, adjusts its wage in July. Five more states including Michigan as well as the District of Columbia have passed laws to begin indexing by 2019.

In addition to the 20 increases that took place on January 1, New York raised its minimum wage on December 31st, 2014 and Minnesota and Delaware are scheduled to increase wages later in 2015. All counted, state minimum wage increases from December 31, 2014 through August 2015 will put an estimated $1.7 billion more into workers’ pockets this year.

Kentuckians deserve decent pay for a hard day’s work just like the rest of Americans do. While 45,000 workers in Louisville/Jefferson County stand to benefit from the recently-passed metro government ordinance that will lift the city’s minimum wage to $9 an hour by July 2017, 10 times that many workers would benefit from a statewide increase to $10.10, as proposed by House Bill 2.