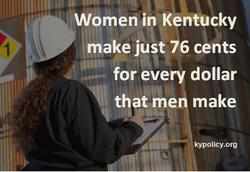 Kentucky gets a D+ and ranks behind two-thirds of other states in terms of women’s status, according to a recent report by the Center for American Progress. The detailed report card breaks down indicators of women’s well-being in the areas of economic security, health and leadership. It also points to key policies and priorities that would benefit women, their families and Kentucky’s economy at large.

State and federal policy changes could lift the economic status of women. The 2013 Fair Minimum Wage Act—which proposes to raise the minimum wage to $10.10 an hour—would especially benefit women since more than half (56.5 percent) of the Kentucky workers affected are women. Likewise, while few states mandate paid family, disability and sick leave, enacting such policies in Kentucky would allow all workers but particularly women to deal with major personal and family occurrences without risking economic insecurity. Access to high-quality, affordable childcare also directly impacts women’s economic security and their children’s success. On the other hand, cuts to programs like Kentucky’s Child Care Assistance harm women’s ability to obtain and hold jobs that provide family-sustaining wages.

While many low-income pregnant women in Kentucky are eligible for Medicaid during pregnancy and for two months after, research shows that women who have health insurance prior to and between pregnancies are healthier during pregnancy, and so are their babies. Kentucky is already taking a significant step towards better health—and therefore better economic security—for women with and without children by expanding Medicaid.

While women are not legally barred from elected office or management positions, institutional and cultural sexism—as well as the economic and health factors explored in the report—limit women’s ability to climb the ladder.

Kentucky has progress to make in improving the status of women. Poor economic security, limited access to the kinds of care that women need and underrepresentation in leadership roles comprise a vicious cycle that keeps women from greater well-being. But good policies can help transform a vicious into a virtuous cycle that benefits women and our state.