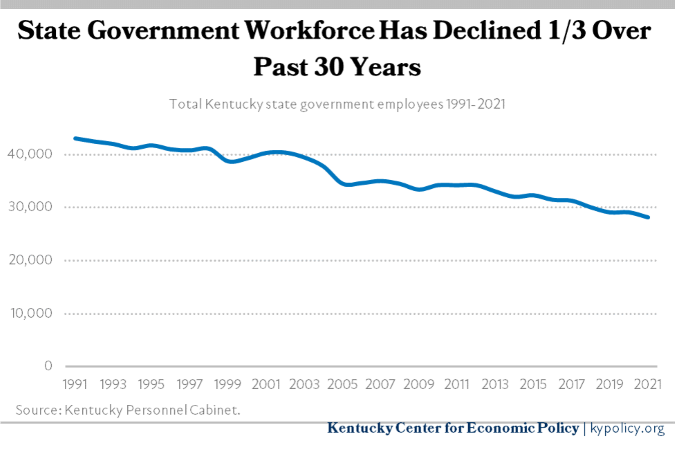 Kentucky faces a crisis-level shortage of workers in state government. Past legislative actions resulting in poor job quality for public defenders, social workers and all other public service positions mean that qualified Kentuckians can find better jobs elsewhere, especially in today’s tight labor market. A new report from the Personnel Cabinet finds that eroding compensation and especially retirement benefits for state workers have made recruitment and retention extremely difficult. Combined with the impact of budget cuts that have eliminated state positions, the result has been a long, steady decline in the size of our state workforce, dropping nearly 15,000 over the past 30 years, a 34.6% decline (see below).

While the 2022 General Assembly took initial steps to address the crisis, including 8% across-the-board raises for state employees, targeted additional increases for certain positions, $200 million set aside for further compensation changes in 2023-24, and the commissioning of the aforementioned analysis, what the report reveals is a system in dire need of sustained commitment to job quality.

The Personnel Cabinet study found that Kentucky’s salary schedule and system for compensating state employees is fundamentally sound, and would work as intended if adequately funded and followed. But the failure of the General Assembly to provide annual increments to existing employees and to adjust the schedule that sets initial compensation for new employees has resulted in low wages relative to the private sector as well as “wage compression” for existing state employees.

The report describes how wage compression is particularly problematic in retaining existing employees because it means new hires earn the same or even sometimes more than employees who have been working in the same position for several years. The problem is worse in some classifications such as social workers and correctional officers because of starting salary increases that were implemented to address recruitment issues without commensurate increases for existing employees. When new hires make as much or more than existing employees, morale suffers and retention declines.

Yet even new hires aren’t making enough, as the starting pay schedule hasn’t been meaningfully updated since 2007. Starting wages have stagnated so badly in state government that over 1,500 current executive branch employees are eligible for and use public assistance just to make ends meet. To address these issues, the Personnel Cabinet recommends annual increments (with a specific increase of 6% recommended for 2023-24) and annual adjustments to the salary schedule by the amount of the annual increment.

Until 2014, state employees were guaranteed a pension for completing the required years of service with state government. Although the General Assembly weakened the retirement benefit in several cycles including in 2008 to require more years of service and additional contributions, the state pension plan still provided a guaranteed annual pension until 2014. State retirement benefits served as a valuable recruitment and retention tool to offset lower salaries because they were far superior to those offered by the private sector, and continued employment with state government was required to access them.

In 2014, this all changed. The state plan was revised, and new hires are now offered a hybrid/cash balance retirement plan rather than a defined benefit plan. The new plan, known as Tier III, is more risky and far less generous for workers. Because of these changes, as the Personnel Cabinet notes, “The current plan available for new employees is no longer a recruitment or retention benefit and does not provide an advantage for state government when compared to the public and private sectors.”

Today there is less reason for Kentuckians to make a lifelong career in state government. According to the report, not just because of a lack of retirement security but also because of uncompetitive wages, turnover has exceeded 20% across the three branches of government, and has soared to nearly half in certain agencies like the Department for Community Based Services.

The majority of the Personnel Cabinet recommendations focus on pay. In addition to changes mentioned above related to annual increments and adjustments to the salary schedule, the cabinet recommends:

Collectively, these changes account for all of the $200 million in General Fund monies that the General Assembly set aside for an increase in state employee compensation.