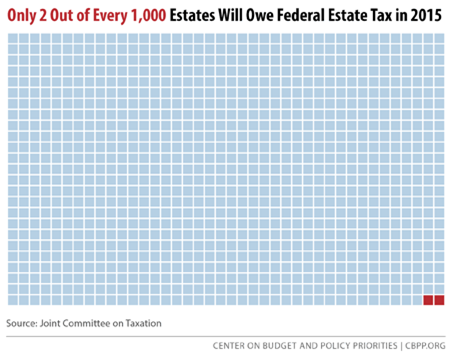 The U. S. House of Representatives is expected to vote this week to repeal the federal estate tax, an idea that would worsen growing inequality and reduce revenue needed for investments that move our economy forward. As a poor state, Kentucky is an especially big loser in this proposal.

Contrary to the impression given by those clamoring for repeal, only the wealthiest 0.2 percent of estates face the estate tax. Kentucky is expected to have only about 40 estates owing the tax in 2016, or 0.7 percent of taxable estates nationwide. In contrast, our state makes up 1.4 percent of the U. S. population, meaning Kentuckians are deeply under-represented in the super-rich group that would gain from estate tax repeal.

At the same time, Kentucky is over-represented in our reliance on federal dollars to strengthen our economy and invest in our people and communities. Kentucky receives about $6,496 per person annually in federal aid to individuals, ranging from Medicare and Social Security to Pell Grants and unemployment benefits. That’s eighth-highest among the states and 15 percent more than the U. S. average of $5,662. And like all states federal money comes to Kentucky every year for areas like infrastructure, education, research and economic development that support commerce and improve quality of life. 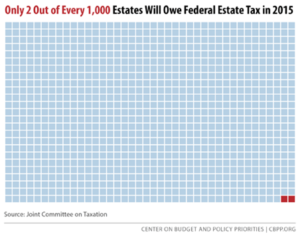 Eliminating the tax would cost $269 billion in reduced tax revenues over the next decade. And repeal would provide a tax cut of over $3 million on average to the estates that will benefit, with the country’s richest 316 estates—worth at least $50 million—getting a tax giveaway averaging more than $20 million apiece.

Repeal would also deepen soaring wealth inequality. The wealthiest 1 percent of U. S. families have 42 percent of all wealth. Inheritances make up 40 percent of all household wealth and skew heavily to the very top. The estate tax serves as a backstop to the income tax, ensuring that prosperous individuals who hold significant wealth in unrealized capital gains pay some tax on their earnings that they wouldn’t otherwise pay if they held those assets until death. More than half of the wealth of large estates is in the form of unrealized capital gains.

Getting rid of the estate tax would be on top of actions starting in the early 2000s to raise the threshold of wealth needed to be eligible for the tax and cut the rate. The share of Kentucky estates owing estate tax has fallen from 1.5 percent in 2000 to just 0.1 percent in 2012. The estate tax is now a very modest tax applying to a shrinking number of very large estates, with an average effective rate of only 16.6 percent.

We need a tax system that fairly generates the revenues for investments that make our economy stronger and our communities better. Estate tax repeal is a step in the opposite direction.