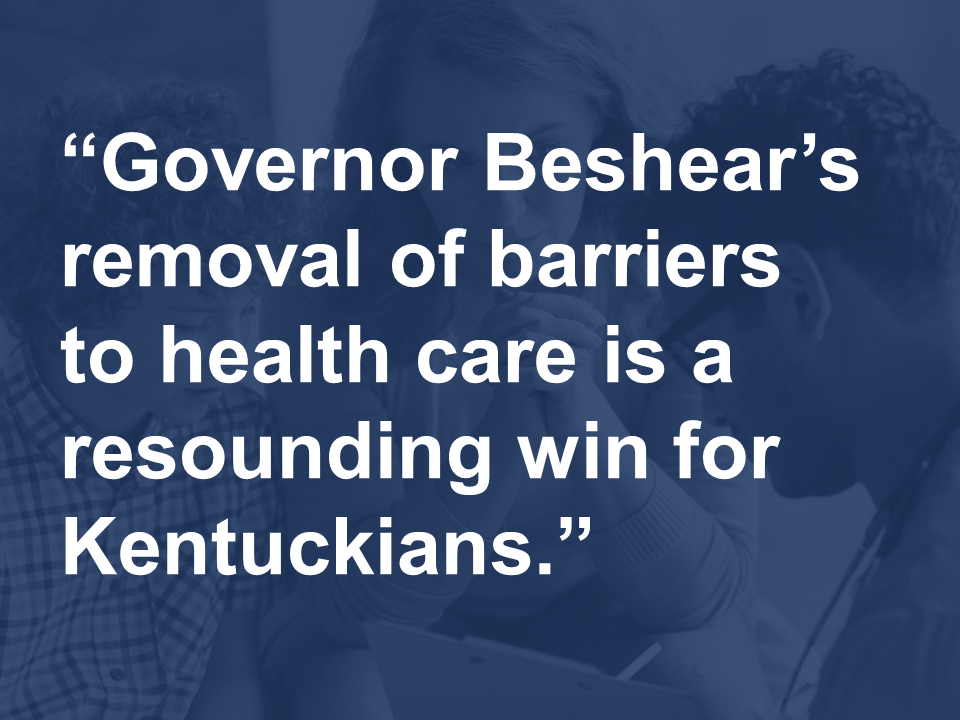 The InsureKY campaign and our partners commend Governor Beshear for taking swift action to withdraw the 1115 Medicaid Waiver known as Kentucky HEALTH. The waiver would have created numerous barriers for low-income families and underpaid workers of all ages, races and areas of the state who rely on Medicaid for affordable, quality healthcare, but a federal court blocked its implementation, finding that the federal government failed to adequately examine its effect on Medicaid coverage.

Governor Beshear’s decision to reverse course on the Bevin administration’s Kentucky HEALTH waiver comes nearly two years after it was first approved by the Centers for Medicare & Medicaid Services (CMS). The waiver, with its work requirements, high premiums, lock out periods and complicated paperwork, has been the subject of a federal lawsuit brought by sixteen Kentuckians who would have been directly affected by a number of policies largely considered to be illegal in the Medicaid program. Had the waiver been implemented, it would have resulted in an estimated 136,000 Kentuckians losing healthcare coverage in the first year alone.

Certain elements of Kentucky HEALTH did not require an 1115 waiver. The expansion of substance use disorder services implemented prior to the waiver’s approval can remain intact, as well as the ability to use federal Medicaid financing for care provided to most patients in mental health and substance use disorder residential treatment facilities larger than 16 beds.

“This is a huge victory for consumer health advocates and the thousands of Kentuckians who raised their voices to oppose harmful barriers to care,” said Emily Beauregard, executive director for Kentucky Voices for Health. “More than 400,000 Kentuckians can breathe easier today, knowing that they won’t be at risk of losing access to the healthcare services they need to maintain their health, can go to work without worrying about an illness or injury, and can take care of their families.”

Debra Wittig, a plaintiff in the case arguing the legality of the waiver, has struggled with rheumatoid arthritis, psoriatic arthritis, and osteoarthritis since her 20s. Trying to manage these chronic conditions without health insurance was impossible and her career in health care fell apart because of her health problems.”I am one of the almost half a million Kentuckians who have health insurance because of Medicaid Expansion,” said Ms. Wittig. “For me, it is no exaggeration to say that former Governor Steve Beshear’s decision to expand Medicaid in Kentucky saved my life. Before getting health insurance in 2014 through Medicaid expansion, I had lived for 20 years without health insurance.” Since having Medicaid coverage, Debra has been able to get regular treatments for chronic health conditions. After getting the health care she needed, she was able to return to work.

“Medicaid is a great deal for the state and a boon to our economy,” said Dustin Pugel, policy analyst with the Kentucky Center for Economic Policy. “This decision to abandon costly and harmful barriers to Medicaid not only ensures that our historic gains in coverage can continue, but that billions in federal dollars, thousands of new jobs, and a healthier workforce can remain intact; this is good news for the commonwealth.”

“It is heartening to see that expanded substance abuse services provision and a waiver of IMD exclusion in many cases were able to happen without a Kentucky HEALTH waiver,” said Marcie Timmerman, executive director for Mental Health America of Kentucky. “Kentuckians are unified in their goals to increase access to mental health care and substance use disorder treatment. Mental Health America of Kentucky looks forward to working with the Beshear administration and legislators to eliminate barriers to coverage and care.”

Sheila Schuster with the Advocacy Action Network said, “Governor Beshear’s commitment to making healthcare a human right for all Kentuckians is a game changer for our Commonwealth, We’re excited to work with the new administration to further reduce barriers to care and increase the reach of our community safety-net, particularly for our most vulnerable Kentuckians with behavioral health issues and other disabling conditions.”

“Throughout the Kentucky HEALTH waiver process, we have been concerned that undermining health coverage reduces housing security,” said Adrienne Bush, executive director for the Homeless and Housing Coalition of Kentucky. “With this executive order, we expect that our neighbors experiencing housing insecurity will be able to access care with certainty and stability moving forward, and we look forward to making improvements to align Medicaid with supportive housing in the future.”

About InsureKY – InsureKY is a statewide coalition of nonprofits formed to promote more affordable health insurance, better care, and stronger consumer protections for all Kentuckians.