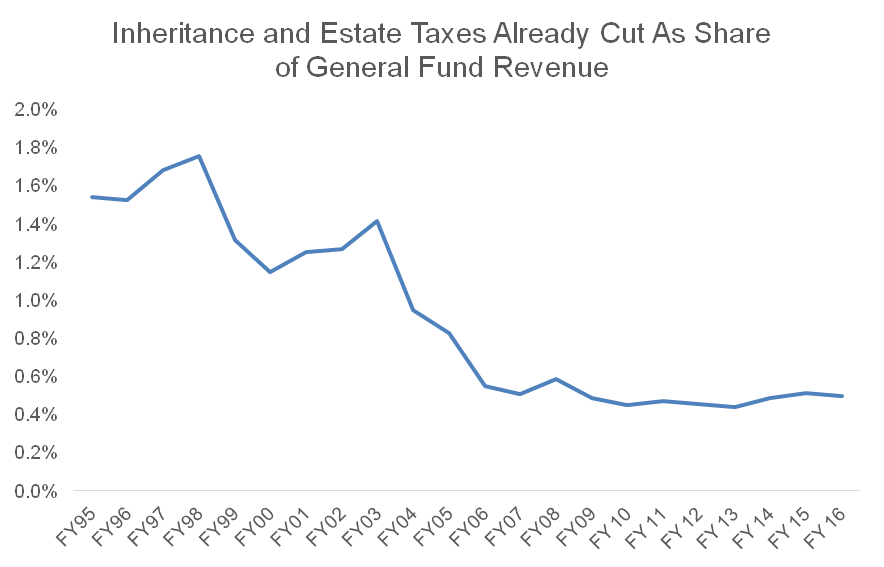 To view this brief in PDF format, click here.

Since 1906, Kentucky has relied on the inheritance tax to help pay for the good schools, infrastructure and other investments that strengthen the Commonwealth. A repeal of the inheritance tax would be a $51 million tax cut tilted to the very wealthy that would weaken those investments and make economic progress harder in the state.

Kentucky’s inheritance tax applies to few inheritances because of exemptions put into the tax by the General Assembly. In 1995, the legislature began phasing it out for children, grandchildren, parents and siblings so that by 1998, these beneficiaries became totally exempt from the tax (spouses were exempted in 1985).

Today, the tax only applies to more distant relatives and beneficiaries. It’s also graduated so that higher taxes are paid on larger gifts and more modest taxes apply to small gifts. For example, a gift of $10,000 is taxed at 3.6 percent while a gift of $100,000 is taxed at 8.5 percent (for what are called class B beneficiaries). To make it easier to pay the tax, those who owe more than $5,000 in inheritance taxes can pay the tax over a 10 year period 1. Funeral expenses, costs associated with representation, debts, property taxes and mortgages are deducted to arrive at the taxable amount 2. Furthermore, to reduce the tax on inherited farms, and as long as the inheritor maintains “agricultural or horticultural use” of the land for five years, such property is assessed at its much lower agricultural value rather than market value 3.

Instead of helping family farms, as is often claimed by opponents of the inheritance tax, repeal would further a pattern in which Kentucky is gradually eroding its taxes on wealthy individuals. In addition to expanded exemptions to the inheritance tax, the state let its estate tax expire in 2005 as part of federal estate tax cuts 4. The estate tax only applies to those with extreme wealth, and 11 states have taken action to protect the tax after the federal changes. But in Kentucky, estate and inheritance tax revenues have fallen 55 percent since 2001, once inflation is taken into account. If these taxes were the same share of state revenue in 2016 they were in 1995 (see graph), Kentucky would have $108 million more for its schools and other foundational investments. To put that amount in perspective, it’s about how much the state spends on preschool and school textbooks combined.

Repeal would benefit the wealthiest at the cost of vast majority

Those who would benefit most from inheritance tax repeal are the people whose incomes and wealth — and therefore ability to pay taxes — have grown the most in recent years. Over the last 35 years, the top 1 percent of income earners in Kentucky (those with average incomes of $620,000) saw their real incomes grow 60 percent while everyone else’s fell 2.6 percent 6.

Furthermore, the inheritance tax helps ensure fairer taxation of wealth that otherwise might go untaxed during a high-income individual’s lifetime. For households at the top, wealth is primarily in the form of direct ownership of financial assets like stocks and bonds 7. In the case of assets like stocks or real estate, income tax on the value of the asset applies only when an owner “realizes” a gain, usually by selling it. But if an individual holds onto such an asset until they die, that capital gain is never taxed. Inheritances taxes are a backstop to help address that loophole.

And since inheritance tax money goes into the General Fund to help pay for investments like Kentucky’s public schools, universities and more, an inheritance tax cut for the wealthy would harm the very systems that strengthen economic opportunities for everyone.

Repeal of the inheritance tax would also make Kentucky’s already upside-down tax system even more unbalanced. Currently, low to middle-income Kentucky families pay between 9 percent and 10.8 percent of their income in state and local taxes, while the top 1 percent pay only 6 percent 8.

Revenue needed for investments that work

Those who support eliminating inheritance and estate taxes make the unsubstantiated claim that these taxes cause residents to leave states that have them. But research fails to find a connection between where the elderly choose to live and state inheritance and other taxes. While many states have changed these taxes in recent decades, elderly migration patterns have not changed in response 9. More broadly, it is a myth that states should be worried about “tax flight:” few Americans move from one state to another each year and among those who do the most common reasons are for a job, family considerations, weather and lower housing costs — not taxes 10. Rather than benefitting the economy and therefore the budget, repealing the inheritance tax would result in a big loss of tax revenue to the state.

The lack of sound policy purpose for eliminating the inheritance tax is why it was missing from the 54 recommendations of the Blue Ribbon Commission on Tax Reform in 2012. None of Kentucky’s prior tax studies and commissions has recommended eliminating the inheritance tax. In addition to generating revenue and increasing the fairness of the tax system, inheritance and estate taxes encourage heirs to work and incentivize contributions to charities 11.

With the need to invest additional resources in education, health, human services and other state priorities and to pay down our large pension liabilities, Kentucky has more important budget priorities than a tax cut for wealthy individuals whose incomes have soared in recent years.