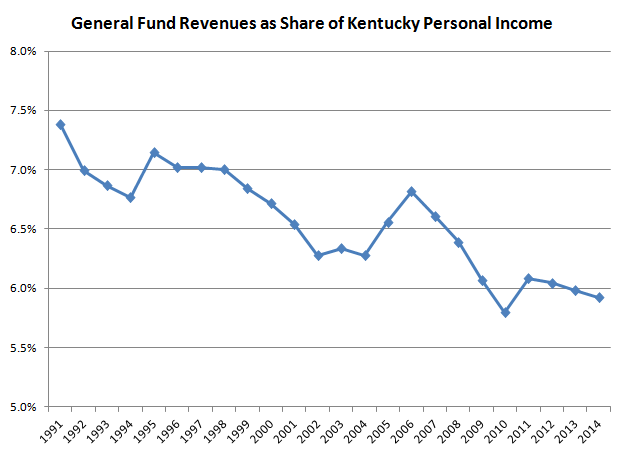 While the still-weak economy and the end of federal recovery-related assistance are important factors in the tight budget now being considered in Frankfort, long-term structural problems with Kentucky’s tax system also play a big role.

Economists say that a state’s tax revenue should grow in line with its economy in order to keep up with approximate growth in costs. Kentucky’s General Fund revenue has been declining as a share of the economy for a long time, and that trend is expected to continue over the next two years (see the Figure below). Under the official state forecast, revenues will dip slightly below six percent of state personal income in 2013 and 2014.

If the tax system was able to perform as it did over much of the 1990s, when General Fund revenue was around seven percent of state personal income, Kentucky would have over $1.5 billion more a year to address shortfalls in education, health and other critical areas. To put that amount into context, State Budget Director Mary Lassiter told the House Appropriations and Revenue Committee today that $1.3 billion has been cut from appropriations over the last four years.

Reforms like broadening the sales tax to include services, making the income tax more progressive, and removing targeted tax deductions, exemptions and loopholes would result in a more reliable stream of revenues.