With the state’s new barriers to Medicaid coverage soon to be erected under the guise of encouraging work, we’ve heard a lot in Kentucky recently about the health benefits of working. Besides the fact that revoking coverage for low-income Kentuckians who fail to meet a work requirement has been shown as ineffective in promoting employment, these barriers do nothing to improve the low quality of jobs in Kentucky, which evidence shows is crucial to better health outcomes. Rather than jeopardizing access to health coverage, an effective approach to promoting health through work would be to enact policies that improve job quality.

Jobs with low wages, few benefits and volatile hours are linked to poor health. Kentucky’s low-quality jobs — including in food service and retail — do not pay enough for families to make ends meet; 30 percent of Kentuckians are in jobs that pay less than $12 an hour. Nationally, 1 in 3 private sector workers and more than 2 out of 3 of the lowest-income workers don’t have access to even one paid sick day. And at least 17 percent of the U.S. workforce has unstable work schedules, with an estimated 90 percent of hourly retail workers experiencing irregular hours at work.

Workers without paid sick days are more likely to delay needed medical care, which can result in prolonged illnesses and lead to minor health problems developing into major, more costly ones. These workers are three times more likely than workers with paid sick leave to neglect medical care — including preventive care such as cancer screenings, annual physicals and immunizations — for themselves and nearly two times more likely to forgo medical care for their families. This lack of sick days ultimately harms kids’ health and public health more generally. Less productive, ill and possibly contagious Kentuckians are forced to choose between going to work (and sending kids to school) or losing income and even being fired for not going to work. Ten states have passed laws requiring employers to provide a minimum amount of earned paid sick leave for workers in their state, and nothing is keeping Kentucky from doing the same.

Increasingly common unfair scheduling practices — such as “just-in-time” and on-call scheduling that provide little to no advance notice to workers — are also harmful. A recent study found unpredictable work schedules are negatively associated with well-being. This is because volatile scheduling can cause household economic insecurity, psychological distress, and reductions in parental time with children and the quality of childcare arrangements. The income volatility often experienced by workers with variable schedules can hurt sleep and food sufficiency as well as self-rated health, and elevated levels of work stress are related to unhealthy behaviors such as smoking and alcohol consumption. In some parts of the country, policies are in place to guarantee advance notice of work schedules and hold workers harmless for reasonable scheduling requests – something Kentucky should pursue as well.

Commonsense laws that promote job quality, including through higher wages, would make Kentucky healthier. A 2016 study in Health Affairs found better health outcomes among states that enact economic policies that increase or protect wages for low-income people than in states that do not. Research consistently shows that higher income is associated with better health and greater longevity, due in part to the ability to purchase resources and afford a lifestyle that help people stay healthy.

Unfortunately, Kentucky’s recent state economic policy choices have harmed rather than supported job quality. Among others, the state has failed to increase its minimum wage for nearly a decade and passed wage-reducing “right-to-work” legislation in 2017. And the new red-tape laden work requirements going into effect for Medicaid and food assistance – even in economically distressed areas with more people looking for work than jobs available – will worsen health. Many participants in these programs already work, often in low-wage, low-quality, bad-for-health jobs where policymakers have done little to uphold a decent baseline of labor standards. The top industries of employment for Kentuckians receiving SNAP (formerly known as “food stamps”) in 2016 included restaurants and department, discount and grocery stores. Poor scheduling practices in these industries could leave many Kentuckians without enough work hours in a given month to meet the requirements for keeping health or food assistance; not to mention the threat of an illness or emergency that causes one to lose work hours.

Our job quality problems are solvable – there are policies other states have already enacted to address them. If our state is truly committed to promoting the health of Kentuckians through work, it will abandon its proposed barriers to benefits and instead enact policies that support families and boost wages. We can and should promote health through work, but not by punishing workers for jobs that make them sick. 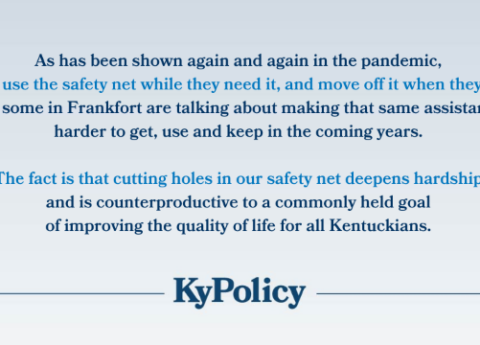