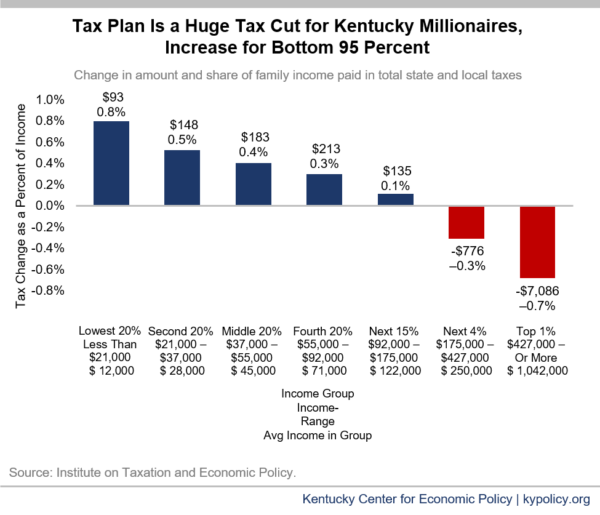 During the waning hours on the last day of the session before the veto period, the General Assembly hastily passed House Bill 366, a bill that represents a shift of responsibility for taxes away from corporations and wealthy individuals toward low- and middle-income Kentuckians. Combined, its individual income, corporate income, sales and cigarette tax provisions will make Kentucky’s tax system even more regressive than it already is.

A new analysis of HB 366 by the Institute on Taxation and Economic Policy (ITEP) shows the dramatically skewed impact of the tax changes on Kentuckians by income group. As can be seen in the graph below, Kentuckians whose income puts them in the top 5 percent will see a tax cut, with those in the top 1 percent, whose average income is $1,042,000, receiving an average tax cut of $7,086. Every other income group will experience a tax increase, with the largest impact as a percent of income on those in the bottom 20 percent who make less than $21,000 per year. This is because the income tax cuts benefit the wealthy the most while the cigarette tax rate increase, expansion of the sales tax base and elimination of the bottom income tax brackets impact low- and middle-income Kentuckians to a higher degree (for the bracket changes, those above eligibility for the low income tax credit are impacted).

This analysis was produced by ITEP using their microsimulation tax model. The analysis incorporates personal, corporate, sales and tobacco tax changes under HB 366.

Kentucky’s tax code is already regressive, with those at the top paying the least as a share of their income and moderate- to middle-income Kentuckians paying the most. HB 366 will make our upside-down tax system even worse. 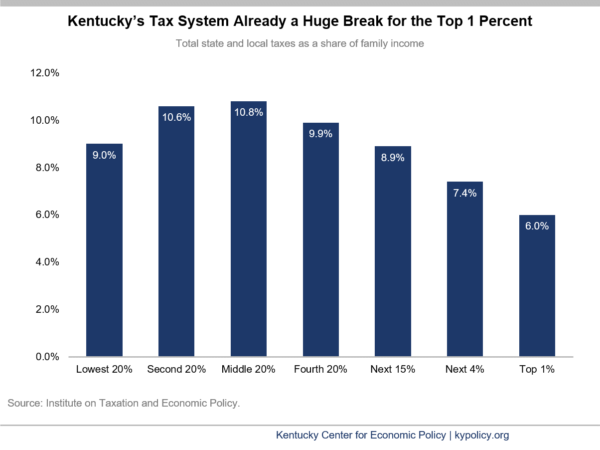 In addition to shifting even more of our reliance for revenue onto low- and middle-income Kentuckians, HB 366 will exacerbate erosion in Kentucky’s General Fund over time by switching from faster growing income taxes to slower growing consumption taxes. Historically, growth in the individual income tax has outpaced growth in the sales tax, protecting the General Fund and preventing even deeper budget cuts than we’ve had. Further, after the bump from the tax increase, cigarette tax revenues will continue to decline, as they have for the past several years. In short, the shift is not only a tax increase for the vast majority of Kentuckians, it is also bad for the long-term viability of the General Fund. 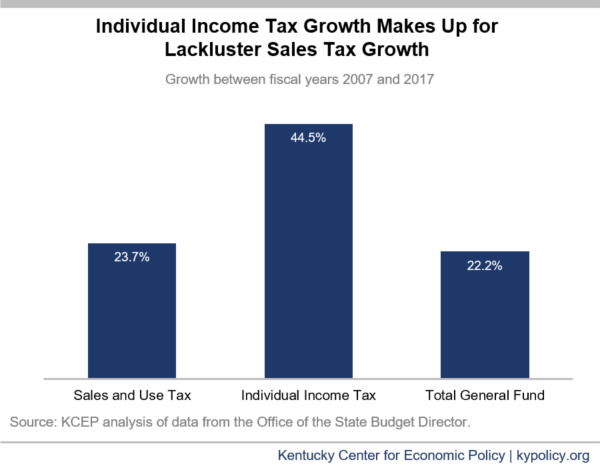 Despite claims that income tax cuts mitigate revenue losses by stimulating economic growth, the experience of other states that have enacted trickle-down tax cuts does not support a positive outlook for the commonwealth’s budget.