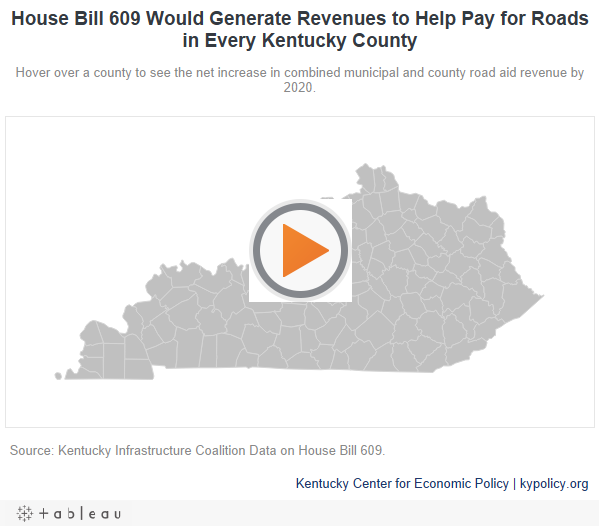 There is a lot at stake for Kentucky communities in House Bill 609. This comprehensive funding bill would generate over $433 million a year when fully phased in to prop up the state’s ailing Road Fund, the primary source of state funds for road construction and maintenance. It would also provide much-needed new revenues for the Municipal and County Road Aid Programs, which distribute a portion of the revenues generated from several taxes related to motor fuels to cities and counties.

Due to a statutory reduction in the rate on motor fuels taxes, the Road Fund and the Municipal and County Road Aid Programs experienced a steep drop in revenues between 2014 and 2016 from which they still have not recovered. At the same time, the list of road construction needs has grown, with more than 1,100 structurally deficient bridges and more than 3,700 miles of road that need significant repairs. The backlog of pavement improvements alone totals approximately $1 billion and is growing at a rate of 500 miles of roadway each year.

HB 609 is a comprehensive funding bill that would increase several rates and fees. It would begin modernizing Road Fund revenues by adjusting the supplemental highway user motor fuels tax by growth in the cost of construction and by applying a fee to hybrid and electric vehicles. These changes will allow Road Fund revenues to better keep up with the costs of maintaining roads even as cars and trucks become energy efficient. The bill would also provide monies to help Kentucky pay down its pension liabilities. That is because the Department of Highways is the second-biggest employer in the underfunded Kentucky Employees Retirement System non-hazardous plan, with nearly 4,000 employees.

The bill benefits the economies of local counties and cities across the commonwealth. The map below includes only the increase in the motor fuels taxes that would be distributed directly back to local communities through the Municipal Road Aid Program and County Road Aid Program, combined by county. The total amount of new money that would go back to counties and cities through these two streams alone at full implementation is approximately $88 million, which represents a much-needed 48.8 percent increase in available funds over what is currently distributed. In addition to the funds depicted in this map, the Transportation Cabinet would have an additional $76 million to expend in counties.

Note: The data in the map are based on the current distribution scheme, in which 18.3 percent of motor fuels tax revenue is distributed back to Kentucky counties based on a statutory formula, and 7.7 percent is distributed to cities based on population. When the House Appropriations and Revenue Committee discussed House Bill 609, they also discussed but did not adopt a revised local distribution formula.