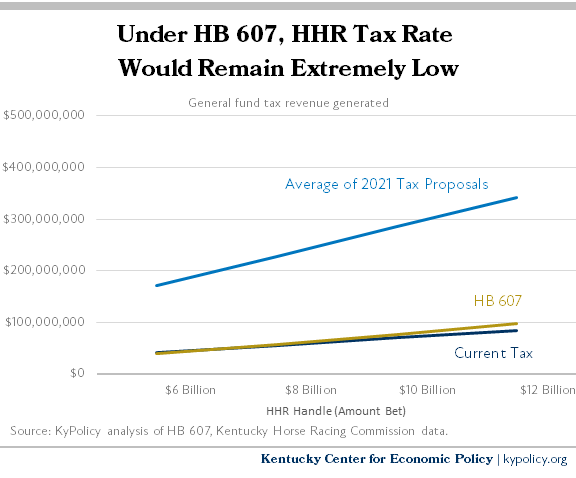 A bill that was supposed to raise the tax on historical horse racing (HHR) slot machines (HB 607) doesn’t increase the tax rate and only tinkers with the proceeds to generate a tiny fraction of what a reasonable proposal would raise for Kentucky’s General Fund.1 As HHR grows as expected, under HB 607 Kentucky will continue to miss out on hundreds of millions of dollars a year for our schools, health care and other public needs because the tax rate will remain egregiously low.

In the fall of 2020, the state Supreme Court ruled unanimously that HHR slot machines did not meet the definition of pari-mutuel wagering. In the 2021 Kentucky General Assembly, lawmakers passed legislation to change the definition of that term to allow HHR to continue operating legally. In recognition that only 8% of the gross commission (the amount received by the industry after payouts) from these machines goes to Kentucky’s General Fund compared to 25%-50% or higher from slot machines in nearby states, a coalition pushed for raising the tax rate. Four bills or amendments were introduced — two by Republicans, two by Democrats — that would raise the effective tax rate to 25%-35% of gross commission (HB 156 by Rep. King, HFA 6 to SB 120 by Rep. Duplessis, HB 481 by Rep. Willner, and HB 594 by Rep. Gentry), a rate still below that of many states.

The legislature did not raise the tax during the 2021 session. But a task force was formed to examine the rate, and the tracks pledged “to work constructively to revise and raise the tax structure on historical racing machines, including consideration of a fair and equitable graduated tax structure.” The state’s tax expenditure analysis released in November revealed the state would lose $205 million annually by 2024 because of the artificially low tax rate on HHR.

However, HB 607 does not raise the tax rate on HHR at all, only making minor adjustments to where the proceeds of the tax go. If the amount bet on HHR machines rises from today’s $6 billion annually to $12 billion in a few years, HB 607 would generate only approximately $13 million more annually for the state’s General Fund. In contrast, raising the tax to the average of the rates proposed by Republicans and Democrats in the 2021 session (a 30% rate on gross commission) would generate approximately $260 million more each year.

HHR has exploded in recent years and huge expansions are planned and have been announced since the legislature legalized it last year. In 2015, $373 million was bet on HHR machines across the commonwealth. That number has grown more than 1600% since that time to over $6 billion this year. And that’s with 5,591 machines currently operating. The Kentucky Horse Racing Commission has approved and HHR facility owners have announced approximately another 6,500 machines to be installed in the coming years — more than doubling HHR again and putting the amount bet per capita in Kentucky on par with what you see in a “casino state” like Ohio.

Churchill Downs, which owns about half of the HHR facilities, already pays much higher tax rates on its slot machines in other states. It owns two casinos in Pennsylvania which has a 55% tax rate; a casino in Ohio with a 33% rate; one in Illinois with a graduated rate up to 50%; another in Florida with its 35% rate; one in Maryland with a rate of 40%-61%; one in Maine where the rate is 39%-46%; and one in Louisiana where the rate is 21.5%-35%. But in Kentucky it pays only 8% to the state’s General Fund.

Kentucky is getting casino-scale gambling because of the legalization of HHR. But we will not receive casino-scale tax revenues for our schools, infrastructure, human services and other needs because of an extremely low tax rate, and that would remain the case under HB 607.