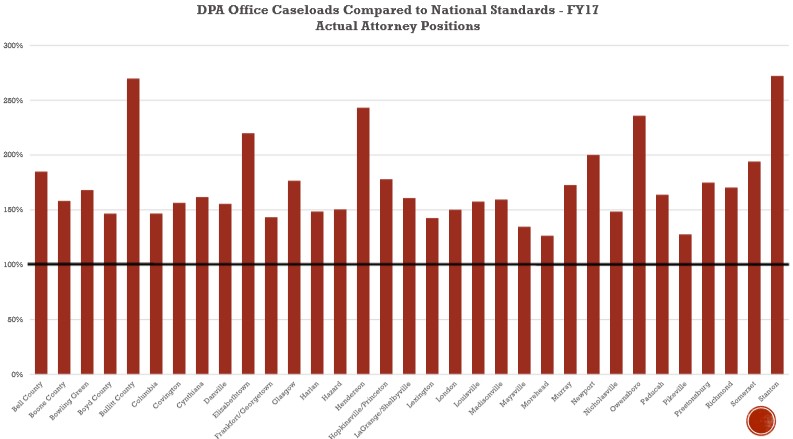 Even with some increased investment in the justice system proposed in the governor’s budget, many areas within the system would continue to just get by, while others would be facing even deeper financial problems. This underfunding is important to keep in mind as the House prepares to release its budget proposal.

The additional funding for the Department of Public Advocacy (DPA) proposed by the governor is helpful but is just the minimum amount necessary to enable the DPA to meet its court-ordered and ethically and constitutionally mandated responsibilities. Current funding levels are not enough for them to meet these obligations.

The “additional” attorneys funded in the governor’s budget would simply allow the DPA to hire the number of staff they need to operate. There has been a hiring freeze, with only 518 staff doing the work when 552 are needed.

Even with the governor’s proposed increase in DPA funding, caseloads will still be high as seen in the graph below, which illustrates what caseloads would have been in 2017 with these additional staff members. 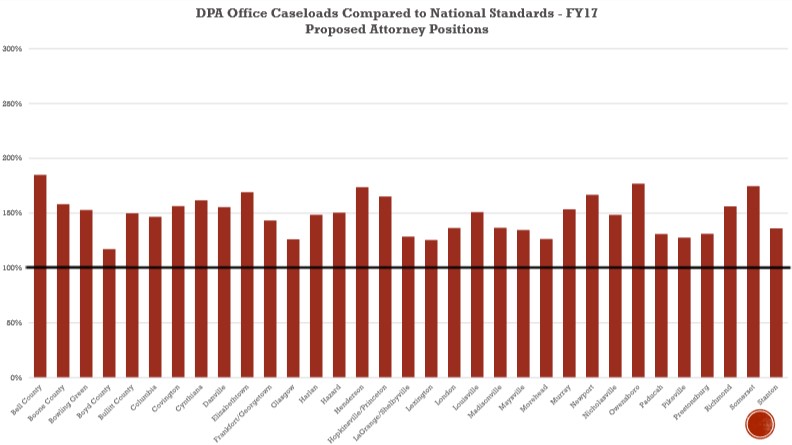 The additional funding for DPA proposed in the governor’s budget would also help with a structural deficit moving forward. However, the budget proposal does not address the need for additional support staff or the low salaries of DPA attorneys, which leads to very high turnover; a 2015 report found Kentucky’s public defenders are paid 23 percent less than surrounding and comparative states.

The governor’s budget also proposes to eliminate state funding for the Access to Justice program. Legal aid programs like Access to Justice enable Kentuckians an avenue to courts for civil matters regardless of income, including many veterans and persons with disabilities who need such assistance to obtain needed benefits. According to recent testimony from Legal Aid of the Bluegrass, the cuts in the governor’s budget would lead to the elimination of 9 positions and around 7,000 low-income Kentuckians not having access to legal representation, which would hit rural and eastern Kentucky particularly hard.

Veterans Treatment Courts in Hardin and Fayette Counties Would Close

The governor’s budget does not include state funding to replace the federal funds that are ending for two of Kentucky’s four veterans treatment courts. These courts utilize a variety of wrap around services to help veterans achieve stable mental health and recover from addiction. Services include treatment, connection to benefits and help with housing, employment and education.

According to testimony provided to the Budget Review Subcommittee on Justice, Public Safety and Judiciary, while the governor apparently intended to exempt the state police from the 6.25 percent cuts most other areas of the budget experienced, the proposal actually makes these cuts to the state police. Even exempting the state police from cuts would just be “survival level funding,” as described in testimony by the Justice Cabinet. There are currently just 838 troopers when at one point in history there were over 1,000. There are also significant equipment needs, including aging cars and weapons.

What appears to be additional funding for the state police in the governor’s budget is instead $34 million to cover additional required pension payments and $8.6 million for past sick leave costs that have not yet been paid. The budget proposal did include additional funding from the Kentucky Law Enforcement Foundation Program (KLEFP) to help some with equipment needs.

The Office of the State Medical Examiner plays an important role in law enforcement, public health, understanding child fatalities and fighting the opioid epidemic — and budget cuts over the years have resulted in reductions in these important services. Additional funds (not in the governor’s budget proposal) are needed to at least get the northern Kentucky office back up and running, which effectively has been closed due to the lack of monies needed to hire two positions. Without such an investment, the state is compromised in its ability to address the opioid epidemic as the medical examiner’s office investigates the exact cause of overdose deaths, among other important services.

The Department of Juvenile Justice (DJJ) has testified that the governor’s budget proposal  will require additional budget cuts on top of the cuts the department has already been facing. The department has implemented a hiring freeze, reduced staff training, and is experiencing continued high staff turnover due to the stress of inadequate staffing, forced overtime and low salaries. As the DJJ noted in recent testimony: “Staff shortages and turnover continue to escalate as youth workers are required to work OT and double shifts. Staff shortages in the facilities could lead to higher incidents, room confinements and unnecessary risk to the safety of youth and staff.”

The governor’s budget proposal does not provide sufficient funding for DJJ to continue the important juvenile justice reforms included in 2014 Senate Bill 200. If additional funding is not provided, DJJ will have to terminate its contracts with 19 day treatment programs, which work intensively with at-risk kids by providing counseling services and other supports. Without state funding, most school districts will likely close these programs.

The governor’s budget provides additional funds to corrections, but these funds are to address a projected increase in the state inmate population and the costs associated with reopening private prisons.  The additional funding does not address needed staff salary increases for correctional officers and probation and parole officers, or needed safety and security equipment for corrections staff.

As we look to the House budget proposal, it is important to understand that even with some additional investment in the governor’s budget Kentucky’s criminal justice system faces funding challenges.