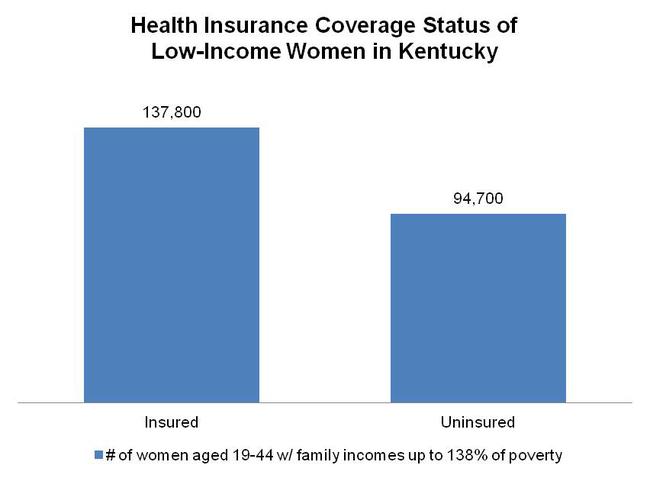 In Kentucky, nearly 41 percent of low-income women aged 19 to 44 are uninsured. However, if the state expands Medicaid through the Affordable Care Act (ACA), these women could gain coverage and improve their health and the health of their babies.

Currently Medicaid coverage for adults in Kentucky is very limited and leads to gaps in coverage for women.1 Many low-income women are eligible only while they are pregnant and for 60 days after they give birth.2

If Kentucky decides to expand Medicaid through the ACA in 2014, low-income women with incomes up to 138 percent of the federal poverty level would qualify for coverage. As shown in the chart below, that is nearly 95,000 uninsured women.

Gaining health coverage could improve the health of these women and their babies. As noted in a recent fact sheet released by the Center on Budget and Policy Priorities, research shows that when women have health coverage before becoming pregnant and between pregnancies, they are healthier during pregnancy—and their babies are more likely to be healthy at birth. According to the fact sheet, health coverage before pregnancy enables women to receive preventive care, participate in tobacco cessation programs and access substance abuse treatment and other services. And health coverage in between pregnancies provides women with access to care that can improve the outcomes of subsequent pregnancies—including treatment for diabetes and hypertension and clinical interventions to address family violence, depression and stress.3

Expanding Medicaid to include more low-income women could also end up reducing Medicaid costs. The state already covers the costs of delivery for many of these women; Medicaid pays for approximately 44 percent of births in Kentucky.4 Providing continuous Medicaid coverage—before and after pregnancy as well as during—could increase women’s access to family planning services and reduce state administrative costs associated with processing enrollment and disenrollment for women who have Medicaid coverage only when they are pregnant.5