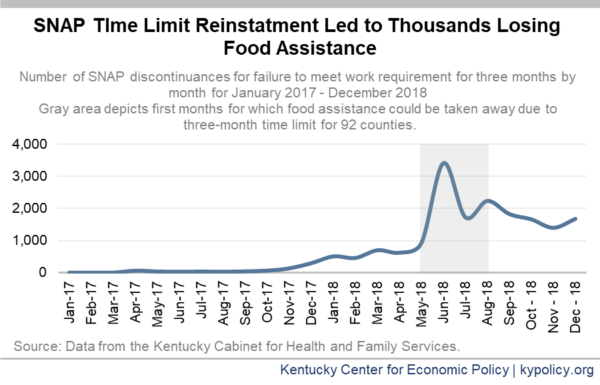 Click here for a PDF version of our full comments on  the U.S. Department of Agriculture’s February 1, 2019 Proposed Rule

The Supplemental Nutrition Assistance Program (SNAP) helps 566,900 Kentuckians put food on the table every month. Of that number, over 51,500 are non-disabled adults with no dependents, who have been required, under a federal law implemented in 1998 (known as PRWORA), to show that they are working at least 20 hours per week consistently for all but 3 months in any given 36 month span of time to keep their food benefits.1

The Kentucky Cabinet for Health and Family Services (CHFS) has always been able to waive this requirement for people living in certain areas experiencing economic hardship. Those criteria currently include:

Now, the U.S. Department of Agriculture (USDA) is requesting feedback on a proposal that would significantly restrict when and how states could waive this requirement for its residents in the future. The assertion offered is that the USDA should provide less flexibility to states in waiving this particular requirement in order to increase work participation. Accordingly, the department suggests several changes which include:

Cumulatively, the USDA predicts 755,000 Americans would lose food assistance under this battery of changes. Although nearly all of Kentucky’s waivers have been allowed to expire at this point, these proposed new restrictions would be harmful to low-income Kentucky adults without dependents during the next downturn, as state officials will have less flexibility to respond quickly to changes in the economy.3 In fact, according to an analysis from the Center on Budget and Policy Priorities, under the current rules for SNAP waivers, 117 out of Kentucky’s 120 counties could be waived if the state so chose. Under the new rules only 25 counties would be eligible for a waiver.4 Kentucky’s experience with allowing 92 county waivers to expire over the course of four months serves as an example of how the requirement, inflexibly applied, causes hardship through lost food assistance – as the USDA proposed changes would do.

Kentucky has already let all but 8 of our 120 counties return to the three-month time limit. Since January of 2018, 17,100 adults without a disability or dependents have lost food assistance because they failed to adequately report work hours, and only 83 of those who lost SNAP benefits regained them after the fact. It is unclear whether the individuals who lost benefits failed to work enough hours, or whether they worked an adequate number of hours, but failed to report that work in a timely manner; Census data shows the majority of non-disabled adults with SNAP already work or are looking for work.5

Eight counties in Kentucky are still waived due to a SNAP Employment and Training (E&T) pilot program funded through the 2014 Farm Bill; this area is known as the Path 2 Promise (P2P) zone.6 In an analysis of these P2P counties the Urban Institute found the number of non-disabled adults without dependents receiving SNAP decreased by only 2 percent between January 2017 and September 2018. Nearby comparable counties with reinstated time limits saw the same population receiving SNAP benefits decrease by 44 percent over the same period.7 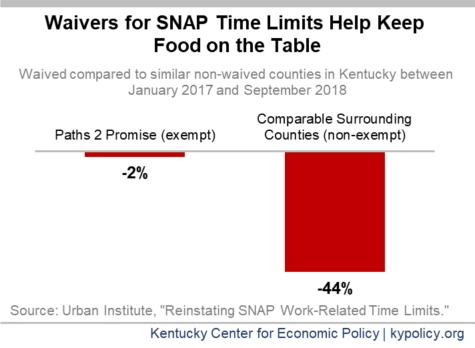 When comparing the same group of similar counties used by the Urban Institute (where SNAP waivers expired in 2018) to the P2P counties (where SNAP work requirement waivers remain in place), there was no meaningful distinction in employment growth during 2018. Using December 2017 as the benchmark month, prior to the beginning of waiver expirations, total monthly employment changes tracked very closely throughout the year between the two cohorts, ending in virtually the same decline in jobs over the year. This data suggests allowing waivers to expire likely had no observable effect on the number of jobs or employment, even while 44 percent of participants in the non P2P counties lost food assistance. 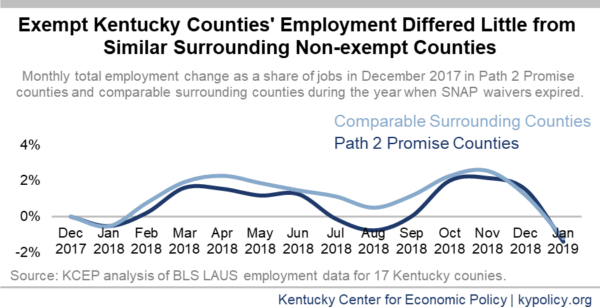 If SNAP participants cannot find work, they are allowed to fulfill the requisite hours by participating in a state-sponsored E&T program, which is meant to help build job-related skills. However, Kentucky’s SNAP E&T program is nascent, and the capacity is extremely limited, having only been able to serve 153 people as of July 2018. This lack of training availability makes it even more likely that a non-disabled adult without dependents in a county without a waiver will lose food assistance.8

When Kentuckians lose food assistance for failure to report their work hours as required by federal law, the harm disproportionately falls on Kentuckians of color and younger Kentuckians. This is already problematic, but the proposed rule would exacerbate the issue. 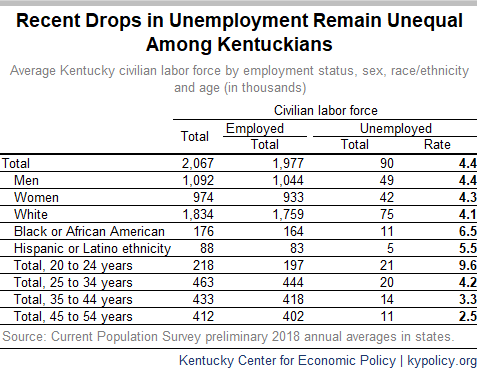 For communities of color in Kentucky especially, further restricting the criteria for waiving counties’ work-reporting requirement would be a hardship. Historic, structural barriers to stable employment, coupled with outright racially discriminatory hiring practices make finding a job far more difficult for black and Hispanic/Latino Kentuckians than white Kentuckians. As previously mentioned, the USDA proposed rule does not change this reality, it just makes it worse when, during the next downturn, the rule would make justifying a waiver of the time limit more difficult. The USDA could address these issues by allowing states to waive sub-county areas based on census data or other labor statistics, where unemployment rates are much higher due to racial segregation.

The USDA Should Not Approve this Rule, but Should Instead Work to Ensure Food Assistance Is Readily Available When Needed

For over half a million Kentuckians, nearly 1 in 10 being non-disabled adults without dependents, SNAP is a lifeline when times are tough. Assistance in buying groceries for low wage-earning families not only helps them to get back on their feet, but it is good for their health, and supports local economies.10 Making it harder for states like Kentucky to waive the requirements for counties experiencing economic difficulties is counterproductive to these goals. We urge the USDA to forgo this rule and work to make food assistance widely available to all people from low-income households.

[1] Data on non-disabled adults without dependents who are subject to the time limit from the Kentucky Cabinet for Health and Family Services through an Open Records Request dated March 12, 2019.

[4] Analysis provided by Catlin Nchako from the Center on Budget and Policy Priorities in an email to Jason Dunn from the Kentucky Voices for Health dated April 1, 2019.

[5] Data from the 2017 ACS 1 year estimates for Kentuckians age 19-49 who do not report having a disability or a related child present in the family.

Steven Carlson, Dorothy Rosenbaum and Brynne Keith-Jennings, “Who are the Low-Income Childless Adults Facing the Loss of SNAP in 2016?” Center on Budget and Policy Priorities, February 8, 2016, https://www.cbpp.org/research/food-assistance/who-are-the-low-income-childless-adults-facing-the-loss-of-snap-in-2016.