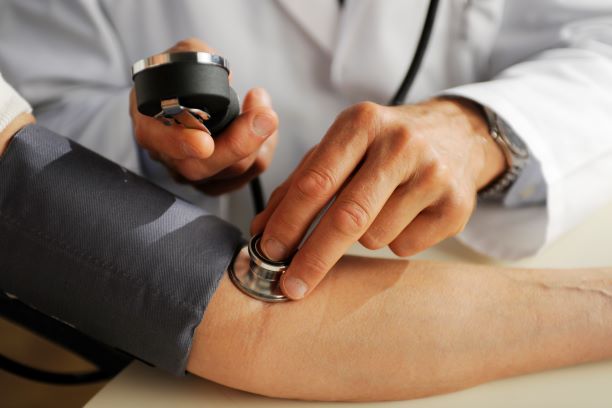 In 2019, before the COVID-19 health and economic crisis began, the share of Kentuckians without health insurance rose for the third year in a row, new Census data released today shows. The share of Kentuckians who were uninsured in 2019 increased from 5.6% the year before to 6.4%, limiting the commonwealth’s readiness for the pandemic. After dramatic coverage gains thanks to the Affordable Care Act, the state was moving backward due to a variety of state and federal policy actions that created barriers to coverage.

At 6.4% of the state going without coverage, 2019 had the highest rate of uninsured Kentuckians since the year Medicaid eligibility was expanded. 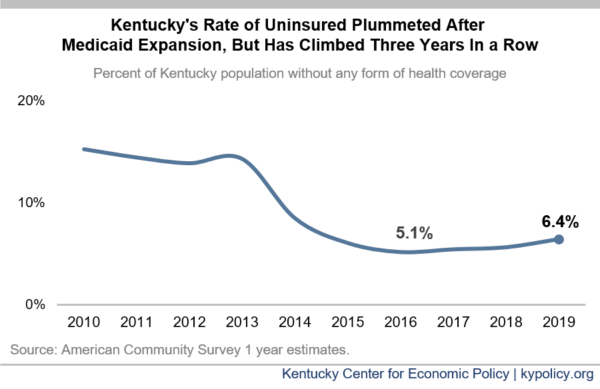 Recent measures taken by the Beshear administration are beginning to restore that progress by removing coverage barriers and creating new initiatives to improve access. But without robust federal relief – including through enhanced Medicaid funding – Kentucky could face more threats to health and our economy, especially in the most vulnerable communities.

After the ACA, Kentucky had more success than nearly any other state in reducing the share of people without insurance. But in recent years, health insurance gains have been eroding. Between 2016 and 2018, the uninsured rate in Kentucky increased from 5.1% to 5.6% before rising again last year to 6.4%.

“When you don’t have coverage, you don’t get care. That’s always bad for individuals and their families, and it’s bad for our economy too,” Kentucky Center for Economic Policy Senior Policy Analyst, Dustin Pugel said. “But the pandemic makes coverage that much more critical to saving lives, protecting health and preserving the jobs that come from keeping people covered.”

The state and federal “unwelcome mat” approach to Medicaid coverage in recent years – policy and administrative choices thwarting access to Medicaid for low-income Americans and Kentuckians – is a contributor of the recent uptick in uninsured rates. Federal cuts to marketing, outreach and enrollment, Governor Bevin’s repeated attempts to put up barriers to coverage for 100,000 Kentuckians (which Governor Beshear rescinded in December of 2019) and the Trump Administration’s Public Charge rule change are examples of policies that have led to lower rates of coverage.

Private health care has also become less affordable because Congress repealed the individual mandate in 2017 and rule changes at the federal level have allowed for “skimpy” short-term, limited duration health plans and association health plans – all of which pull healthy people out of the marketplace, making coverage more expensive for everyone else. For plans offered on the marketplace in 2021, rates will increase by 4% and 5.7% for the two health insurance companies providing coverage options in Kentucky.

Lacking health insurance is particularly dangerous for Black Kentuckians given higher rates of infection and death from COVID-19 due to historical, structural barriers to economic security and well-being. So far 13% of deaths in Kentucky due to COVID-19 were Black Kentuckians despite just 8.5% of the state’s population being Black.

This summer, Governor Beshear committed to ensuring all Black Kentuckians are covered by health insurance, which would help address the immediate crisis revealed by the pandemic. By expanding outreach, easing enrollment and making coverage more affordable, such an effort could also help pave the way for more Kentuckians of all races to become insured.

A range of positive administrative changes by the state have led to increased Medicaid enrollment during the pandemic, including aggressive state outreach and marketing, the state adopting a broad presumptive eligibility option as the first doorway into Medicaid, and additional federal Medicaid funds contingent on a moratorium from kicking people off based on income. Governor Beshear has also announced he will bring back kynect, Kentucky’s successful state-based health insurance marketplace, which will open opportunities to offer affordable coverage to more Kentuckians.

Time will tell how the pandemic and these measures impact Kentucky’s uninsured rate, but enrollment data shows Kentucky has been a leader in covering people in the pandemic. State efforts have contributed to 226,000 recently laid-off Kentuckians getting signed up for Medicaid.

But the additional associated costs of Medicaid, in the context of deep anticipated state revenue shortfalls, are setting up the potential for state budget pressures that may further hinder coverage. Inadequate federal aid could increase pressure on states to cut Medicaid. That problem is easily solved with responsible federal action, just as Congress took during the Great Recession. The U.S. House-passed HEROES Act would have increased the share of federal spending on Medicaid – the Federal Medical Assistance Percentage (FMAP) – by 7.8 percentage points through July of 2021 and extended the Families First increase of 6.2 percentage points by 6 months. But the Senate has not yet agreed to the necessary additional federal assistance for states and the Medicaid program.

“As the pandemic rages on and more temporary layoffs in the recession become permanent, we must protect Kentuckians’ ability to get the medical care they need without going broke,” said Pugel. “If Congress leaves states with inadequate Medicaid support that ends too soon, they are putting families and economies at risk. Adjourning this month without passing a strong aid package is not an option.”