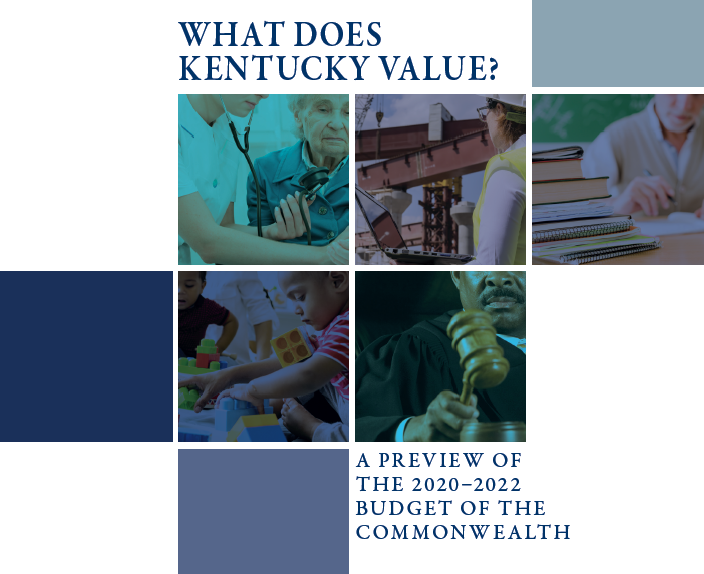 State investments already hampered by over a decade of budget reductions are likely to face additional cuts unless new revenue is put on the table in the 2020 legislative session, according to a comprehensive budget preview report authored by the Kentucky Center for Economic Policy (KCEP).

The new 65-page report, What Does Kentucky Value? A Preview of the 2020-2022 Budget of the Commonwealth, is a detailed compilation of the budgetary challenges faced by state agencies and educational institutions providing vital services with diminished resources. The report also describes why revenue growth continues to be weak, including because of substantial tax cuts passed for corporations, banks and wealthy individuals in the 2018 and 2019 sessions of the General Assembly.

“Kentucky’s budget is the primary policy document of the commonwealth, establishing how the state lives out shared values,” KCEP Executive Director Jason Bailey said. “Yet while many states have come out of the Great Recession and begun restoring funding in key areas, Kentucky continues to cut — and is likely to cut more in 2020 unless leaders embrace raising new revenue.”

The report explores the issues facing the Governor and the General Assembly as they craft a new two-year budget — from both side of the ledger:

The budget enacted two years ago contained the 20th round of budget cuts since 2008. Additional costs in the next biennium — including due to harmfully high rates of incarceration, changes to pension assumptions and because of inflation — will leave little to none of the anticipated revenue to fill deep budget holes in human services, education, mental health and many other areas that have widened over the years.

The report also outlines the important role the state budget plays in addressing racial, regional and economic disparities — and how a weakened state budget lowers quality of life for all Kentuckians.

“Through investments ranging from schools to infrastructure to health, the budget helps created the conditions in which Kentuckians either prosper together or struggle to access opportunity,” Bailey said. “But unless we look at cleaning up the tax code and generating new revenue, we are likely to see another budget in which disinvestment in important areas continues.”

The report can be found here: What Does Kentucky Value? A Preview of the 2020-2022 Budget of the Commonwealth