One of the key questions about how charter school legislation would change education in Kentucky is how it would affect funding for traditional public schools. Looking at what has occurred in other states and how HB 103 proposes to fund charters, there are reasons for concern.

It might sound like adopting public charter schools would mean no harm to resources — traditional public schools would lose students to charter schools but would no longer bear the costs of educating them. But that’s not the case. As noted in a recent Economic Policy Institute (EPI) report, research shows charter schools often have negative fiscal impacts on traditional public school districts in large part because it is not possible for them to reduce costs on a student-by-student basis. This is of particular concern in our state as Kentucky schools — especially poorer school districts — are already struggling financially. A recent report ranked Kentucky third worst in the country when it comes to per-student cuts to state formula funding for K-12 between 2008 and 2017.

More On Education: Public Resources Should Stay in Public Schools

These negative impacts occur through a number of channels.

There are many examples of charter schools hurting funding for traditional public schools.

Some concerns about funding in HB 103 specifically are: 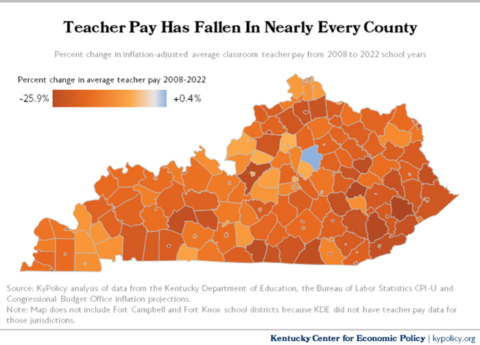