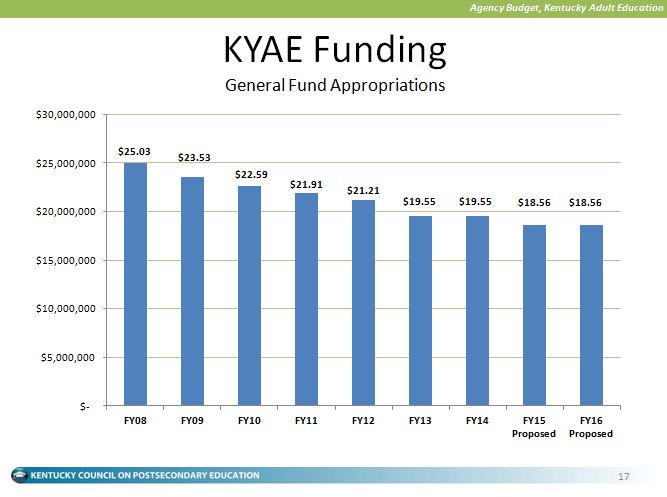 Each year Kentucky Adult Education (KYAE) helps thousands of Kentuckians across the state prepare to take the GED, improve literacy and increase English as a second language skills. These services have made important contributions to Kentucky’s gains in educational attainment. But a proposed 5 percent cut in the governor’s budget on top of six previous years of budget cuts could limit further progress.

In 2012-2013, nearly 38,000 Kentuckians participated in adult education. Services are free for those who qualify (although there is a fee associated with taking the GED test) and are offered in every Kentucky county by providers that include community colleges, public universities, local school boards, education co-ops and community based organizations. In addition to classes held at these locations, adult education is provided in some workplaces and also local jails, halfway houses and state correctional institutions.

Investment in the state’s adult education efforts is critical to moving Kentucky forward. Those with a high school credential earn around $9,400 more per year than those without, and for many Kentuckians, earning a GED—or improving literacy or English as a second language skills—is a first step toward higher education. One estimate says that 62 percent of jobs in Kentucky will require some postsecondary education in 2020. And studies have shown that those with at least a postsecondary credential and a year of college credit earn substantially more than those with less education.

Yet Kentucky’s educational attainment rates still lag behind most other states. Just 31.7 percent of adults 25-54 in Kentucky have an associate’s degree or higher, ranking the state fifth from the bottom on this measure.1

Recognition that the state’s low levels of educational attainment hold the state back led to the Adult Education Act of 2000, which increased funding for adult education at the time and established a partnership with the Council on Postsecondary Education.

Kentucky has been recognized as a leader in adult education due to its commitment to aligning adult education with postsecondary education. More and more GED recipients are attending college; 26 percent of Kentuckians who earned GEDs in 2011 enrolled in a Kentucky college or university within two years—compared to 21 percent of 2007’s GED graduates.3

However, there is much more progress to be made. There are more than 374,000 adults age 18-64 without a high school credential in Kentucky, and 54 percent of the state’s adults have either just basic or below basic literacy levels (ranking Kentucky 43rd on this measure).4

Budget cuts make it difficult to sustain and grow the momentum of the state’s recent gains in educational attainment. State funding for KYAE has been on the decline since 2008, and the governor’s proposed budget would cut adult education funds another 5 percent. These cuts are shown in the graph below.5

The budget cuts to KYAE have meant a decline in General Fund per student funding from $796 in 2008 to $516 in 2013. And these cuts are happening at the same time that the cost of taking the GED is doubling because a new version of the test is being implemented.

In many ways Kentucky has been a leader in adult education, but budget cuts may limit what KYAE can accomplish. Although the share of GED graduates enrolling in a Kentucky college or university within two academic years has grown, the number of GED graduates has declined—from 10,294 in 2010-2011 to 8,890 in 2012-2013.

In order to continue to improve the educational credentials of its workforce and the state’s economy, Kentucky needs greater investment in adult education—not more cuts.