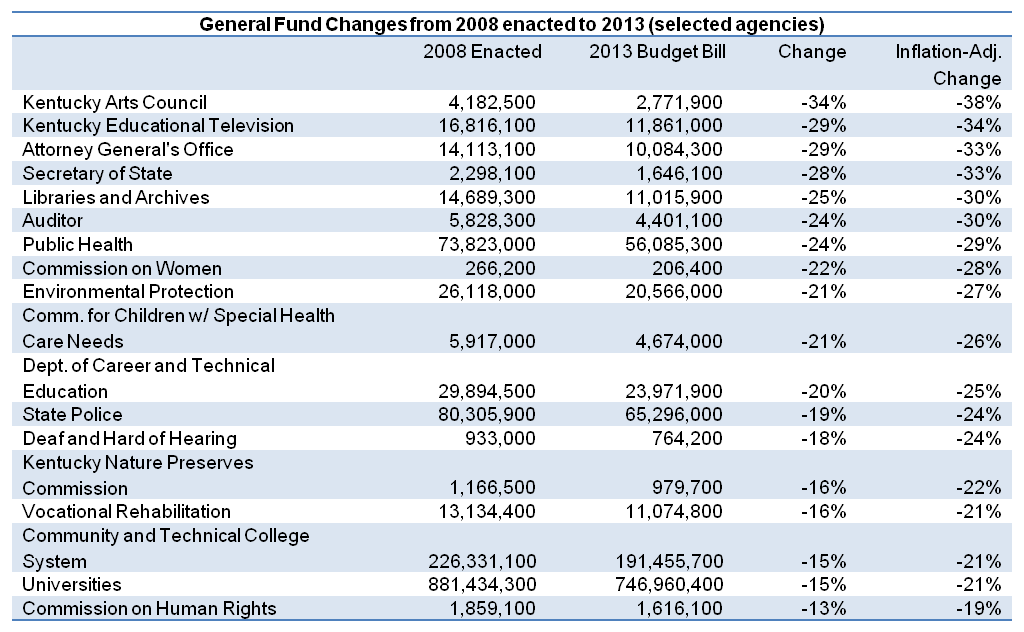 The 2012-2014 budget bill that passed both the House and Senate late last week is—like the budgets previously proposed this year by the Governor, House and Senate—based primarily on cuts. These cuts will further strain the state’s essential programs and services and prevent critical investments in Kentucky’s future.

The budget bill generally upholds the cuts to 2012 funding levels made in the Governor’s budget, which include:

The cumulative impact on some of the state’s basic services—and on Kentuckians who rely on them—would be substantial. These cuts are on top of ten previous rounds of budget cuts. Figure 1 describes funding decreases from 2008 to 2013 for a select set of agencies and services in the budget bill; these cuts are also inflation-adjusted to November 2011 prices.

Most agencies that are not cut receive flat-lined funding or only small increases in funding:

Although these agencies are not currently facing cuts, for most the funding levels are still far below those of 2008.

The budget bill includes no raises for state employees and no cost of living adjustments for retirees. The bill also does not fund the additional preschool slots proposed by the Governor for children from households with incomes up to 160 percent of poverty. 600 new slots are proposed for Supports for Community Living over the biennium, to move people into community-based rather than institutional settings, but this is 200 fewer than in the Governor’s budget.

The budget passed by the legislature is woefully inadequate to meet the needs of Kentuckians and to move the state forward. This budget does not make necessary investments in education and other critical areas. And the state’s revenue situation is not expected to improve much over the next few years. Kentucky must take action to raise additional revenue through tax reform so that we do not find ourselves in a similar situation in two years.