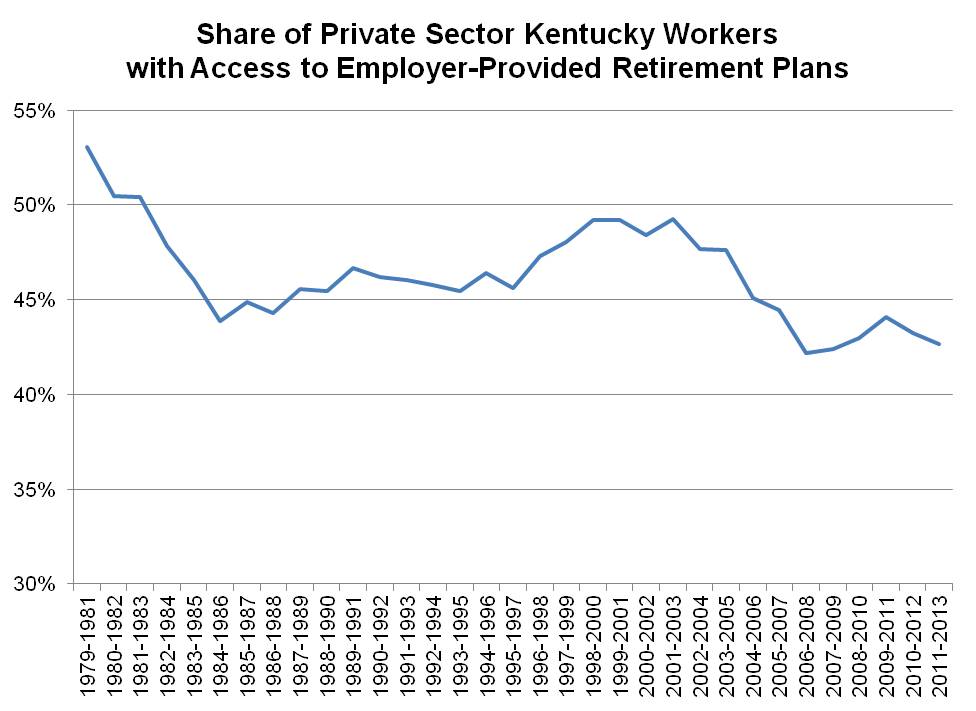 A concerning number of Americans are financially unprepared for retirement, and a contributing factor is that many lack a retirement plan offered through their jobs. But a bill in the Kentucky House of Representatives would help by providing a retirement savings option for the thousands of Kentuckians who work for small businesses that don’t currently offer a plan.

A financially secure retirement is often described as a three-legged stool:  retirees need Social Security, a pension plan and retirement savings to make ends meet in their later years. But too many people now approach retirement counting on Social Security and little else. In Kentucky the median household income for those over age 65 is only $33,000 a year according to Census data, and 30 percent of households bring in less than $20,000 annually.

One major reason is that less than half of workers have access to a retirement plan through their workplace, and the share has been declining since the early 2000s, as shown in the chart below for Kentucky. AARP reports that 787,000 Kentucky workers lack a job-related retirement plan.

Research indicates that people will save for retirement if given an option, particularly if several key features are included. Workers are much more likely to participate if they are automatically enrolled in a retirement plan rather than having to elect to join. They also are more likely to take part if the investment options are fairly limited and straightforward. And they’re more likely to retain their retirement savings if their plan is portable between jobs; otherwise, people often cash out plans when switching employment, and the average worker now has 11 jobs just by the age of 46.

House Bill 261 in the 2015 Kentucky General Assembly would help more workers at small businesses save for retirement by establishing a new state-wide plan called the Kentucky Retirement Account (KYRA). It’s based on a model that more than 20 state legislatures are considering this year. Similar legislation has been enacted in Massachusetts, California and Connecticut, and Illinois passed a law creating such a program in January.

HB 261 incorporates the best practice features mentioned above: it establishes a default employee contribution of three percent of salaries into accounts, although employees can choose to contribute a different amount or opt out entirely; it provides a portable benefit that employees can take between jobs; and it offers a simple default investment option based on a worker’s age.

The new plan would be available at no risk to employers, who must simply deduct contributions from employees’ paychecks and remit them to the plan to participate. The plan could help small businesses attract and retain skilled employees that they would otherwise lose to large employers who are better able to provide a retirement plan.

By offering a program state-wide, KYRA can achieve economies of scale across many small businesses and therefore keep administrative costs low. HB 261, which has no fiscal cost to the state, would establish a board connected to the State Treasurer that would contract with a private vendor to manage the program, similar to the state’s existing deferred compensation plan for public employees.

The lack of retirement savings and the decline of traditional defined benefit pensions make for a growing crisis in retirement security in the coming decades. HB 261 is one step Kentucky could make to help address the challenge.