House Bill 12 is a much-needed bill to help reduce insulin costs for some of the 442,500 Kentuckians with diabetes. Under the bill, cost sharing for insulin could not exceed $100 per 30-day supply of any kind of insulin.

Insulin costs have been steadily climbing

Although a very commonly prescribed medication, insulin prices have been growing rapidly in recent years, and are out of reach for many people with diabetes. Between 2012 and 2016, insulin prices at the point of sale more than doubled in Kentucky, growing from $352 to $721 for a 30-day supply. This rapid growth is happening across the nation due to conditions in the pharmaceutical industry such as minimal competition in the insulin manufacturers’ market, the ongoing generation of new formulations of insulin and high, sustained demand for diabetes medication. 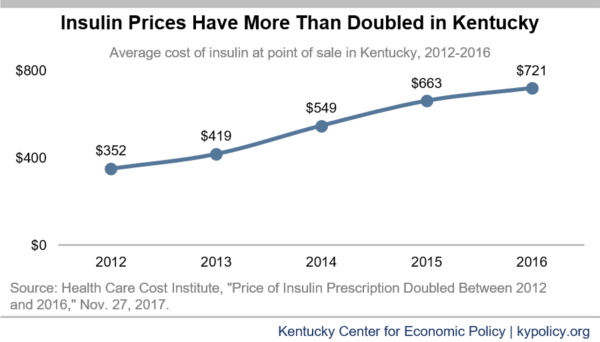 House Bill 12 addresses this rise in pricing by limiting out-of-pocket costs, which is important as nearly 1 in 3 covered Kentucky adults have plans that require large cost-sharing on behalf of the insured. All privately insured Kentuckians who purchase insulin pay some share of the price at the drug store because their insurance requires them to meet a deductible, pay a co-pay, cover a fixed percentage of the cost through co-insurance, or some combination of these. Often, patients’ share of the cost is higher at the beginning of the year, when their deductibles and out-of-pocket maximums have not been met, and lower toward the end of the year. This is especially true for the 29% of insured adults who have a high deductible health plan, who paid $126 per month out-of-pocket on average for insulin in 2017, more than double what other covered adults spent that year on insulin ($61). 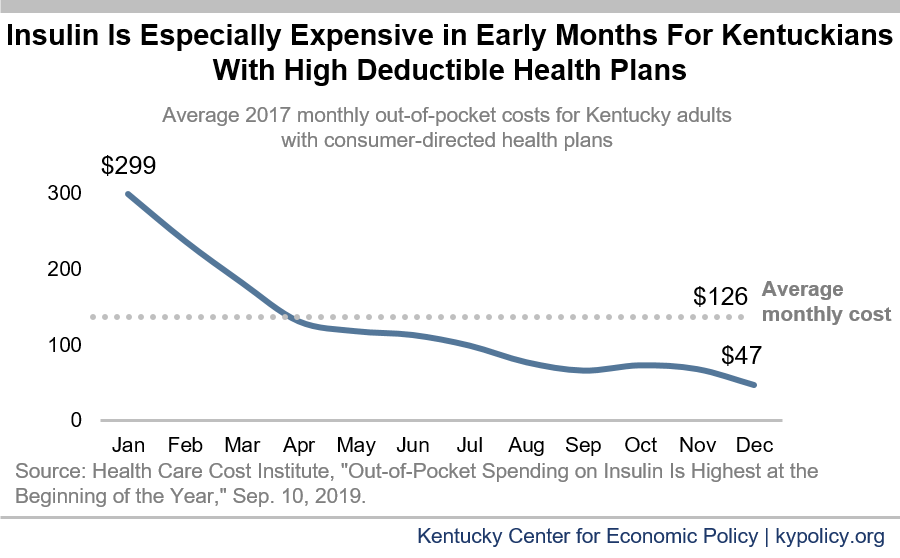 The rising cost of insulin has led many to ration diabetes-related medicines rather than taking them as prescribed. Research from the Centers for Disease Control and Prevention shows that roughly 1 in 7 adults under 65 who are diagnosed with diabetes skipped doses, took less of their diabetes medicine or delayed filling a prescription in order to save on costs. This can create costly complications for their chronic disease and consequences to their health including an increased risk for kidney disease, blindness, loss of limbs or even death. For uninsured adults, 1 in 3 tried to cut costs through one or more of these strategies, often to pay medical bills and other competing costs.

Number of Kentuckians with diabetes has doubled over past decade, and many struggle to afford insulin

Kentucky has the 4th-highest mortality rate due to diabetes in the nation. In addition to the 442,500 Kentuckians with diagnosed diabetes (the 7th-highest incidence rate of diabetes among states), it is estimated that an additional 147,500 adults have diabetes but don’t know it because it has gone undiagnosed. Due to a variety of structural barriers and racial inequities, black Kentuckians face higher rates of both prevalence (14.5%) and mortality (37.9 per 100,000) from diabetes than white Kentuckians (13.3% and 19.7 per 100,000 respectively) according to the Kentucky Minority Health Status Report.

In 2017, Kentuckians spent an estimated $367.8 million on over 10,000 hospitalizations due to diabetes. Diabetes-related hospitalizations are the 3rd most expensive among chronic diseases in Kentucky. But the overall cost of diabetes in Kentucky is far higher — $5.2 billion in medical costs, lost wages, lower productivity and other direct and indirect economic factors as of 2017.

Ensuring people can access health care for early detection and treatment of diabetes as well as healthy foods and places to exercise can lessen the detrimental impact of diabetes on mortality and health care costs. At the same time, lowering the out-of-pocket cost of insulin is critical to ensure Kentuckians don’t need to skip treatments, and can still afford other basic needs.