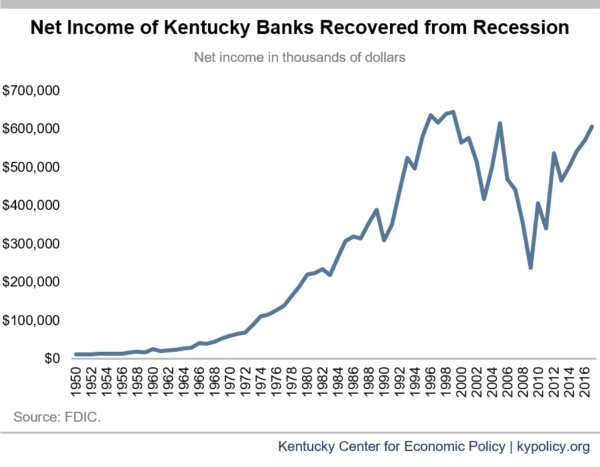 With just 3 days left of the 2019 General Assembly before the veto recess, now is the time to be concerned about the appearance of last-minute legislation to benefit special interests. One area of concern involves the idea of repealing Kentucky’s bank franchise tax in favor of taxing banks under the corporate income tax, an idea being floated by the Kentucky Bankers Association (KBA).

A bill has not been introduced to make this change and no fiscal note outlining its cost to the state exists. Though it is therefore impossible to critique the specifics of this proposal, it is expected to significantly reduce the amount of taxes banks pay at a time when Kentucky is already dealing with round after round of budget cuts, large pension costs and more. The bank franchise tax generated $116 million in 2018 for the General Fund.

Despite a significant revenue loss that would result, there are troubling signs that language to make these dramatic changes to the way banks are taxed may be included in House Bill 354. That legislation was intended originally to address only the taxing of nonprofit fundraising events, but has since become a potential vehicle for a variety of new tax breaks. A page of the KBA website includes a call to action on this issue, and states that “we have been told, again, we would be in the tax cleanup bill.”

A proposed change as fiscally important as this one deserves significant time, attention and public discourse. The advocates for this proposal have been lobbying legislators behind closed doors, and the lack of a specific bill prevents the necessary public scrutiny and debate.

Advocates for the proposal have spoken in generalities and painted a dire picture for the banking industry in Kentucky if the tax structure is not changed. Yet Federal Deposit Insurance Corporation (FDIC) reports show Kentucky bank profits were over $600 million in 2017 and have recovered from the Great Recession. No previous state tax reform commission or study has proposed changing the way we tax banks.

A complete change to bank taxes further dirties up the tax code, and doing so in the darkness of the final days of the session would be more of the process that has made so many people cynical about Frankfort. Legislators should keep the cleanup bill clean. Any discussion of how we should approach taxing banks in Kentucky should happen in the full light of day with the time and opportunity for public input and feedback about its impacts on the commonwealth.