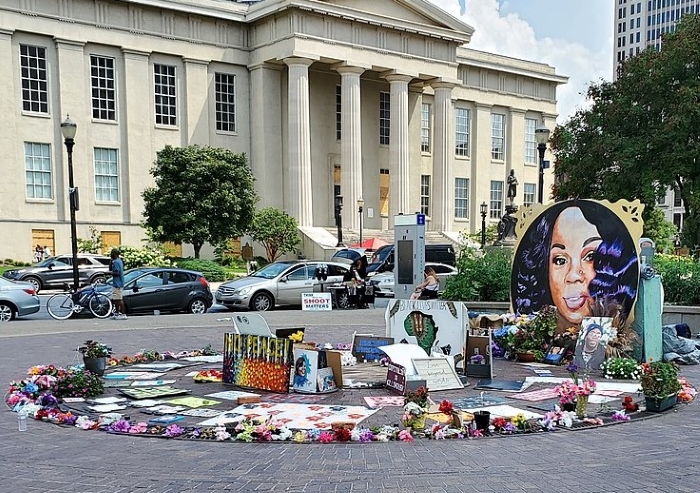 Since the killing of Breonna Taylor by police in March during a drug investigation, public officials, community organizations and advocates have called for bans of “no-knock” warrants, which have become a major focus due to the use of such a warrant by the police officers who entered Taylor’s home. As initially conceived, no-knock warrants were intended for high-risk scenarios where lives were in danger such as hostage situations or to apprehend snipers. However, since their inception as part of the increased militarization of policing units in the mid-20th century, they have most commonly been used for low-level drug searches where the primary and immediate goal is to secure evidence, not to save lives.

In fact, rather than saving lives, no-knock raids are a violent practice with racist roots and outcomes that frequently result in the injury or death of people whose homes are invaded, including many individuals entirely innocent of a crime (as was the case with Taylor). Rather than saving lives and preventing violence, as originally intended, no-knock raids have instead become one of the primary vehicles leading to injury and death under the guise of law enforcement. Kentucky should ban the issuance of no-knock warrants, as well as all other types of forced-entry police raids as a step towards demilitarization of local police forces.

What is a no-knock warrant?

A no-knock warrant authorizes police officers to enter a premises without first knocking and announcing their presence or purpose. These types of warrants are intended for use in circumstances when the common practice of knocking, announcing and waiting prior to entry could result in the destruction of evidence or compromise the safety of officers or others (also known as exigent circumstances). Since their inception, no-knock warrants have been the subject of controversy and legal challenges under the Fourth Amendment’s protection against “unreasonable searches and seizure.” In the 1963 case Ker v. California, the Supreme Court set a precedent for allowing “forced” police entries in drug searches. However, it was the 1995 Supreme Court case of Wilson v. Arkansas that established that unannounced forced police entries may be legally permissible and not in violation of the fourth amendment in situations where announcement could risk harm to police or evidence being destroyed (although the legalities behind no-knock warrants continued to be raised in subsequent cases).

No-knock warrants originated from the militarization of local policing with the development of Special Weapons and Tactics Teams (SWAT) in the Los Angeles Police Department (LAPD). While the stated purpose for establishment of the unit was as a tactic for dealing with high-risk situations (snipers, hostage incidents, etc.), in practice, SWAT teams were deployed from the beginning for other situations that were not high-risk. The first major SWAT raid (both in the US and in the world) occurred on Dec. 8, 1969, when a SWAT team raided the Black Panther Party headquarters in Los Angeles. While the raid resulted in 13 arrests and 72 criminal charges filed against Black Panther members, nearly all defendants were found not guilty of charges. Even now, no-knock and knock-and-announce searches are disproportionately directed at Black and Latino people and communities. As described in a recent piece by ACLU policy strategist Keturah Herron, in the data available, Black people and predominantly Black communities are overrepresented in SWAT searches both nationally and in Louisville.

Despite the lack of “success” of early raids in addressing high-risk situations, improving community safety or even leading to convictions among accused suspects, these raids gave birth to the Police Paramilitary Model (and proliferation over time of SWAT teams across the country). This model resulted in the development of specialized units trained to function as military special operations teams: dressed in special uniforms including camouflage, body armor, and Kevlar helmets; armed with specialized weaponry like grenades, submachine guns and sniper rifles; and directed to use force tactics like no-knock raids. The funding for acquiring such equipment is provided by the federal government through programs such as the 1033 program that transfers military equipment from the Department of Defense to local law enforcement agencies. The model also normalized the use of these teams and tactics in a variety of situations where the team is a proactive aggressor, rather than being reserved for deployment in limited situations where an immediate, reactive, coordinated response is required.

The implementation of no-knock raids grew during the Nixon administration to fight the so-called “War on Drugs,” a campaign launched in 1971 after decades of growing public and political anti-drug sentiments, which resulted in a dramatic expansion of incarceration in the United States. Incarceration for nonviolent drug offenses alone went from 50,000 to 400,000 between 1980 and 1997, and in 2020, an estimated 450,000 people are incarcerated in local jails, youth detention centers, or state and federal prison for a drug offense (including 46% of the over 144,000 people incarcerated in federal prison). The so-called War on Drugs was largely targeted at Black and Latino communities through methods like sentencing disparities between crack and cocaine, and racist ramifications of the so-called War on Drugs still persist today. Black people are overrepresented in cannabis arrests due to overpolicing of Black people and communities, despite comparable usage among Black and white individuals. Furthermore, in 2016, 56% of individuals in prison for a drug conviction were African American or Latino.

The use of no-knock raids was controversial from the beginning because of botched and mistaken drug raids across the country (as well as because the policy sentiment early on was actually focused more on a public health-focused response than a criminal one). In response, congressional hearings were held, and the federal no-knock law was subsequently repealed. However, no-knock warrants resurged in the mid-to-late 1980s coinciding with the Anti-Drug Abuse Act passed in 1986, which established mandatory minimums for certain drug offenses. Law enforcement agencies began increasingly using no-knock raids and their closely related counterparts, “quick-knock” raids, which require that law enforcement knock and announce themselves before entering.

Data on no-knock and quick-knock raids is very difficult to obtain, but according to one 2018 analysis, only 5% of SWAT raids are carried out for high-risk “barricade” scenarios, and nearly 90% are carried out to execute searches. In another report from the American Civil Liberties Union analyzing SWAT deployments, 62% of no-knock and quick-knock raids performed across 800 deployments were performed to obtain drugs. In that same report, 36% of the raids reportedly resulted in no discovery of drugs (35% reportedly did, and 29% had no information on whether any drugs or items were seized). While we don’t have complete data on raids, what data we have shows that most deployments are used for drug-related investigations.

The data we have on no-knock and quick-knock raids shows that these raids often end in violence. A New York Times investigation examining data from 2010 through 2016 found that 81 civilians and 13 law enforcement officers were killed in both no-knock and knock-and-announce raids during that time. Breonna Taylor’s killing unfortunately is among many instances of tragic killings resulting from no-knock raids. Other victims include:

An estimated 44% of Americans live in a household with a gun. That fact, plus the growth in the number of states (including Kentucky) with “Stand Your Ground” laws allowing individuals who are being attacked to “meet force with force,“ means that the opportunity for violent confrontations during no-knock raids is pervasive. Legal complexity and opportunities for successful civil liability settlements for victims and their families are also high in cases involving no-knock raids, a costly problem for cities. They pose a major, unnecessary safety risk to police officers as well. In a 2017 story about drug raids in the New York Times, Robert Chabali, a former SWAT member and retired assistant police chief stated, “If we are going to risk our lives, we risk them for a hostage, for a citizen, for a fellow officer. You definitely don’t go in and risk your life for drugs.”

Research also indicates that there is very little accountability or oversight of the approval of no-knock warrants, meaning that police officers can easily request no-knocks for situations that do not warrant a no-knock response. While national and city-wide data on the issuance of no-knock warrants is not widely collected and reported, one analysis by the Denver Post found that judges rejected only 5 out of 163 no-knock warrant requests from Denver police in 2000. In addition, according to the Post’s analysis, about one-third of the executed no-knock raids did not get the required pre-approval from the district attorney. In another analysis, the Washington Post found that between 2016 and 2018, in Little Rock, Arkansas, judges approved 103 of 105 no-knock warrants requested by police.

The Kentucky General Assembly should ultimately ban outright the practice of forced-entry police raids, including no-knock and quick-knock raids. They are high risk and frequently result in violence against individuals in situations where such tactics are egregious and unnecessary, especially given their use in drug-related cases and movement in states toward decriminalizing or legalizing certain forms of drugs. Kentucky has an opportunity to be a national leader by banning forced-entry police raids entirely (except in active shooter, hostage and terrorist situations only — the situations that raids were originally intended for).

A no-knock warrant ban would be a positive first step, but more will ultimately be needed to address the broader violence resulting from forced-entry police and SWAT raids. For instance, given the dispute over the legality of the no-knock warrant in the Taylor case, it’s not clear a no-knock warrant ban would have prevented her death. In practice, many knock-and-announce search warrants can be and are executed as quick-knock search warrants because the announcement and/or knock of police presence occurs simultaneously with the breaching of the residence. While the mandating of bodycams is frequently suggested as a way to provide accountability, recorded footage often isn’t enough to hold police officers accountable for breaking rules and laws, nor will it rectify a situation where someone was unjustly killed or permanently injured during a raid.

Outside fuller reforms, Kentucky should build on momentum and join other states advancing no-knock warrant bans. According to the National Conference of State Legislatures’ State Bill Tracking Database, seven states have introduced bills related to search warrants since May 2020. In October 2020, Virginia became the third state in the US to implement a statewide ban on no-knock warrants, and the first to do so since the killing of Breonna Taylor (Florida and Oregon are the other two states that also have bans). Members of the Kentucky General Assembly have already expressed interest in addressing no-knock warrants. A bill to ban no-knock warrants has been prefiled, and other bills are expected related to no-knocks and other aspects of demilitarization.

Municipalities have also taken steps to reform no-knock warrant procedures or ban them outright. No-knock warrants were suspended in May 2020 by Louisville Mayor Fischer as an immediate response to Taylor’s killing. In June 2020, a measure to ban “no-knock” warrants, known as “Breonna’s Law,” was unanimously passed by the Louisville Metro Council. Police officers are also required to wear active body cameras as a result of the law whenever they execute a warrant. Other examples include: