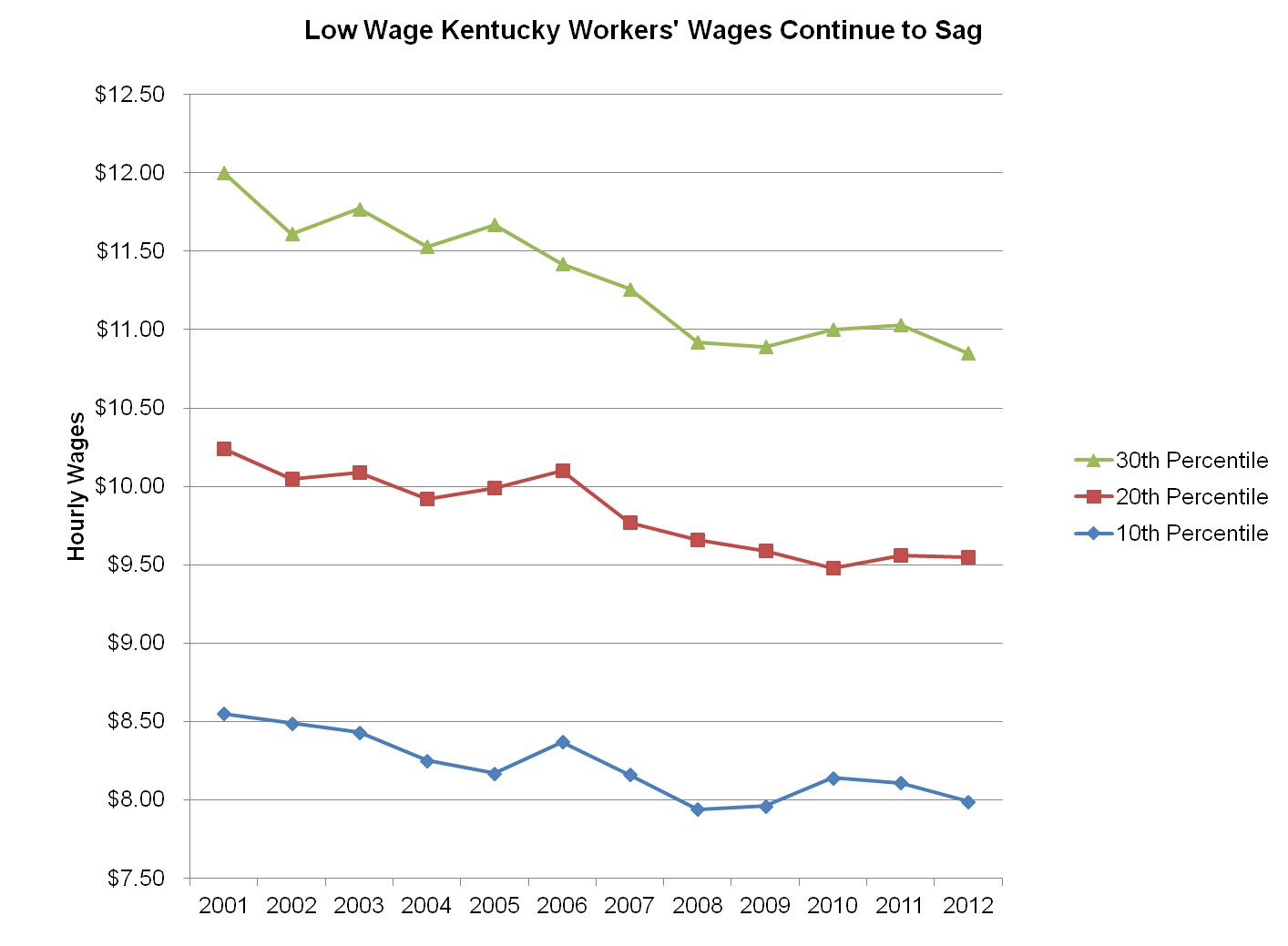 Real wages for Kentucky workers fell again last year, continuing a slide that began in 2001. Congress’ unwillingness to spur a stronger economic recovery and act on policies like raising the minimum wage play a big role in depressing wages.

Low wage Kentucky workers continue to see the real value of their wages erode. Inflation-adjusted wages for workers at the 10th percentile fell 1.5 percent in 2012—to $7.99 an hour—and have declined 6.5 percent since 2001. Likewise, workers at the 20th and 30th percentile have seen the purchasing power of their wages decrease over the last decade.

Kentucky workers at the median (where half of workers make higher wages, and half make lower) saw their wages fall 2.8 percent in real dollars in 2012. They’ve experienced a 7.1 percent decline since 2001.

The failure of federal action to spur faster economic growth is a big cause of wage losses. Continued high unemployment means there are still three job seekers for every job, putting little pressure on businesses to raise wages in order to attract workers. In contrast, unemployment was very low in the late 1990s and early 2000s and employers had to pay higher wages to compete for fewer available employees.

At the Consensus Forecasting Group meeting in Frankfort this week, the governor’s chief economist noted continued uncertainty about the economy because the “engine of economic growth is yet to be identified.” The three main engines of the economy are consumer spending (which is the biggest), government spending and business investment. Consumer spending is weak because without job and wage growth people don’t have money in their pockets to spend; cuts in government spending are harmful because they directly eliminate jobs; and businesses aren’t investing because they don’t see consumer demand for their products and services. What’s needed is more short-term federal investment to spur faster job growth.

Additionally, raising the federal minimum wage to $10.10 an hour, as Sen. Tom Harkin and others have proposed, would either directly or indirectly lift the wages of over one in four Kentucky workers. If the minimum wage had kept up with the average workers’ wage growth over the last four decades, it would be $10.50 an hour rather than $7.25. Decreases in unionization also play a big role in workers’ wage declines, as does the elimination of good-paying manufacturing jobs. While those jobs disappear, the new jobs being created tend to pay low wages.