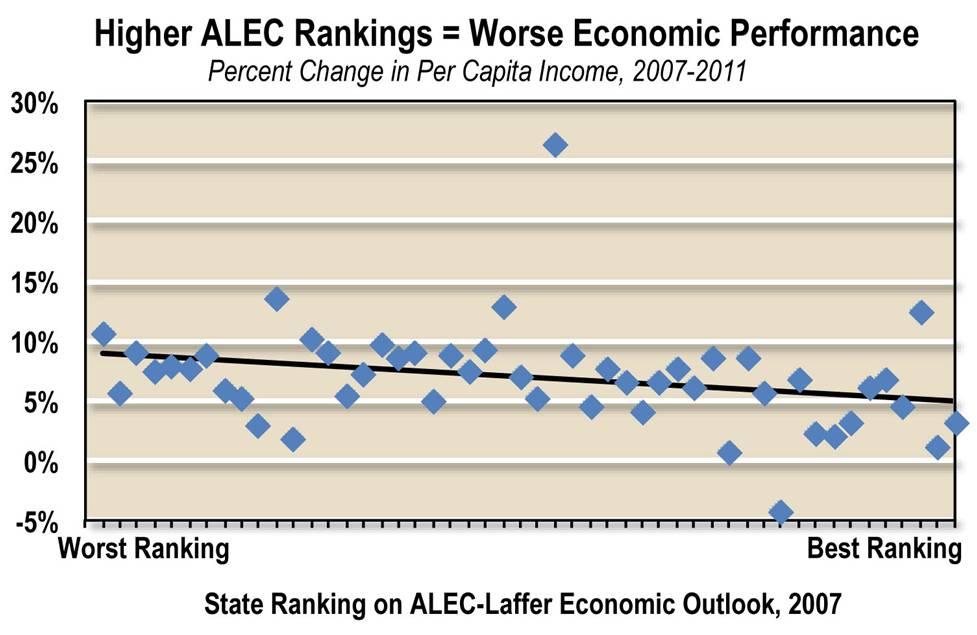 Hardly a month goes by without the release of another index supposedly ranking states on their economic competitiveness. One prominent such report comes from the American Legislative Exchange Council (ALEC), a controversial national corporate lobbying organization. But a new analysis by a University of Iowa economist shows that ALEC’s prescription of tax cuts for the wealthy and corporations, reductions in public services and curtailment of workers’ rights has no correlation with state prosperity.

Professor Peter Fisher, a leading expert on state economic development policy, looked at the economic performance of states five years after the release of ALEC’s first edition of its report Rich States, Poor States: The ALEC-Laffer State Economic Competitiveness Index. ALEC’s prescription for economic growth is for states to have no individual or corporate income tax, no estate tax, no state minimum wage, caps on taxes and spending, and “right-to-work” laws designed to limit unions.

Fisher’s analysis finds no correlation between ALEC’s policy prescriptions and the economic performance measures that the ALEC report relies on—growth in state gross domestic product, growth in nonfarm employment, and growth in per capita income. In fact, as shown in the graph below, the worse a state did on the ALEC index the better it actually performed in per capita income over this period.

Fisher concludes that ALEC’s policy proposals “are not a recipe for growth and prosperity. If anything, they are quite the opposite: They are a recipe for economic inequality, low wages, and stagnant incomes that at the same time deprive state and local governments of the revenue needed to maintain the public infrastructure and education systems that are the underpinnings of long term economic growth.”

Kentucky policymakers should be very wary of the indices touted by entities like ALEC and the Tax Foundation. They provide insight into a vision of the world these organizations would like to see realized, but fail to explain what it really takes to make a state’s economy grow.