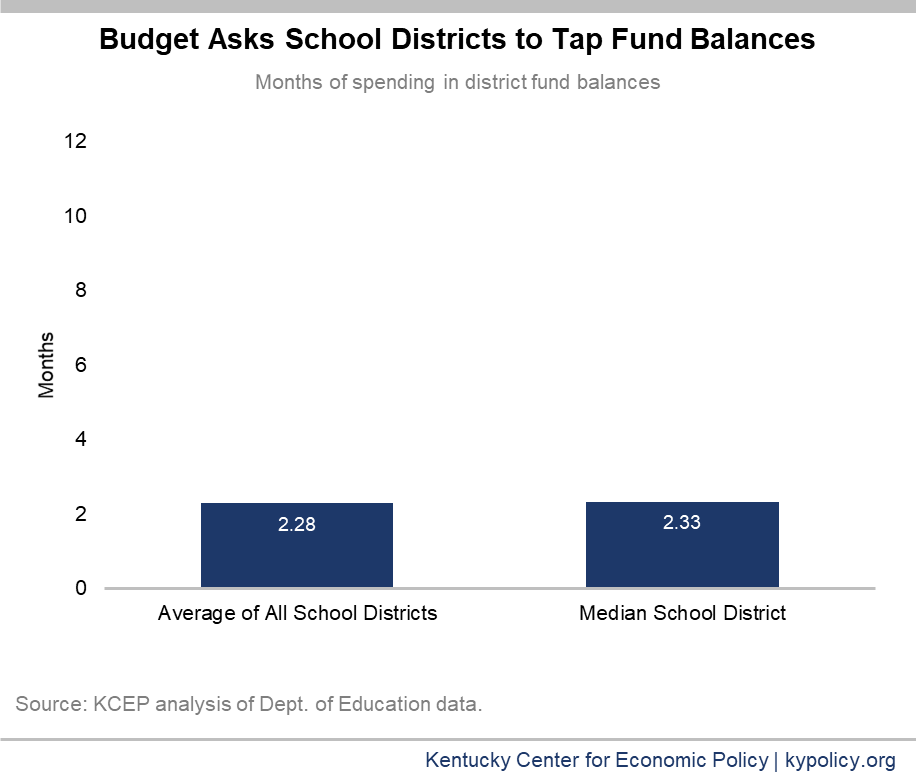 One of the ways the governor’s budget expects local school districts to make up for significant cuts he has proposed in state support for education, including transportation and teacher health insurance, is through spending down district reserves.  State law requires school districts to budget for a minimum reserve of at least two percent of the total school budget. However, districts that are able to retain balances greater than the statutory minimum because of sound financial practice, including needs for debt service coverage, bond trustee requirements and bonding capacity, credit rating, yearly cash flow, and the particular characteristics of the district, dictate that a larger balance is needed.

Best practices established by the Government Financial Officers Association (GFOA) generally recommend an unrestricted general fund balance of no less than two months of operating revenues or expenses.  GFOA also recommends the focus in determining the needed fund balance be on long-term forecasting, to avoid the risk of placing too much emphasis on the balance at any one time. In a 2010 study on school district fund balances, the Office of Education Accountability (OEA) recommended increasing the year-end statutory minimum balance to six percent, which is generally one month of expenses for a school district.

Despite these recommended best practices, and the determinations that have been made by individual districts regarding their long-term and emergency needs based on prudent fiscal management, the governor’s proposed budget includes language authorizing the Kentucky Department of Education to allow school districts to maintain a minimum reserve of less than 2 percent.
In the letter included in the 2018-2020 Budget in Brief, State Budget Director Chilton states:

…due to the severely limited state resources, financial support for student transportation and certain teacher related expenses is being reduced. Since many local school districts have reserve funds (the total reserve funds for all school districts is over $950 million), local school boards will need to satisfy these funding needs by using those reserves and perhaps tapping other fund sources.

It is both short-sighted and ill advised to put school districts in a situation where they are forced to spend down their reserves to meet ongoing expenses because reserves are needed for good, sound, fiscal reasons and are very difficult to replenish once they have been expended.  Forcing school districts to use these reserves would likely impact their credit ratings and bonding capacity and could leave a district with no resources should something unforeseen happen. To understand why inadequate reserves are problematic, it is important to know what is included in school district fund balances, and why school districts maintain fund balances in the first place.

What is included – The number cited by the budget director is the total general fund balance for school districts as of July 30, 2017. Within that balance, there are three different categories based on the degree to which funds are committed for future expenditure.

Of the $950 million referenced by the budget director, $219 million, or almost 30 percent of the balance, are in the committed or assigned funds category, which means the school district has identified a specific use for those funds. Even with a large portion of funds committed, the average and median balance for school districts is just a bit over 2 months, as illustrated in the graph below. Forcing districts to use these funds for operating expenses could and likely would require districts to ignore important capital and maintenance needs that they know about and have plans to address once enough has been saved.

Why Fund Balances are Necessary – Each school district is unique and the anticipated needs vary. But for most districts, the following factors come into play in determining a fiscally responsible balance that should be maintained:

In short, there is no “magic percentage” for a fund balance that applies to all school districts, and the statutorily required budgeted two percent contingency amount should not be viewed as adequate. Rather, the particular circumstances of each district must be evaluated and considered, and the local school boards and superintendents are in the best position to make these determinations. It is therefore very concerning that the proposed solution to a budget providing inadequate funding for schools potentially puts the fiscal viability of schools at risk.

The budget is now in the hands of the General Assembly and they have a choice to make – Under our state Constitution the General Assembly is required to provide a system of public common schools that is efficient, free and equal to and for all students. This means they must provide school districts with the resources they need to meet this constitutional mandate.  The ultimate responsibility for funding education rests with the General Assembly, not local communities, which have been forced to contribute more and more as state funding has not kept pace with inflation over the past several years. Instead of adopting the proposal that districts spend down needed reserves to provide services, the General Assembly can make the choice to raise the revenues needed to meet this mandate so that school districts can operate in a fiscally responsible manner with appropriate reserves.