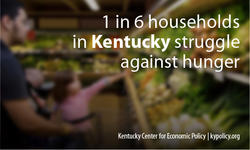 15.6 percent of Kentucky households report serious problems affording adequate nutritious food, according to new data released by the U.S. Department of Agriculture today covering the last three years. Of the approximately 285,000 Kentucky households experiencing food insecurity, some 113,000 experienced very low food security—meaning that one or more household members have had to reduce their food intake.

The continued high number of households struggling against hunger is further proof that food assistance remains critical for millions of families, seniors, disabled and unemployed Americans.

One of the most powerful weapons against hunger is the Supplemental Nutrition Assistance program (SNAP). Some 876,000 people in Kentucky participate in SNAP and use its benefits to help put a basic diet on the table each day.

SNAP benefits are modest, providing an average of $1.42 per person, per meal in Kentucky. Even so, they have a significant impact in reducing poverty. In 2011 alone, SNAP helped to lift 4.7 million Americans—including 2.1 children—out of poverty based on the federal government’s Supplemental Poverty Measure.

Today’s data are yet another indication that the economy still has not yet fully recovered from the deep recession and that millions of families continue to struggle with job loss, reduced wages and poverty. Yet, as early as next week, the U.S. House of Representatives is expected to consider legislation that would significantly cut SNAP by $40 billion over 10 years—potentially eliminating basic food assistance for up to 6 million people, including children, seniors, the unemployed, veterans and working families. These cuts would come on top of an already scheduled cut in benefits for every SNAP recipient beginning November 1, when a modest boost to benefits, included in the American Recovery and Reinvestment Act (ARRA) to help struggling Americans and boost the economy, expires.

The new numbers today show once again that the House proposal to deeply cut SNAP is incredibly misguided. Whether a person is unemployed and using basic food assistance to feed their children while they look for work, a senior having to choose between buying needed medication or paying for groceries, or a single mother who has a job but doesn’t make enough to put food on the table, SNAP provides a lifeline to people when they need it most.

The USDA’s full report on food insecurity in 2012 can be found here.