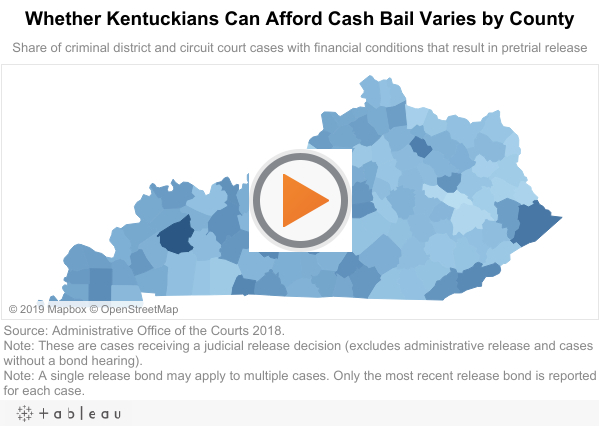 Kentuckians presumed innocent should not have their freedom contingent upon their income or where in the state they are arrested. But a new report from the Kentucky Center for Economic Policy shows widely varying rates between counties in the use of cash bail and in the ability of those arrested to meet monetary conditions.

The report, “Disparate Justice: Where Kentuckians Live Determines Whether They Stay in Jail Because They Can’t Afford Cash Bail,” explains that in addition to being unfairly applied across counties, cost-prohibitive bail has negative impacts on individuals, their families and communities. Defendants incarcerated pretrial lose income and employment, and are more likely to be found guilty in trial, receive harsh sentences and to plead guilty even when they are innocent.

“Defendants across Kentucky’s 120 counties shouldn’t face incarceration just because they can’t afford bail,” KCEP Senior Policy Analyst Dr. Ashley Spalding, said. “But the data suggests that they do, and that the state has a costly and arbitrary system of justice based on location.”

For instance, the share of cases granted release pretrial without monetary conditions ranges from just 5% in McCracken County to 68% in Martin County. And just 17% of cases subject to monetary bail in Wolfe County result in the defendant finding a way to make the payment while 99% do in Hopkins County. Over-incarcerating people pretrial also contributes to the overcrowding of our local jails.

“Reforming our dramatically inconsistent bail system should be a top legislative priority,” said Spalding. “Better standards can help address local disparities and make sure that, as a state, we limit the high costs of incarceration to our families and communities, not to mention local budgets.”

You can read the report here: Disparate Justice: Where Kentuckians Live Determines Whether They Stay in Jail Because They Can’t Afford Cash Bail